Arab parties push for unity ahead of Israeli elections

As the Knesset prepares to debate proposed laws that would significantly damage political activity by the Palestinian parties, Arab members weigh their options while debating ways to increase their collective power in parliament. 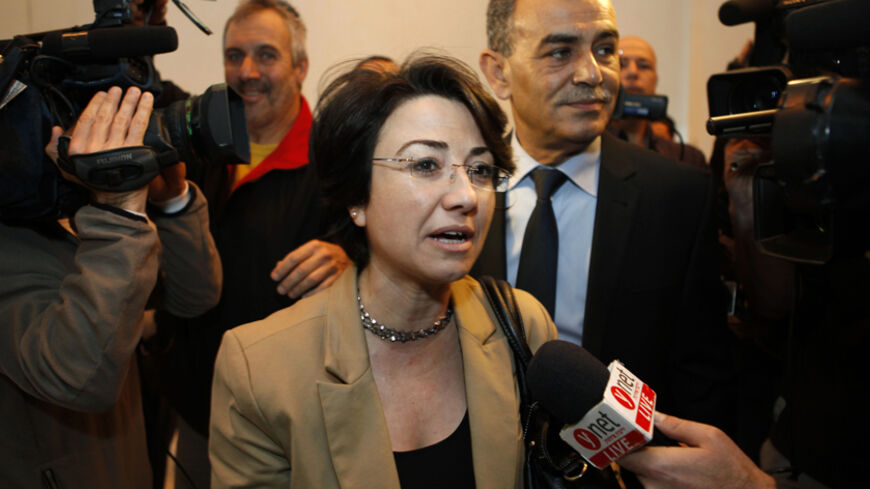 RAMALLAH, West Bank — The Knesset voted on Dec. 8 to dissolve itself as a prelude to the elections to be held on March 17, 2015. These elections will pose a major challenge for the Arab parties, as they will have to pass the new election threshold that has been raised from 2% to 3.25% to face a wave of controversial bills that the next Knesset will study, including the Jewish state bill and the pledge of allegiance to the Jewish state bill.

Al-Monitor learned that the Arab parties in Israel have begun consultations and meetings to form a unified list to run in the next Knesset elections.

Haneen Zoabi, a Knesset member from the National Democratic Assembly, told Al-Monitor that the increase of the electoral threshold to 3.25% means that many parties will not be able to pass this threshold alone, which requires that they come together on a joint list for unified Palestinian political representation.

"If a unified list is formed, our representation in the Knesset will increase to 15 seats. This will give us quantitative and political strength in facing Israel and it will be a catalyst to re-clarify Palestinian political consensus in the 1948 territories," said Zoabi.

Most Arab parties confirm the need to form a unified Arab list.

Antoine Shalhat, the director of the Palestinian Center for Israeli Studies, told Al-Monitor: "Entering the elections on a unified list is necessary and important to confront the [electoral] threshold law and other laws put in place by the Knesset, which indicate that no Arab list entering the elections alone can enter the Knesset."

It seems that the formation of a single parliamentary list is a popular demand of Palestinian citizens of Israel and an urgent need for them. This issue will remain on the negotiation table of Arab parties.

The importance of a unified list does not only lie in resolving the representation issue, but it will also help parties resist controversial bills that the Knesset might discuss in the future, namely the “Jewish state” draft law.

According to Arab politicians who shared their views with Al-Monitor, the ratification of this draft law would mean a tightening of freedoms for Palestinian citizens of Israel, an entrenchment of the apartheid policy and the legalization of racial discrimination, as well as opening the door to passage of more racist laws.

Zoabi said this bill confirms that "Israel is a Jewish state, not a democratic one." According to her, the bill seeks to give privileges to Jews and maintain a Jewish majority in society, as well as to ensure that Jews manage all public institutions, which she considers the embodiment of fascist ideology.

"Israel is trying to define itself as a Jewish democratic state, to allow for racism, control of land, the prosecution of the historical and geographic Palestinian presence within the 1948 territories and their political activities and to obtain the legitimacy of the world," she added.

Taleb el-Sana, head of the Arab Democratic Party, told Al-Monitor: "The proposal of this law represents a legitimization of racism and fascism and it is reminiscent of the laws of Nazi Germany. It grants superiority to the Jews and considers Arabs second-class citizens, even though they are the original citizens of the homeland."

It's expected that the approval of the draft law will have repercussions on the political activity of Palestinian citizens of Israel in various ways.

"There are 50 racist laws in Israel; some of them are apartheid laws," said Zoabi.

Regarding the future of political action under the proposed laws, Zoabi said, "In light of these laws [the Jewish state and loyalty-oath bills], the multiparty system is emptied of content. All parties must recognize Israel as a Jewish and a democratic state."

For his part, Sana said that these proposed laws would mean the end of political life for the Arab parties “because we refuse to be a part of improving and enhancing Israeli apartheid. We will work to expose Israel and its laws based on discrimination."

Afu Agbaria, a Knesset member for the Democratic Front for Peace and Equality, told Al-Monitor that in the event of passage, there will be no big change in the bad situation they suffer. The change will lie in the “legalization of racial segregation and its institutionalization, a suppression of freedom and discrimination which considers us to be second-class citizens," he said.

Shalhat told Al-Monitor that if the [Jewish] state law is ratified as a constitutional law, “the judiciary will be shackled. This will open the door for the passage of more laws that prosecute the political activities of Palestinians [in Israel]."

Shalhat said passage could pave the way for the ratification of other draft laws such as the loyalty-oath law, laws which restrict the work of Arab members of Knesset or exclude any deputy who expresses his or her position. This will lead to an environment that cracks down on all Palestinian political work in Israel.

On Nov. 26, the Knesset postponed voting on the "Haneen Zoabi Law," which allows the Knesset to discharge any member who announces his or her support for guerrilla actions against the occupation. According to the bill's author, Faina Krschenbaum, “Haneen Zoabi does not represent the Israeli Arabs, but she represents Hamas and the Islamic movement.”

Concerning the possibility that Arab parties might resort to boycotting the elections, Zoabi said that a boycott is a serious strategy, requires political consensus and the development of alternate mechanisms for political struggle.

“In the event that these racist bills are passed or if we find that our political strength has no actual impact on Israel, a decision to boycott must be a strategic decision that enjoys the consensus of all Arab parties," Zoabi said.

For his part, Sana said, "I think that if the law is passed there will be a decision from the Arab parties to boycott the Knesset elections."

"Until now, the [Arab] parties have not discussed this matter because the law has not been passed. However, we will wait until after the elections," he said.

While Israeli parties are preoccupied with forming alliances among themselves to enhance their chances of entering the Knesset, the main challenge remaining for Arab parties is to form a unified list. This is first to surpass the electoral threshold and enter the Knesset and then to confront the proposed laws the Knesset will discuss that affect the core life of Palestinian citizens of Israel.