What it means when Israel threatens to revoke citizenship

Many Arabs fear that Israel's increasing right-wing tendency will open the way for more laws targeting Arab citizens of Israel. 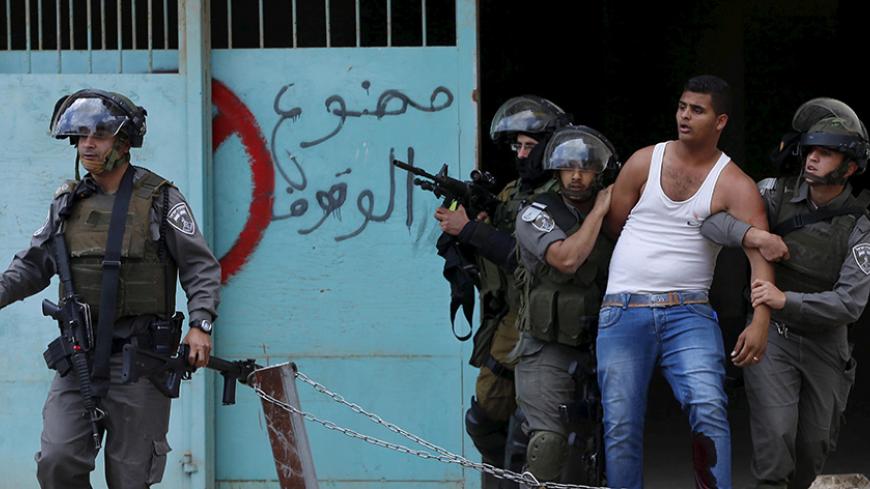 Israeli border policemen detain a wounded Palestinian protester who witnesses said was shot by the troops during clashes in the West Bank city of Bethlehem, May 14, 2015. - REUTERS/Ammar Awad

RAMALLAH, West Bank — Israel's proposal to strip Arabs accused of violence of their Israeli citizenship is angering those who say the plan proves the racism and discrimination practiced against them.

Israeli Interior Minister Silvan Shalom said Oct. 15 that Alaa Ziwad of Umm al-Fahm and Isra Abed of Nazareth should be stripped of their Israeli citizenship. Israeli police accused Ziwad of running over one Israeli and trying to stab three others Oct. 11, an act that he denied during an Oct. 12 trial. Abed died after police shot her Oct. 9 in the town of Afula for allegedly intending to carry out a stabbing. The media later broadcast a video that showed she was standing still when she was shot several times.

Also on Oct. 15, Israeli Justice Minister Ayelet Shaked announced she has started proceedings to strip the citizenship or permanent residency rights of perpetrators of attacks against Israeli soldiers and settlers and their families living in the 1948 territories.

Taleb el-Sana, head of the Arab Democratic Party in Israel, told Al-Monitor that threatening to revoke citizenship is an attempt to turn citizenship into “a favor or alms that the government is doing for us and can withdraw whenever it desires."

"This came as part of a vehement campaign that targets Arab citizens of Israel and goes in line with the bloody and racist incitement against us," he added. The measure will be challenged in the Supreme Court of Israel, and there will be international repercussions that "disqualify Israel from being a democracy, as it strips the citizenship of only its Arab, not its Jewish, citizens. … This represents an apartheid policy that reveals the fake democratic character of [President Benjamin] Netanyahu's government.”

Sana said the move to revoke citizenship is not based on any legal reference.

Sawsan Zaher, a lawyer at Adalah, the Legal Center for Arab Minority Rights in Israel, examines cases on withdrawing residency status from Palestinians. He told Al-Monitor, “Although the decision to revoke citizenship has not been implemented [yet], the fact that it was announced is a very dangerous and extremist step. This is because it is contrary to the principles of law, and it seems that Israel is moving forward toward implementing it, without paying any regard to the principles of international law and the Geneva Conventions, which prevent countries from stripping their citizens of the residency right.”

Citizenship status provides legal, social and political rights, including the right to run for Knesset elections, the right to vote in the general elections and the right to receive social allowances and health benefits. It also allows a citizen to live anywhere in the world without losing that citizenship or the right to return to Israel at any time.

Yet those holding permanent residency status do not have the right to run for Knesset elections or vote in the general elections. They must provide evidence of where they reside in Jerusalem or within the borders of Israel before they can receive any of the rights provided by the National Insurance Institute such as health insurance, children allowances, retirement and unemployment benefits, or before they can receive services through the Interior Ministry such as being issued an ID, travel documents, marriage and birth registrations, and spousal death certificates.

Israel has withdrawn residency status from thousands of Palestinians in East Jerusalem who were forced to move to the West Bank or who had traveled to Jerusalem, since it was occupied in 1967.

“The right to citizenship is the basis of all rights under the law and constitution, and it shall not be affected under the criminal legal proceedings," Zaher said. "Yet when [the issue] has to do with Palestinians, it is a different [story] for Israel. For instance, in 1995, the interior minister did not demand that [Israeli activist] Yigal Amir, the assassin of former Prime Minister Yitzhak Rabin, be stripped of citizenship. Yet [the minister] is threatening to do so with Palestinians. This proves that Palestinians are considered second-class citizens who are being subjected to racism and discrimination. Also, the Israeli law does not entitle the interior minister to revoke the citizenship.”

Antoine Shalhat, director of the Israeli Scene Supplement Unit at the Palestinian Forum for Israeli Studies and an expert on Israeli affairs, told Al-Monitor, “Israel can move forward with the decision to strip Arab citizens of their citizenship, and the facts show that Israel does not back down from anything and has no red lines.”

He added, “The Arab citizens of Israel have always been subjected to racism, which will not be halted as long as the Palestinian cause is not resolved."

On Oct. 14, Adalah and the Association for Civil Rights in Israel delivered a letter to Shalom, demanding that he reverse the decision to revoke the permanent residency status of Jerusalemites suspected of carrying out an attack.

Under a Supreme Court of Israel decision, Nadia Abu Jamal was evicted Oct. 1 from her home. On Oct. 6, Israeli soldiers then demolished the home. Jamal, who resided in East Jerusalem with her three children, is the wife of Ghassan Abu Jamal, who carried out a stabbing attack Nov. 18, 2014, in East Jerusalem.

Her brother-in-law, Muawiya Abu Jamal, had unsuccessfully appealed the decision to the Supreme Court. He told Al-Monitor that Nadia had a status of permanent residency in Jerusalem that was renewed automatically every six months, but "as a punishment for her and her three children, the Supreme Court rejected the appeal we lodged and confirmed the decision to evict her from Jerusalem.”

B'Tselem, the Israeli Information Center for Human Rights in the Occupied Territories, had tried to prevent her eviction, demanding months ago that Israeli authorities “immediately halt the punitive measures against the family members, who are not suspected of committing any offenses." The center also called for authorities to renew Nadia Jamal's residency permit and refrain from stripping her children of their status and rights, but those efforts also were unsuccessful.

According to B'Tselem statistics published in April, Israel stripped about 14,500 Palestinians of their citizenship rights in East Jerusalem from 1967 to 2014.

Many Arabs fear that Israel's increasing right-wing tendency will open the way to enact more laws targeting Arab citizens of Israel to consolidate the existing discrimination against them.