The Knesset is getting closer to passing the proposed suspension bill, which some fear would allow Arab members to be suspended over loosely defined violations. 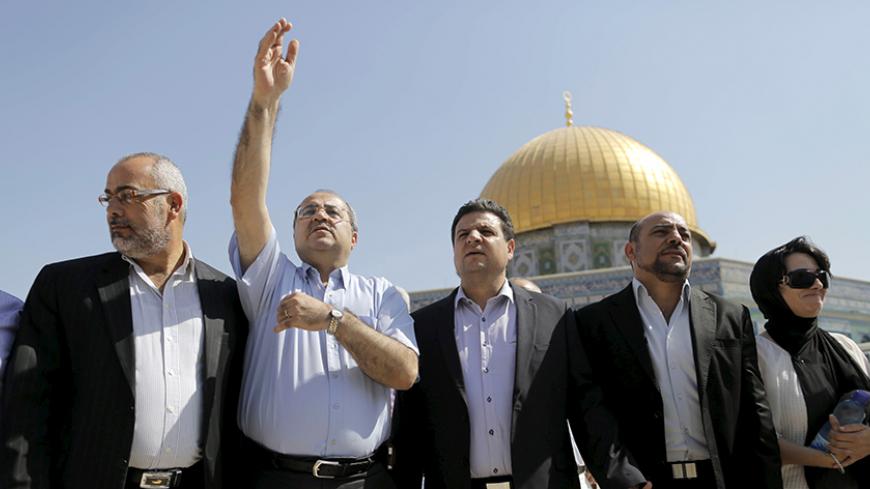 Israeli Arab lawmakers from the Joint Arab List (from L to R) Osama Saadi, Ahmed Tibi, Ayman Odeh, Masud Ganaim and Haneen Zoabi stand in front of the Dome of the Rock during a visit to the compound known to Muslims as Noble Sanctuary and to Jews as Temple Mount in Jerusalem's Old City, July 28, 2015. - REUTERS/Ammar Awad

RAMALLAH, West Bank — The Knesset ratified the first reading of Israel's suspension bill, which allows the suspension of Knesset members and targets Arab lawmakers on charges of committing treason or supporting any terror or hostility toward Israel. Lawmakers voted 59-53 in favor of the bill March 28.

On March 29, Shin Bet head and former Likud Knesset member Avi Dichter attacked the head of the Arab List, Ayman Odeh, threatening that he might end up like Hamas leaders Sheikh Ahmed Yassin and Abdel Aziz Rantisi, assassinated by Israel in 2004.

Israeli Prime Minister Benjamin Netanyahu backed the suspension bill after having led a campaign of incitement against Knesset members Jamal Zahalka, Haneen Zoabi and Bassil Ghattas from the Joint List's Balad Party. The legislators had met with the families of Palestinian men who were killed Feb. 2 while attacking IDF soldiers. The families had requested that the Knesset members help them recover the bodies of their children for burial.

On Feb. 8, the Knesset’s Ethics Committee decided to suspend the three Knesset members from their duties. Zoabi and Ghattas were suspended for four months and Zahalka for two months.

The bill allows the suspension of Knesset members for making statements against Israel or denying the existence of a Jewish democratic state, without specifying an appropriate suspension period, subject to the approval of 90 out of 120 Knesset members. The bill calls for suspensions to enter into force 10 days after a decision is made.

The bill aims to amend Section 7 of the Basic Law to define the reasons the Central Elections Committee may ban a candidate or a list and disqualify them from running in elections.

The bill specifies that while making the decision to disqualify, the Central Elections Committee may consider all the candidates’ statements, not only their declared objectives or actions.

Odeh, who heads the Joint List, told Al-Monitor that the suspension bill aims to exclude Arab political parties and leaders from legal and influential circles in Israel. Odeh explained that Netanyahu supported the bill after realizing the weight of the Arab public — some 20% of the population — in the last election after his failed attempt to weaken the Arabs’ parliamentary representation by raising the electoral threshold in the Knesset from 2% to 3.25%. It should be noted that Netanyahu’s move failed when the Arab parties formed their first joint list and were able to obtain 13 seats.

“The Knesset’s decision to ratify the suspension bill is unconstitutional because it contradicts a fundamental right: the election. Arab Knesset members are elected by the citizens and not by other Knesset members, and amending a Basic Law requires an absolute majority of 61 seats in the Knesset. This bill received only 59 votes,” Odeh noted.

For his part, Knesset member Massoud Ghanayem told Al-Monitor that ratifying the suspension bill upon the first reading sends the message that the government and the Israeli right want to disenfranchise Arab political actors by pushing Arab legislators out of the Knesset.

“The bill is dangerous, as it contradicts the essence of representative democracy by virtue of which the Knesset members were elected by the people, and therefore, Knesset members may only be suspended through the ballot box. The bill contradicts the principle of separation of powers and the essence of representative democracy,” he added.

The bill faces a second and third reading before being passed.

Political writer and analyst Nazir Majli told Al-Monitor that the bill came as part of a series of racist laws that the right-wing Israeli government is trying to pass to limit the work of Arab Knesset members.

Majli believed that the bill may be passed in light of the policies of the ruling Israeli right, which violates the values of democracy and treats Palestinians with arrogance and racism, relying on the wide support it receives from so many Israelis.

“Should Netanyahu continue and succeed in his quest to pass the bill, we will appeal to the Israeli Supreme Court and demand it issue a resolution against it,” Majli answered when asked about the possible recourses.

“The bill is unconstitutional but we do not know what the Israeli Supreme Court’s decision could be since it is biased and supports the policies adopted by the Israeli right,” he said.

Meanwhile, Ghanayem believes the Arab Knesset members should fight within the parliament to convince Knesset members to vote against the bill. “Should the bill be ratified after the second and third reading, we would have to resort to the Israeli Supreme Court, and should it refuse to annul the bill, we would turn to the popular struggle through the Arab follow-up committee and parties,” he said.

On Dichter's threats, Odeh said, “Dichter gave an inciting speech against me and he said i will have the same fate as Sheikh Yassin and Rantisi, in an attempt to turn the discussion over the democracy issue regarding the suspension bill into a discussion over the Hamas issue, in order to gain sympathy for the Netanyahu government.”

Odeh added, “We wanted to discuss the suspension bill within the Knesset and Dichter attacked me to turn the attention toward a different subject and incite the Israeli public against us.”

Most of the Arab Knesset members have received death threats at some point, as Odeh did Oct. 16, when a Knesset security officer told him he and other Arab members needed to take security precautions.

The suspension bill and the threats against Arab Knesset members come in the context of the ongoing harassment campaign against Palestinian political action. This campaign has included the banning of the Islamic Movement inside the Green Line on Nov. 17,  issuing a six-month prison sentence for Zoabi on charges of insulting a civil servant— a sentence that was commuted Feb. 7 — imprisoning former Arab Knesset member Said Nafaa in November for visiting Syria and blocking Balad Knesset members from attending Knesset sessions.

In light of the Knesset’s anticipated ratification of the bill, the Arab Knesset members are preparing to try to campaign for support from Jewish Knesset members. If they fail, the next step would be appealing to the Israeli Supreme Court. If both attempts prove unsuccessful, Arab parties in Israel will organize protests and make international political contacts to pressure Israel.