In an interview, Arab Knesset member Basel Ghattas warns of a growing trend where Israeli politics is no longer a fair game, which might lead to his faction leaving parliament. 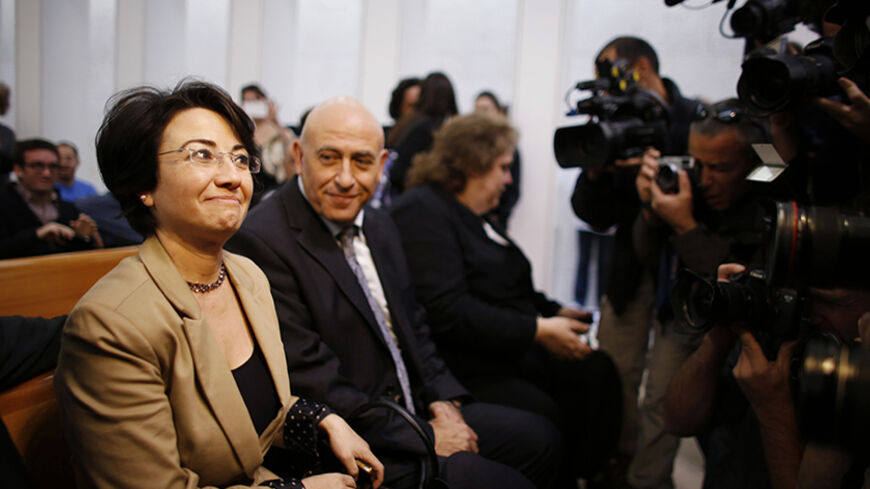 Knesset member Basel Ghattas managed to infuriate the members of the Committee to Advance the Status of Women and Gender Equality during a discussion on the topic of “women in the diplomatic security discourse.”

As soon as he was given the floor Oct. 28, Ghattas surprised everyone present by pulling a piece of paper out of his pocket and reading a powerful personal statement. It soon became clear that Ghattas was reading a speech by Knesset member Haneen Zoabi, a member of his faction and of the committee, who received a six-month suspension from the Knesset by the Ethics Committee for making “offensive statements.”

Zoabi’s text, which Ghattas read, included, among other things: “I believe that female politicians who incite against me are especially worthy of condemnation for the hypocrisy of their deeds. On the one hand, they are calling for women’s rights and the integration of women, while on the other hand, they have no qualms about attacking and excluding the only female Arab Knesset member, or in other words, the sole representative of Arab women, from the Israeli Knesset.”

The committee, headed by Aliza Lavie, did not like Ghattas' maneuver, claiming that he exploited an important discussion for the benefit of Zoabi’s campaign.

In the week in which the Knesset began its winter session, that was hardly the only incident to show how distant and encumbered the relationship between Jews and Arabs has become, even in the national legislature. The week began with the members of the Balad (Arab National Assembly) Party boycotting the Knesset’s opening session to protest the violence they encountered during heated demonstrations this summer against Operation Protective Edge, as well as to protest Zoabi’s suspension. They even went so far as to warn that they are likely to disengage from the Israeli parliament entirely in the not so distant future. Tensions escalated when the chairman of the Yisrael Beitenu Party, Foreign Minister Avigdor Liberman, called on them to carry out their threat.

As if the mood wasn’t volatile enough, Yisrael Beitenu is trying once again to pass its proposed muezzin law, which would enable silencing the muezzin’s call to prayer from the country’s mosques. The original proposal was shelved after public denunciation of it.

“We have decided to challenge and contest what is called ‘Israeli freedom of expression,'” says Ghattas in an interview with Al-Monitor. “We want to show how hypocritical it is.” The 58-year-old resident of Kafr Rama has a doctorate in environmental engineering from the Technion (Israeli Technology Institute in Haifa). He also happens to be a cousin of former Knesset member Azmi Bishara (suspected of espionage for Hezbollah). Ghattas is opposed to young Arabs serving in the Israel Defense Forces (IDF), and he doesn’t believe in partitioning the country.

Al-Monitor: It looks like the Balad Party decided to open the Knesset’s winter session in a belligerent mood. Is this a campaign against Israeli democracy?

Ghattas: We decided to challenge all issues pertaining to freedom of expression in Israel, so we protested against the violence used against us by the police at demonstrations. I was beaten by the police on several occasions, Haneen Zoabi was put in handcuffs, Knesset member Jamal Zahalka received a broken rib, and Knesset member Mohammad Barakeh was beaten until he was bleeding and thrown to the ground, even though they knew that he was a member of the Knesset.

I read aloud Haneen’s speech in the feminine form to emphasize how absurd it is that she could not be present at a discussion about the participation of women in making security decisions. We will not give in. We turned to the Supreme Court, and we will prove that she was treated far more severely than other members of Knesset, who did things that were far worse, like Knesset member Anastasia Michaeli, who threw a cup of water at Knesset member Raleb Majadele.

Boycotting the opening session of the Knesset was an act of protest. We cannot act as if everything is normal, when one of our Knesset members is suspended.

Al-Monitor:  Why did you threaten to withdraw from the Israeli parliament?

Ghattas:  There is a growing radicalization to the right. A decade ago, if we would have even mentioned the possibility of Liberman being foreign minister, everybody would have said that we were delusional. Today, settlers control the government. The foreign minister, the housing minister [Uri Ariel], the chairman of the finance committee [Nissan Slomiansky] and even the speaker of the Knesset [Yuli Edelstein] live across the border. That shows that the entire political map has moved to the settler-based right. In such an environment, it is very hard for me to engage in dialogue.

During my speech at the press conference, I noted that as a national minority, we convince the Arab public to vote in the elections. We tell them that there is freedom of expression, and that we can protect their interests from the Knesset. All of that has been cast into doubt, however, over the past few years. We are being removed from Knesset committees. Derogatory terms such as “traitors,” “terrorists” and “Trojan horses” are being used against us. This is the background for our statement that it would be very difficult for us to tell the Arab public that our activities on their behalf in the Knesset still benefit them. More and more of our people realize that there is no fair political game here.

I consider this to be a very worrying trend. Of course, Liberman is happy about this trend, but it is important to realize that without Arab representation, there will be no democracy here. We will withdraw and look for an alternative by building our own representational institutions.

Al-Monitor:  Balad stands out for its Arab nationalist agenda. It largely reflects the ideological radicalization of the Arab public against defining Israel as a “democratic Jewish state.” Don’t you think it would be better to work internally for the benefit of your community?

Ghattas:  Those are stereotypes. We operate extensively in that arena, too. It just doesn’t receive coverage in the media. When am I ever invited to the studio of a major media outlet? It only happens during wartime, or when they are looking for provocation, like the drafting of Christian Arabs into the IDF. I oppose that drafting, because I don’t believe that it will bring about real equality. Just look at the Druze villages. They serve in the army, but conditions there are still abysmal. Besides, I don’t think we should have to serve in an occupying army.

Al-Monitor:  What about national service?

Ghattas:  We are a national minority, not migrant workers. We are the indigenous population. We have certain rights that do not originate with us being citizens. That is why this whole dialogue about rights and obligations is unacceptable to us. The state should recognize this unique status, and the equality we enjoy should be total.

Al-Monitor:  Still, is everything really so bad here? Don’t you have anything positive to say about the Knesset?

Ghattas:  We didn’t come to the Knesset just to talk, but also to help our public. And the Knesset is a place where things can get done. We succeed in achieving certain things for our community, for example, in terms of the education budgets. I head the lobby to strengthen the Arab economy, and we bring such problems out in the open.

Al-Monitor:  What do you think about President Reuven Rivlin’s speech in Kafr Qasim?

Al-Monitor:  Have you already begun the process of uniting the Arab parties, which is being forced on you by the raising of the electoral threshold?

Ghattas:  This move was intended to block us, but in the end it will result in increasing the Arab representation. We are currently in the middle of initial contacts leading toward the unification of our parties. All those who wanted to eliminate us will end up getting 15 Arab Knesset members in a united party, instead of the 11 that there are today. This attempt to suppress us by raising the electoral threshold and this effort to disqualify us only increases the level of support we have in the Arab street.