A united Israeli-Arab party could force Netanyahu out

Polls indicate that if the Israeli-Arab parties unite they could become a real political power, but ideological and personal issues remain. 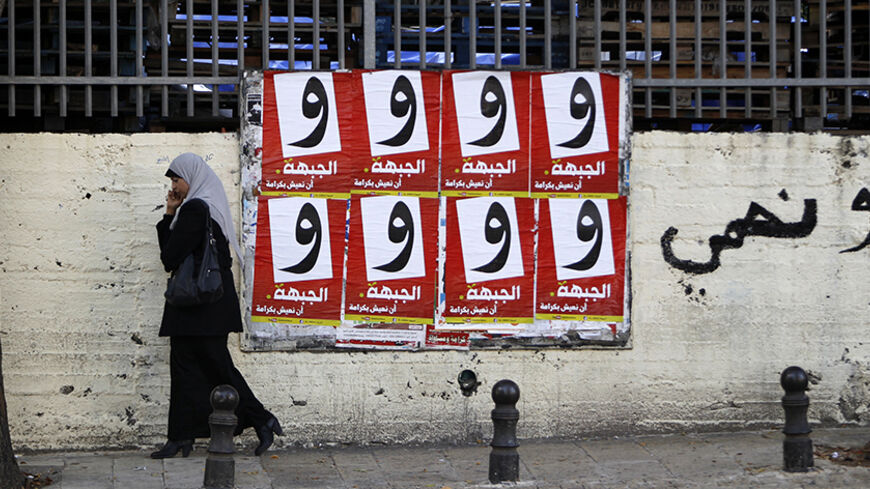 A woman walks past campaign posters for the Arab-led Hadash Party in the Israeli-Arab city of Umm al-Fahm, Dec. 26, 2012. - REUTERS/Ammar Awad

“After we get 15 seats, I am planning on sending flowers to [Foreign Minister Avigdor] Liberman,” Knesset member Jamal Zahalka, the Balad faction chairman, told Al-Monitor. "We owe him for this achievement. He united the Arabs.”

Ever since the die was cast in the Knesset Dec. 3 and elections were moved up to March 17, the Arab Knesset members have been trying to find the right formula for merging themselves into one party. The need for this arose when the vote threshold was raised to 3.25% at the initiative of Liberman, the Yisrael Beitenu Party chairman. Liberman argued that the change was needed to increase governability, via reducing the number of parties in the Knesset and decreasing the dispersal of votes. But many people argue — especially in the Arab public — that its objective was to harm Arab representation in the Knesset.

One way or the other, Liberman ultimately forced the Arab parties to unite, a process that was received enthusiastically in the Arab street. According to the polls, this is likely to generate a substantial rise in the sector’s voting turnout, increasing the number of Arab members in the Knesset.

Professor Asad Ghanem of Haifa University's School of Political Sciences said that the Arab street is keenly interested in a genuine unification of its elected officials. This has the potential of increasing the turnout in the Arab public from 53% in the last elections to 70%. This translates into three or four additional Knesset seats for the parties representing the sector; today, there are 11 for the Arab sector.

Ghanem was one of the few who supported raising the electoral threshold when the Liberman tempest raged on this issue, as Ghanem understood that the threshold change could lead to positive results. For years, Ghanem had tracked the decline in voter turnout among Arab-Israelis, and reached the conclusion that it stems from two causes: disappointment and estrangement from Israeli governments that ignored and neglected the Arab public, and internecine struggles among the Arab parties that were manifested in ego power struggles and ideological disagreements.

“In essence, Liberman did not leave the Arab parties any other option. If they won’t unite they’ll inflict harm on themselves; thus unification became an existential need. I see on Facebook and in the press that the atmosphere is in favor of unification, mainly among the youths,” Ghanem said.

He also sees this development as another instrument for defeating Prime Minister Benjamin Netanyahu. The larger and stronger the united Arab party is, the more influential becomes this instrument. “This is a very significant incentive for the Arabs who feel that Netanyahu adversely affects their status and changes the world order to their detriment. The nationality bill is part of that. This will get them out of their homes [to vote],” Ghanem said.

Knesset member Ahmad Tibi also expressed this sentiment in his speech during the discussion to dissolve the Knesset. He put his finger on the potential of the power of Arab parties to influence the chief political game.

“They won’t be able to change the regime without us. Numerically speaking, they will need us as an obstructive [political] bloc,” Tibi said.

The road to unity is not simple, however. The Arab parties became accustomed to competing with one another for the Arab vote. They hold personal passionate struggles and the ideological differences between them are not negligible.

Thus, besides the option of comprehensive unity, an alternate scenario of two separate unifications is also being examined: One is between Hadash and Ta’al parties — a unification that appears to be a natural merging of two secular parties that support President Mahmoud Abbas and the peace process between Israel and the Palestinians. The second merger would be between Balad and Ra’am, though this is more complex because Balad is a secular party while Ra’am has religious characteristics.

Another tension-arousing issue is how to determine who will head the united list. Last week, the Israeli news site ynet publicized the results of a survey taken by the esteemed pollster Yusef Maklada, from the Statnet institute. The survey probed the popularity of the various Arab Knesset members in the Arab sector, and found Tibi to be most popular. The results showed 47% of support for him, in contrast to single-digit percentages for other Arab Knesset members.

Ghanem feels that this internal survey is the appropriate apparatus for determining the personage to head the united electoral list. But other Arabs do not agree that the party chairman should be determined by a poll. Zahalka, for example, claims that these surveys do not accurately reflect the real mood of the public, and that the decision should be made according to the (relative) strength of the parties in the last elections. “Our ultimate goal is to run under one list. That is what our voters want. All the other details can be concluded in a few hours, including who will head the list,” Zahalka said.

Meanwhile, the pressing need for unity brought to the fore the joint interests of the Arab parties such as fighting racist legislation, discrimination and inequality vis-à-vis the sector. It also emphasized the differing styles and methods used by the parties in the past vis-à-vis the Jewish public, and within the Knesset. For example, Balad found itself struggling with an aggressive, ultranationalistic public image, mainly because of Knesset member Haneen Zoabi's statements on the Marmara affair. Only last week, the High Court of Justice rejected Zoabi’s appeal against the decision to expel her from the Knesset because of her extreme statements. Among large swathes of the Israeli public, Zoabi is viewed as someone who supports Palestinian terror, and in-depth surveys show that Israeli-Arabs also do not identify with her style.

To combat the party’s negative public image, the Balad Party began a “legitimacy” campaign a few weeks ago to demonstrate the party’s other faces. Toward this goal, the party hired the services of Jewish media consultant Emilie Moatti and held meetings with political commentators from key Israeli newspapers.

A few weeks ago, I met Zoabi and Knesset member Basel Ghattas in a hip Tel Aviv restaurant where we talked in a relaxed, easygoing atmosphere. Zoabi protested that she had become a terror-supporting "red flag" to the Israeli public, saying, “My vision is a democratic, civil one, based on democratic values, and in this vision, my nationality is important. I don’t want to throw the Jews into the sea, as the speaker of the Knesset [Yuli-Yoel Edelstein] said about me, and I feel closer to a feminist, democratic Jew than I do to an Arab who doesn’t believe in these values.”

Ghanem reckons that people in Balad also understand that the parties' images have suffered in the Arab public as well: “Israeli-Arabs don’t get up in the morning and say, 'We strive for a non-Jewish state.' Instead, they are preoccupied with their daily lives and want to improve them. Ultimately, all the Arab parties and their Knesset members will have to rise above themselves, their egos and quarrels, and unite in a genuine way. Otherwise they will squander a historic opportunity to increase their political strength and have real influence in replacing Netanyahu.”