In an interview with Al-Monitor, Arab Knesset members Haneen Zoabi, Basel Ghattas and Jamal Zahalka claim that the Israeli media categorize and demonize them in a way that prevents them from entering into a dialogue with the public. 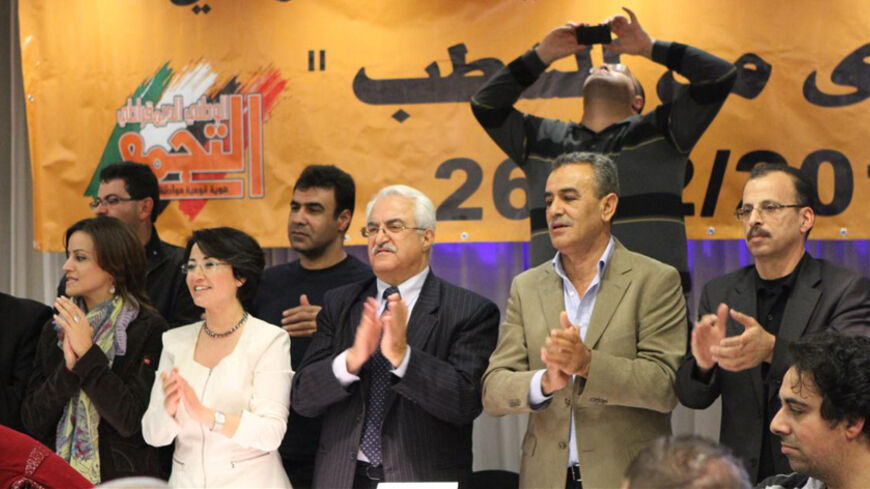 Knesset member Jamal Zahalka, who heads the Knesset faction of Balad (the Hebrew acronym for the National Democratic Assembly party), wrote his doctoral thesis on the effects of the active ingredient of hashish on the human body. But even when the debate about legalizing hashish recently became bon ton in Israeli politics and media, Zahalka stayed out of the fray. It was actually Knesset member Moshe Feiglin of the extreme right wing who became the star of the party.

Not surprisingly, in the few cases that Zahalka managed to break into prime-time television it was with a passionate, photogenic and particularly loud outburst.

For instance, when he clashed on a live TV broadcast in December 2009 with journalist Dan Margalit, after accusing then Defense Minister Ehud Barak of “listening to classical music and killing children [in Gaza],” Margalit lost it and kicked Zahalka out of the studio. Or when he was expelled from the Knesset’s Interior Affairs Committee in July by its chairwoman, Knesset member Miri Regev, after accusing Police Commissioner Yohanan Danino that his hands were “covered in blood.” This happened during a debate about police conduct in the kidnapping and murder of the three youths in June and the ensuing right-wing rioting. Regev, the darling of the extreme right, sent Zahalka to “Gaza” and showered him with a variety of “compliments,” among them “terrorist.” Needless to say, the video clips documenting these two incidents became social media hits.

Conventional wisdom has it that these kinds of media events actually serve Zahalka and his colleagues in the Balad faction — Knesset members Haneen Zoabi and Basel Ghattas — especially vis-a-vis their constituents and especially in highly charged times such as those in the wake of the Kafr Kana events on Nov. 8.

“It actually inflicts damage. Portraying us as supporters of terrorism hurts us,” Zahalka said in an interview with Al-Monitor. “In the end, the Israeli media influences the Arab public as much as the Arab media. When our public watches Hebrew-language Israeli TV Channels 1, 2 or 10, reads Israeli dailies Yedioth Ahronoth, Haaretz and Maariv and sees the mudslinging aimed at Zoabi, it affects them. We are slandered and demonized and we want to fight that. Our goal is to get people to listen to our positions, to argue with us, and this will not happen if we continue to be portrayed in a certain way.”

The Balad faction has translated this goal into a sort of “campaign for legitimization,” with the help of a Jewish media consultant, Emilie Moatti, who is well versed in the ins and outs of Israeli politics. She advised President Reuven "Rubi" Rivlin in his campaign for the presidency and in the past also advised Justice Minister Tzipi Livni.

The campaign will try to break through the barriers and stereotypes in the Israeli media that, according to the Balad members, prevent them from conducting a legitimate and businesslike debate about their positions because they keep getting typecast as “Israel-bashing provocateurs.”

Moatti said she was surprised to see the extent to which veteran political reporters and commentators were out of touch with the Balad Knesset members, “and it’s not because they don’t want to be in touch. There are barriers that have to be dismantled, and when you do that you find that there’s actually a willingness to listen and talk.”

In the meeting with Al-Monitor, the three Balad lawmakers try to explain why it’s worthwhile for the Israeli public and media to start listening to them and to engage with them in a down-to-earth political ideological discussion.

Al-Monitor: Why is it important for you to fight for your image, now of all times?

Zahalka: Because with all the background noise, no one listens to us. We represent a public and we have an interest in our voice being heard clearly. We want to debate. We present an alternative, and contrary to what people think, we have no interest in being maligned by the Israeli Hebrew-language media. I want people to know about my other activities. For example, I’m very active in the Knesset Committee on Education. I have also been trying to promote the Arab Peace Initiative for the past 10 years. But the Israeli media ignores us when it comes to these issues.

All of us — the members of the Balad faction — are people of much substance, with an education and a clear worldview. We want people to listen to us. We are portrayed as Hamas supporters and there’s nothing farther from the truth. It’s easiest to translate our protest against events in Gaza into this turn of phrase, and there’s no need to explain who this serves. So now we want to at least try and expose the public to our side of the argument.

We are by no means perfect. But we have a lot to contribute. Israeli politics is missing out when it doesn’t engage us in a debate.

Al-Monitor: This question is for Knesset member Haneen Zoabi. Most Israelis, even those who are distinctly left wing, have a hard time with you. They recall [your participation in] the [2010] Marmara flotilla and the demonstrations. You aren’t able to be heard beyond what seems like provocations.

Zoabi: Why provocations? There’s a gap between our image and the truth. We challenge the political discourse and we want to engage with the right. I present a vision and this is something people don’t want to hear. They don’t know that my vision is to live with the other. I don’t want to shut myself off, because my values are those of justice and equality, of a state for all its citizens. My vision is a democratic, civil one, based on democratic values, and in this vision, my nationality is important. I don’t want to throw the Jews into the sea, as the speaker of the Knesset [Yuli-Yoel Edelstein] said about me, and I feel closer to a feminist, democratic Jew than I do to an Arab who doesn’t believe in these values.

What does it mean saying about us that we are 'provocateurs'? I want to say that there is no need to incite people. They’re already provoked. We meet people who tell us, “You are our truth, keep going, come talk to the new generation, to the young people.” In 10 years, I’ll be moderate compared to them.

Ghattas: It’s important to say that the young Arab people are in a different place than the one we were in. There’s an example from just the past week: Under the influence of the activism on the social networks, after the events in Kafr Kana, our high school students decided to come to school wearing a kaffiyeh. Tens of thousands did so. It was tremendous.

This is a generation that was supposed to become Israeli. A generation about which [Israel's first Prime Minister David] Ben-Gurion said, “The old will die off and the young will forget.”

But it turns out that this generation has not forgotten. They are proud by virtue of the fact that they perceive themselves as human beings and civilians. My generation, when we were students in the 1970s, the Shin Bet would come visit us at night and beat us up. I remember once walking with a group on the street and a policeman stopped us and ordered us to jump. “Jump,” he said, and some jumped. This generation is different. If a policeman stops them, they ask why and know their rights.

Al-Monitor: What soul-searching have you been doing and what lessons have you learned?

Zahalka: Maybe we didn’t explain ourselves enough. I’ll give you a recent example of the difficulty we’re having. Before the Oct. 29 vote on Zoabi’s suspension from the Knesset, we spoke with quite a few Knesset members from the opposition, from all factions. Those who voted in favor of suspension or those who escaped the session explained their decision by saying that they could not vote against “because of the public.”

But it’s quite clear that suspending her was illegal and unethical, and this is the crux of the issue. We aren’t willing to be told, “Don’t exaggerate, why don’t you calm down?” The white man always comes to the black [man] and says, “Now’s not the time.” There’s a lot of hypocrisy on the part of the liberals and left-wingers.

When I see racism increasing, I say the struggle must be intensified. As far as I’m concerned, it’s a badge of honor when I manage to anger the racists. In an atmosphere of extremism, one mustn’t lower one’s voice. That’s why we are not part of the Zionist left. I think that ever since the Israeli left lit candles after [Prime Minister Yitzhak] Rabin’s assassination [in 1995] and displayed weakness vis-a-vis the right, it lost the battle. It was a historic mistake on the part of the left.