In an interview with Al-Monitor, Knesset member Jamal Zahalka explains why he and his colleagues met with families in Jerusalem, claiming he is being punished for doing his parliamentary work. 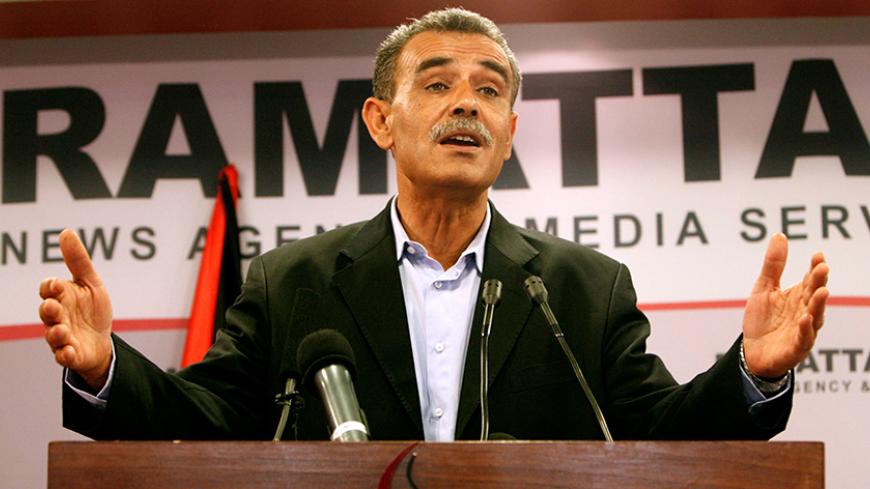 Jamal Zahalka speaks to the media during a news conference in the West Bank city of Ramallah, April 23, 2007. - REUTERS/Loay Abu Haykel

AMMAN — Jamal Zahalka has been a member of the Israeli Knesset in good standing for 13 years. He was first elected to the 16th Israeli legislature in 2003 and has been regularly re-elected since.

But the Palestinian member of the Israeli Knesset is now barred from speaking for two months in the Knesset plenary or in any of the committees on which he serves. Two other members of his Balad Party, Haneen Zoabi and Basel Ghattas, will be prevented from participating in the Knesset debates for four months.

In a phone interview with Al-Monitor, Zahalka explained that the Feb. 4 decision of the Ethics Committee against him and his colleagues “was purely political” and had nothing to do with ethics. The Ethics Committee deals with issues related to behavior and actions of Knesset members.

Zahalka, Zoabi and Ghattas are accused of showing sympathy with terrorists. Zahalka, however, said that the efforts of the parliamentarians to help families in East Jerusalem are “totally the kind of act a parliamentarian is supposed to do.”

The problems began when Palestinian families from East Jerusalem were unable to retrieve the bodies of their children more than four months after having been killed by Israeli security — often involving a violent interaction with Israelis. “The families tried, through their lawyers, to speak to the police, but were told that this is a political problem,” Zahalka said.

Zahalka, 61, and two other Knesset members went to an East Jerusalem cultural center Feb. 4 to meet with the families, and subsequently discussed these complaints with the Israeli police. Rather than engaging with them to negotiate the solution for this humanitarian problem, the meeting itself quickly became the focus of a vicious campaign led by Israeli Prime Minister Benjamin Netanyahu against the Arab Knesset members. “Netanyahu used our clearly parliamentary action to incite against us, saying we were paying condolences to terrorists even though our meeting was at a cultural center four months after the incident happened. Who pays condolences after four months?” Zahalka asked sarcastically.

While the three punished Knesset members could have appealed the decision in the Knesset and the Israeli Supreme Court, they chose not to. He said, “We realized that the decision will not be reversed and will only increase the incitement against us and our people."

Zahalka did not appear to be having second thoughts about having run for the Knesset. “We realize that we are paying a price for participating in the Knesset, but until this moment we feel the positive is bigger than the negative.”

Al-Monitor:  What is your response to the decision barring you and your colleagues from your legislative duties?

Zahalka:  The issue was that we visited families in East Jerusalem in response to the passing of months without the Israeli police agreeing to return the bodies of 11 Palestinians. The reality is that the people of East Jerusalem are entirely without representation. The Israeli government totally prevents the Palestinian government from representing them, and they are left without anyone able to speak on their behalf.

The grieving Jerusalem families have been trying to give their deceased children a proper burial, but the Israeli police have been holding their bodies for months. The families tried to speak through their lawyer to the police, but they were told that this is a political problem.

They approached us for help. We met with them, listened to what they had to say about the conditions being placed by the Israeli police, including when they can bury them, how many people can attend, the need to bury them outside Jerusalem and the condition that they don’t carry out an autopsy on the bodies. Some families accepted all the Israeli conditions and others did not. For example, some said, ‘We can’t control who comes to a funeral, this is the job of the police.’ Others said that they had no place outside of Jerusalem to bury their dead. We transmitted all this to the head of police the next day and he promised to get back to us. Next thing, we were the target of this unprecedented racist attack and incitement. This is unacceptable to do to the people of Jerusalem and requires international intervention.

Netanyahu used our clearly parliamentary action to incite against us, saying we were paying condolences to ‘terrorists,’ even though our meeting was at a cultural center four months after the incident happened. Who pays condolences after four months? We were also accused of having stood in silence for terrorists, although the reality is that we stand in silence all the time for all Palestinian martyrs and not for any specific ones.

The decision to keep us away from speaking in the Knesset and our committees does not include our right to vote. I have received a two-month punishment, while my colleagues Zoabi and Ghattas are barred for four months because they are repeat offenders in their eyes.

Al-Monitor:  Is a Knesset committee authorized to bar a duly elected member from representing his/her constituency?

Zahalka:  This is a new development. This punishment to keep members of the Knesset from speaking has not been used for 50 years. It was used against my colleague Zoabi for six months during the previous Knesset. This time it is used again under extreme political pressure by Prime Minister Netanyahu who basically railroaded the decision of the Ethics Committee. Although the committee is called the Ethics Committee, its decision was purely a political one.

Al-Monitor:  What was the reaction of your fellow parliamentarians?

Zahalka:  When the Israeli prime minister went on the Knesset roster and viciously attacked us, many bought in to his rhetoric even though our actions were totally the kind of act a parliamentarian is supposed to do.

We were also accused of having stood in silence for the [Palestinian] martyrs, although the reality is that we stand in silence all the time for all Palestinians and not for any specific ones.

Netanyahu’s speech was followed by Knesset speaker Yuli-Yoel Edelstein calling on the public to submit complaints against us. I thought that the job of the Knesset speaker was to safeguard the right of the members to speak freely, not to incite the public against our rights. Seven hundred people, including the prime minister himself and other politicians, submitted complaints, and once the case reached the Ethics Committee the decision against us was a done deal. I made a strong defense [case] to the committee, and some members told me that they understood our position. But the political pressure was clearly in play in the Ethics Committee, and their mind was made up irrespective of what we said.

Their decision was taken as a result of the demagogy of the prime minister who whipped up the entire Knesset against us using inflammatory words that included completely incorrect facts.

Al-Monitor:  What was the reaction of the people who elected you?

Zahalka:  The majority of the people support us for what we did in meeting the Jerusalem families and interceding on their behalf, both as a human act as well as a religious act. But some people were worried about the incitement that is being hurled against us, and they urged us to slow down.

Al-Monitor:  Can you do anything legally to stop the legal decision pertaining to the ban?

Zahalka:  We can appeal this decision to the entire Knesset and even to the Israeli Supreme Court. But we decided not to raise the issue in parliament or court, because we realized that the decision will not be reversed and will only increase the incitement against us and our people.

Al-Monitor:  Do you think the decision against you will become a precedent to a new trend? How do you think this affects the current parliamentary system of government in Israel?

Zahalka:  There is no doubt that Israel is becoming more racist and [leaning toward the] right wing. This is the reality. The prime minister was under pressure from the Organization for Economic Cooperation and Development to make a substantial share of the budget for the Arab community. Netanyahu is under pressure [by right-wing supporters] to balance this act by inciting against Arabs. He is also competing with [former Israeli Foreign Minister Avigdor] Liberman and [Education Minister Naftali] Bennett on who can be nastier to Arabs.

Al-Monitor:  The current government depends on a razor-thin 61-59 majority. How do you explain its resilience?

Zahalka:  The smaller the margin between government and opposition, the more resilient the government is because no one wants it to fall. Anyone withdrawing or voting against the government will fall, and they will all fall with it.

Al-Monitor:  How long do you expect the current government to last?

Zahalka:  I think it will take a long time [for the current coalition to unravel], as there is no serious discussion within government, and it is difficult for the opposition to be able to make any substantial effort to topple it. We realize that we are paying a price for participating in the Knesset, but until now we feel the positive is bigger than the negative.

Al-Monitor:  Does the latest decision make you second-guess your decision to run for office, or has it redoubled your will to keep pushing?

Zahalka:  The issue of whether to enter the Knesset is a gray area. There are reasons for participation and there are reasons not to participate. For us until now, the positive by far outweighs the negative. Some argue that by participating in the Knesset, we give the State of Israel a chance to claim that it is a democratic country. We are accused of providing a fig leaf to cover up for the lack of democracy in Israel. On the other hand, we feel that our role is important to our own people, and the fact that they are trying to silence us is perhaps the best proof that being in the Knesset has some real advantages.

We are speaking out, and today this is the third interview I am giving to an English-language media outlet; this means that being in the Knesset does not silence us despite the latest efforts. No one had paid any attention to the problem of the bodies of the Jerusalemites until we intervened. We are close to our people and we are working with them, but the moment we feel that being in the Knesset is more of a liability than an asset to our central goal of representing our people and speaking on their behalf, we will not continue. We realize that we are paying a price for participating in the Knesset, but until now we feel the positive is bigger than the negative.