Were these Knesset members wrong to meet with the families of attackers?

Joint List Knesset members are shouting over the din to explain that their controversial visit to families of attackers was to discuss releasing the bodies of their sons and not a demonstration of solidarity. 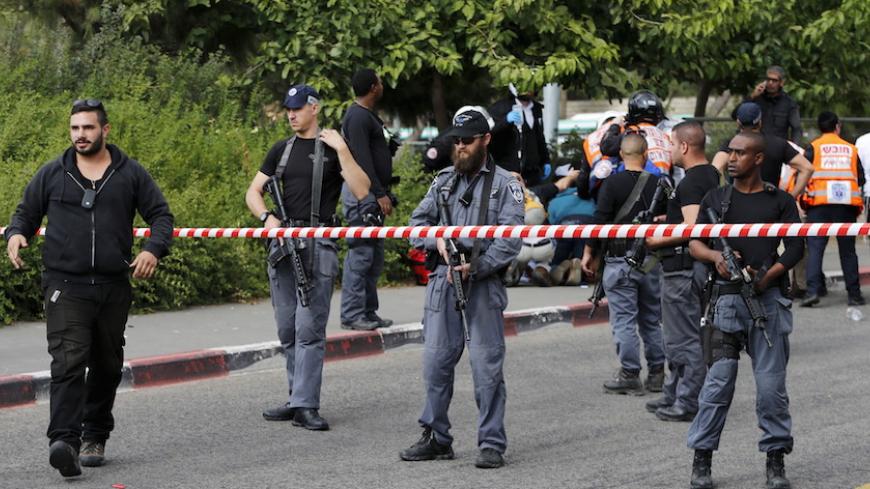 Israeli policemen stand guard at the scene of a stabbing attack in Jerusalem Oct. 30, 2015. - REUTERS/Ammar Awad

On Feb. 4, the media reported a meeting in East Jerusalem between Knesset members from the Balad Party (part of the Joint List) and the families of perpetrators killed while attacking Israelis. The reports carried the impression that Knesset members Haneen Zoabi, Jamal Zahalka and Basel Ghattas wanted to convey their condolences to the families for the deaths of their sons. Yedioth Ahronoth's headline read, “Embracing Terrorists.” Many other news outlets used the term “condolence visit.”

According to Maan, the Palestinian news agency, the meeting was attended by the father of Baha Aliyan, who murdered three Israelis in an attack on a bus in the Armon HaNatziv neighborhood of Jerusalem on Oct. 3. The report went on to say that the Knesset members stood in a moment of silence in memory of the attackers. The legislators told a different story, stating that the objective of the meeting was to address the bureaucratic procedures of returning the bodies to their families. Their explanation did not, however, stop the event from becoming a huge public storm in Israel.

“I try to imagine what would happen in the British Parliament or the US Congress if MPs or members of Congress would stand at silent attention for murderers of British or American citizens. I think that there would be a very major outcry, and rightly so,” said Prime Minister Benjamin Netanyahu at the weekly Cabinet meeting on Feb. 7. The prime minister further said that he would advance legislation to suspend Knesset members who meet with the families of terrorists. The Zionist Camp also stated in no uncertain terms that the meeting “encourages more terrorism and the murdering of innocent people.” Knesset member Ilan Gal-On from Meretz said that the Arab Knesset members had “lost their bearings.” Internal Security Minister Gilad Erdan called for recently appointed Attorney General Avichai Mandelblit to find out whether that meeting constituted support of terrorism.

Balad members contend that if the prime minister’s legislation goes through, Justice Minister Ayelet Shaked will have to be suspended too for meeting last December with the family of one of the suspects in the murder of the Dawabsha family from the West Bank village of Douma.

Zahalka, Zoabi and Ghattas are considered agent provocateurs in the Joint List, the umbrella body over all the Arab parties. They are said to give Knesset member Ayman Odeh, the faction’s chairman, quite a headache. Speaking to Al-Monitor on condition of anonymity, a member from the Hadash Party said that Balad members wantonly sabotage all of Odeh’s attempts to convey messages of reconciliation and coexistence.

Ghattas told Al-Monitor that he and his colleagues were very surprised by the intense reaction and their “mobbing” across the political spectrum. According to him, all he and his fellow parliamentarians wanted was to promote a humanitarian cause and serve as brokers in the matter of bringing the bodies of attackers for burial. For the past several months, Balad has been working to find a compromise between Erdan and the families from East Jerusalem for the bodies to be returned.

In a Feb. 8 Haaretz article, Erdan explained that he had instructed to block the release of the bodies after the families failed to meet Israel’s terms. He wrote, “We have learned from past experience. Many funerals for those were killed during an attack turned into rallies of hateful incitement and provocation. The praises for the martyrs encouraged young attendees to join the cycle of violence.” Erdan’s statement intimates that the issue of the bodies was indeed on the table at the meeting in East Jerusalem.

Ghattas said, “We contacted the minister and asked him why he was holding up the release. He promised that it was about to be resolved.” Three weeks ago, he noted, Israel released four of the 14 bodies in its custody for burial. Arab Knesset members, he added, tried to come up with a solution to the dispute over the 10 remaining bodies. “The families turned to us for help. Last Monday [Feb. 1], we met with Erdan and told him that the families accepted all of the demands. We asked him why the military was releasing the bodies of assailants from the West Bank but putting the residents from East Jerusalem through hell.” Ghattas added that Erdan asked Balad members to elicit more information from the families to facilitate a decision. The following day they went for the meeting in East Jerusalem — now the cause célèbre. Ghattas claims he and his fellow lawmakers were under the assumption that they were in the very least acting with Erdan’s knowledge, if not his express approval.

Al-Monitor has learned that a committee representing the families asked for a meeting with the members of the Joint List, but only Balad’s members responded favorably. Odeh reportedly told Hadash Knesset members that such a meeting would only hamper the efforts to bring the attackers home for burial, causing real damage to the umbrella faction. According to Ghattas, however, there were a variety of reasons why other members from the Joint List did not attend the meeting. “They didn’t show up because of some confusion and also the invitations were sent at the last minute. The committee representing the families botched the whole thing with the invitations; some got them, others didn’t.”

The Knesset Ethics Committee will convene in the coming days to address complaints against Balad’s members. Even other Joint List members plan to rein them in. Maybe it is too early to start talking about the Joint List faction’s demise. However, there is no doubt that Balad’s members have managed to rock the faction’s boat, and it might not be able to ride out the storm during these highly charged times.