With Knesset member Basel Ghattas accused of smuggling phones to prisoners, and with a prominent activist expressing support for the Assad regime, the rift between the Israeli Arab population and the Arab Joint List is growing deeper. 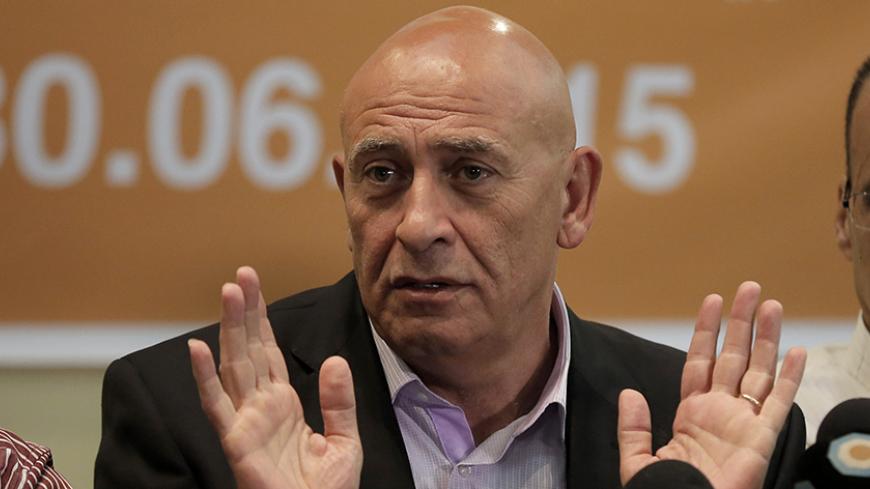 The past week was one of the hardest time periods in the short history of the Arab Joint List, and especially for its chairman, Ayman Odeh. It all began on Dec. 16 when Adal Amar, the head of Maki (the Communist Party faction within Hadash, which itself is part of the Joint List alliance), publicized a statement congratulating Syrian President Bashar al-Assad for conquering Aleppo. The statement generated a tempest even among the supporters of the Joint List. Two days later, it was revealed that Knesset member Basel Ghattas (of the Balad Party, also part of the Joint List) is suspected of smuggling cell phones to Palestinian security prisoners in the Israeli Ketziot jail; this, of course, delivered a significant blow to Odeh’s attempts at building bridges between Jews and Arabs. But an even more severe a problem from Odeh’s vantage point was that sections of the Arab sector also wondered aloud whether their Arab Knesset representatives were indeed serving the interests of Arab citizens of Israel, or whether their representatives had, instead, become a millstone around their necks.

There is no doubt that members of the Balad movement — one of the four parties that make up the Joint List — are viewed by the Arab public as the “bad boys” of the forced political union. The party’s founder, former Knesset member Azmi Bishara, even fled to Qatar in 2007 after coming under suspicion of transferring information to Hezbollah. Three Balad Knesset members today — Jamal Zahalka, Haneen Zoabi and Basel Ghattas — have long since adopted a radical platform that differs greatly from the positions of the other Joint List members. Hardly a month goes by without a public storm initiated by one of the Balad members, who are responsible for creating more and more deep fissures in the Joint List, in the Arab sector and in Jewish-Arab relations. In an attempt to maintain the Joint List’s political unity, Arab Knesset members from other factions feel compelled to toe Balad’s line.

Lack of space prevents me from enumerating the list of controversies provoked by Balad’s members in the Knesset and outside it. In the past year (June 29), Zoabi called Israel Defense Force soldiers “murderers” from the Knesset podium. In this way, she helped create the public atmosphere that facilitated the ratification of the Dismissal Law. This law allows Knesset members to oust a fellow member from the Knesset after winning a special majority vote and after a relatively complicated process. Meanwhile, the entire Joint List felt obligated to stand at Zoabi’s side — although behind closed doors, many of them admitted that they felt that Zoabi had crossed a red line.

Ghattas also forced Joint List members to close ranks with him. On Sept. 14, while former President Shimon Peres was fighting for his life in the hospital, Ghattas publicized a malicious Facebook post in which he wrote, “Let us remember his true essence as a tyrant. He was directly responsible for various atrocities and war crimes which he committed against us. … He is completely covered with our blood.” This post forced all the Arab Knesset members to later boycott Peres’ funeral, thus leading to a large public protest within Arab society and causing an additional rupture between Jews and Arabs.

But now, so it seems, Ghattas has become embroiled in something far more serious than an infuriating statement. He is under suspicion of smuggling 12 cell phones to Palestinian prisoners, one of whom is life prisoner Walid Daka, murderer of soldier Moshe Tamam (August 1984). If the suspicions against him are confirmed, this act of an Arab Knesset member will inflict great harm on the Arab citizens of the State of Israel. True, it would be a criminal act of one Knesset member out of 13 members of the Joint List. However, the Jewish public would grasp this as incontestable proof of the veracity of the accusations coming from the right (including from Defense Minister Avigdor Liberman) that Arab citizens are not loyal to the State of Israel. And so, right-wing Knesset members have already asked Knesset speaker to conduct body searches of the Arab Knesset members prior to entering Knesset chambers, claiming that they might try to smuggle in demolition charges.

Clearly, these accusations of disloyalty and treason have not a grain of truth in them. Instead, Odeh and fellow Knesset members Ahmad Tibi, Aida Toma-Sliman, Yusuf Jibrin and others are fighting for their right to preserve their Palestinian identity while remaining faithful citizens of the State of Israel.

As aforementioned, the Ghattas incident was not the only bombshell visited on the Joint List in recent days. While atrocious photographs were streaming from Syrian Aleppo showing mass murders of civilians by the hands of the Syrian army, Amar found time to congratulate Assad. This statement by Maki's secretary-general in turn stirred up the Hadash faction and turned large swaths of the Arab sector against him; all these viewed Amar’s statement as support of the acts of a mass murderer.

“I have been a Hadash member for three decades,” an Umm al-Fahm resident told Al-Monitor on the condition of anonymity. “I have never been as ashamed as I was this past week. Assad murdered hundreds of thousands in cold blood; he operated planes and tanks and heavy weapons to kill his citizens, only to protect his regime. Suddenly, along comes the Hadash senior official to congratulate him. How does he dare speak in my name?”

Amar’s statement forced Odeh to release a second, moderating statement in his attempt to tone down the rhetoric and conduct damage control. Odeh called Assad "a tyrant,’’ and Jabhat Fatah al-Sham (formerly Jabhat al-Nusra) and the Islamic State “savage groups.” The Joint List chairman also said that it is inhumane to take the side of these forces of darkness. However, the public damage to the party had been done.

A protest rally, organized by the anti-racism Tag Meir movement, took place Dec. 18 in Israel against the carnage in Syria. Hundreds of people formed a human chain between the US and Russian embassies in Tel Aviv, calling on the world powers to put an end to the massacres. They held photos of dead children and pictures of Assad with blood-stained hands. In the past, Hadash activists would take part in demonstrations such as these; Hadash is a socialist party that worked hard over the years to show the world that it is a social rights-humanist movement struggling for social justice. But this time, Hadash's voice was muted; its activists have vanished. Therefore, those who claim that Arab Knesset members inflict damage on their constituents and create deep ruptures between Jews and Arabs are not far from the truth.