Talking to Al-Monitor, Arab Knesset member Basel Ghattas explains why he slammed former President Shimon Peres, who is hospitalized and in critical condition. 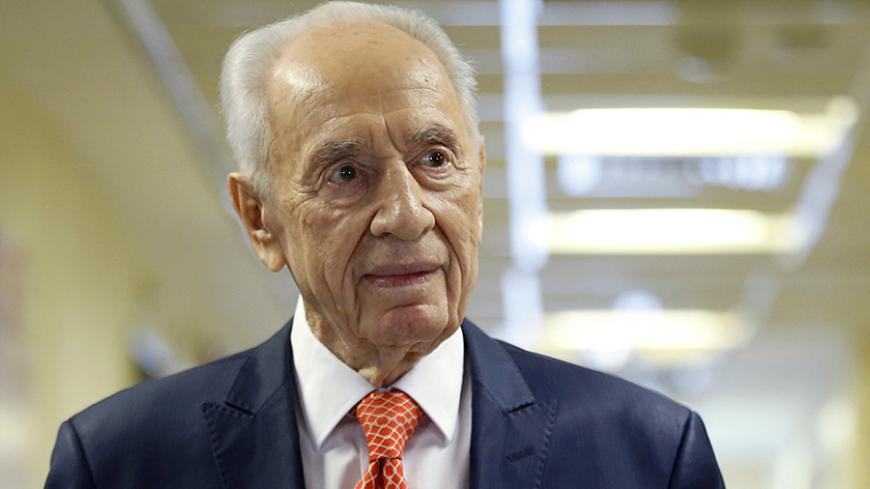 Former Israeli President Shimon Peres delivers a statement to the media as he is discharged from a hospital near Tel Aviv, Jan. 19, 2016. - REUTERS/Baz Ratner/File Photo

Knesset member Basel Ghattas of the Balad Party, one of the three factions that form the Joint List of predominantly Arab parties, is not taking back a single word of the harsh comments he wrote about former President Shimon Peres, 93, who is hospitalized in serious condition after suffering a major stroke.

Several hours after it was reported that Israel's ninth president was in intensive care in a medically induced coma and doctors were fighting for his life, Ghattas wrote on his Facebook page, “Is Peres' inevitable end coming close? We don't know. He has seven lives. But he is without doubt on his final journey. We must remember that he is one of the pillars of the arrogant, imperialist Zionist enterprise, and of the settler enterprise, along with being one of the most heinous, most brutal and oldest in terms of age and results. He is the one who inflicted the most damage and brought a plethora of disasters to the Palestinian nation and to the Arab world … our blood covers him from head to toe."

In the first interview he has given since the storm erupted over his post, Ghattas told Al-Monitor, “I did not wish for his death, but what I wrote is exactly what most Arabs in Israel think. This is how he is perceived in our narrative and memory. Before the collective festival of agony and sadness begins, I wanted to tell people that this man is not the dove of peace he is made out to be. This is the man who engineered Oslo [Accord in 1993], which for me and for most of the Arabs is a disaster.”

Ghattas’ attack on Peres, whose name for many in Israel and around the world is synonymous with peace, caused great consternation among the Arab members of Knesset. Al-Monitor sought comment from the chairman of the Joint List, Knesset member Ayman Odeh, who like the rest of his party colleagues refused to be drawn out. Only Knesset member Aida Touma-Sliman agreed to say that just because she and Ghattas are members of the same Knesset faction does not mean they think alike. “When someone is fighting for his life it is customary not to say something that is critical, although [late Prime Minister] Ariel Sharon also came in for criticism [when he was in a prolonged coma] and [former Knesset member] Yossi Beilin also said harsh things about [former Minister] Binyamin Ben-Eliezer,” she said. According to Touma-Sliman, the fact that the condemnation emanated from an Arab legislator generated a disproportionate response.

In an interview with Al-Monitor, Ghattas said he understands the accusations about the troubling timing of his words, but doesn’t accept them. “So far I’ve refused to comment in the media. A few short remarks were aired on Channel 2 but recorded without my knowledge. But now I’m telling you loud and clear: I am not going back on what I wrote about Peres and I also don’t understand why people were surprised. Oslo was one of the ways Peres succeeded in not resolving the conflict and rather in perpetuating the occupation. He did not want a separation into two states because after Oslo he was also responsible for the expansion of the settlements.”

Ghattas:  When was he even in a position of power?

Al-Monitor:  Don’t you think you’re harming the line taken by the Joint List, led by Chairman Ayman Odeh, who calls for Arab-Jewish coexistence and life side by side?

Ghattas:  I did not cause any damage. If — to obtain equality and rights — the Arabs in Israel have to please the Jews or to be "good Arabs," we have already learned that this is not the way. Even when the Arabs voted in the past for Zionist parties, the result was that they suffered more. The way to achieve equality is only through struggle.

Al-Monitor:  You’re in the Knesset and you were elected by your constituents to advance the interests of the Arab citizens in the State of Israel. Do you believe that such statements advance the Arab sector?

Ghattas:  No one is doing us a favor by allowing us to be in the Knesset, and especially the Zionist left wing is not doing us any favors by allowing us to express ourselves. We have been robbed of our freedom of speech. We receive blow after blow on a daily basis and our margins [of ability to speak freely] are being shrunk. The reason we are in the Knesset is only because of that freedom of expression that we want. We’re not interested in being cast as agents who kowtow to the ministers in order to get benefits of some kind.

Al-Monitor:  What about the claim that you’re causing damage to a whole group of people who want to live peacefully with the Jews?

Ghattas:  We are a people devoid of rights, oppressed, whose lands are expropriated and who are shortchanged in budget allocations, and yet somehow we are always to blame. Not those who hold power and hold budgets. This is how we have been turned into the guilty party. If things continue this way, we will come to a decision not to take part in national elections, as we decided in 2002. We in Balad are seriously debating this issue.

Al-Monitor:  Do you think the Joint List — with all its internal disagreements — especially involving the scandals generated by Balad, will run in the next elections?

Ghattas:  Yes, it will not be easy. I think only idiots would dismantle the Joint List, which has achieved great power.

Al-Monitor:  Ayman Odeh did not want to comment on your remarks. Why do you think he’s silent?