In an interview with Al-Monitor, Israeli-Arab Knesset member Basel Ghattas says that contrary to claims by right-wing Knesset members, the Marianne flotilla was not an act of violence, but a political one, drawing international attention to Gaza by peaceful means. 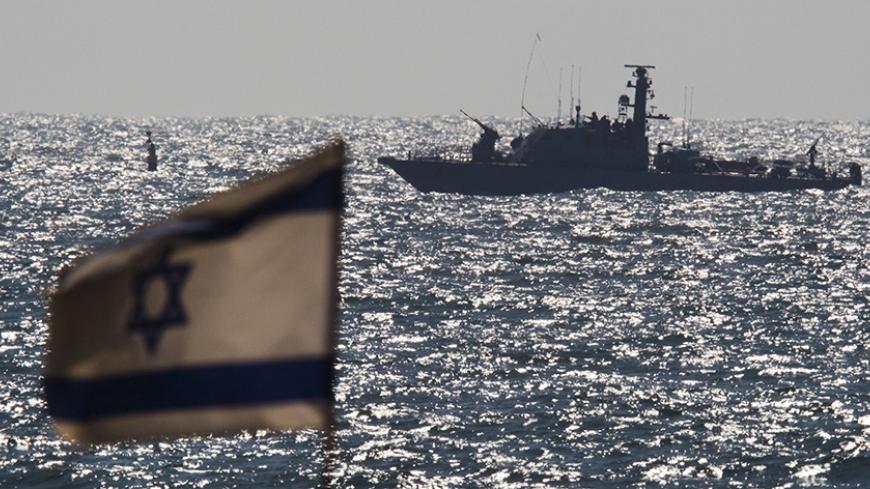 An Israeli naval vessel is seen in the Mediterranean Sea outside the port of Ashdod, Israel, June 29, 2015. - REUTERS/Amir Cohen

On July 6, Israeli-Arab Knesset member Basel Ghattas of the Joint List, a unified slate of predominantly Arab parties, resumed his parliamentary work after a few days of absence while he was on board the Swedish boat Marianne, which took part in the Gaza-bound flotilla. He has drawn many insights and conclusions from the flotilla. But for now he must respond to questions from the Knesset ethics committee about the funding and objectives of the flotilla. Several complaints were lodged against him by a number of right-wing Knesset members who alleged that Ghattas exploited his parliamentary immunity by participating in an activity that sought to harm Israel diplomatically, in what some of them dubbed a “terrorist flotilla.”

Yet, Ghattas remains unfazed. He even seems to be enjoying the attention and the possibility of keeping the flotilla on the public agenda. Replying to the ethics committee, he noted, among other things, that he did not break the law, that all he did was to take part in a flotilla with a political objective and all of the flotilla participants and organizers were peace seekers. In an interview with Al-Monitor, Ghattas said that prior to his departure, he made sure there were no problematic people or weapons on board and that it was proven that the objective of the flotilla was political and humanitarian, namely to raise international awareness of the blockade on Gaza.

Al-Monitor:  Despite checking everything in advance, weren’t you worried that the flotilla would end in violence?

Ghattas:  I don’t think I took a big risk. I took part in a legitimate political activity. Yet what you can’t say about me is what the chairman of the Yesh Atid Party, Yair Lapid, said — that I support terrorism and that this was a terrorist flotilla. The fact that the former Tunisian president, Moncef Marzouki, took part in it is yet further proof that that was a flotilla of peace. Marzouki is the ultimate human rights activist in the Arab world — himself a victim of the former regime. This reinforced my opinion that that was the direction of the flotilla. But here, politicians, chief among them Netanyahu, are trying to claim that every flotilla is the Mavi Marmara with a belligerent cause. Our objective was to get recognition that it was a nonviolent, weapons-free flotilla. We wanted to put the issue of the blockade on Gaza at the top of the agenda.

Al-Monitor:  Do you think this objective has been accomplished?

Ghattas:  Certainly. It put the blockade on Gaza back on the agenda. True, it was only for a week, and now the world is focusing again on Iran and Greece. We need to think how to break through this barrier. But as far as I’m concerned, you can’t sit idly by when 1.8 million Gazans are under a blockade, because this will lead to another war in a few months and I want to know that I’ve done something to avert this. Besides, we accomplished our goal to prove to Israel and to the world that the Israeli allegation that that was a terrorist flotilla was wrong. To my mind, the next flotilla will begin at a different starting point than ours, since we had to prove every step of the way that we weren’t terrorists. I think that for next time we need to have on board also Jewish Knesset members, celebrities, artists and peaceniks. This will boost the flotilla.

Al-Monitor:  What was your most memorable moment during the flotilla?

Ghattas:  There were many dramatic and thought-provoking moments. For example, the negotiations that took place when we approached Israel’s territorial waters. Israel’s military forces didn’t want to board the ship due to the lessons learned in the aftermath of the Mavi Marmara incident. They were concerned that it might escalate and get out of control, so they conducted negotiations. They sent someone from the Shin Bet who talked to me in Arabic over a megaphone. He told me that he had read some article I had written before the elections in which I said that our constituents want us to deal with internal affairs and not with the Palestinian issue. This was amusing because he could have spoken Hebrew or English with me so that everyone could understand, but that’s part of the Shin Bet’s mentality.

Later I found out that the commander of the Israeli navy was also there, with 13 vessels surrounding us and drones buzzing above us, and probably also submarines, that escorted us all the way to the port of Ashdod. That was amazing. All we had was a small vessel with some 20 peace activists, but such disproportionate resources were used to stop us. For me, this demonstrates the Israeli weakness in terms of the international arena. This is a great weakness that should be taken advantage of.

Al-Monitor:  Concerning what the Shin Bet person told you — according to many polls, the Arab population in Israel wants you, their Knesset representatives, to deal with internal affairs. How does your participation in the flotilla serve your voters?

Ghattas:  We’re not playing the Israeli political game according to the rules that they want to dictate to us. As for your question, 95% of my parliamentary work is devoted to internal affairs. But when I get a chance to also serve the Palestinian cause, which is also my own, I will take it. That’s also my struggle. Gaza is mine. We are one people. Part of my people suffers from a humanitarian crisis, which is what the United Nations is saying. Gaza is under a blockade, and a year ago we saw a vicious war that claimed 2,200 lives. Obviously, I care and it affects me.

Al-Monitor:  In terms of priorities, what comes first — internal affairs or the Palestinian issue?

Ghattas:  Internal affairs. Most of my parliamentarian activity focuses on this. But it’s legitimate for me to give all I have for the Palestinian struggle as a representative of that people, just as it is legitimate for me to be a leader of a public that works for education and equal employment opportunities for women. Don’t pigeonhole us. The problem is that we’re constantly demonized in the discourse of the Israeli media. We live in difficult times and find ourselves at a low point. People see what’s going on in the Arab world and it affects them. They’re also affected by what’s happening within the Palestinian arena in terms of the unsolvable dispute between Hamas and Fatah. It’s only natural for it to trickle down into the discourse and for people to say, "Take care of your own affairs and why do you care about what’s going on in Gaza." But I think that it is our responsibility to strive for a just solution and that doesn’t contradict my work in the area of internal affairs.

Al-Monitor:  Concerning the July 3 incident, in which a Binyamin Brigade commander killed a Palestinian youth who threw stones at him — instead of waiting for the military police investigation, why did you rush to react by calling him a murderer?

Ghattas:  My first reaction was actually to submit a point of order to the Knesset plenum. It was not a reaction for the media. The ones who instantly reacted and backed the officer were Knesset members and ministers. What I wanted was to highlight the hair-trigger approach in the territories and the many fatalities at the checkpoints. Even if his jeep was pelted with stones, who says he has the right to kill? Was that some kind of kangaroo court, or what? All the witnesses say that when the brigade commander fired at the youth, he was not in a life-threatening situation. Besides, all this took place in an area occupied by Israel, and I think that people under occupation have the right to resist. What I’m doing right now is not encouraging Palestinians to throw stones, but I do support their resistance. To illustrate my point, in developed countries, there are cases in which demonstrators throw stones and firebombs at policemen, yet they don’t react with live fire.

Al-Monitor:  It was just a few months ago that the Joint List was established when the Arab factions had to unite because of the higher voting threshold. In the test of reality, do you consider this unification to be a success story?

Ghattas:  This has exceeded our expectations. We’re learning to work together, overcome differences and conduct a serious dialogue. We’re a relatively large faction, and it’s evident in our representation in the Knesset committees and our visibility in the Knesset. This is a source of power, especially when there’s a narrow coalition of 61 members and every vote counts. The Joint List is a big success, and I think it would be political suicide for anyone to walk out on it. By the next elections, we will have 15-16 seats.