With a new geopolitical setup in the Middle East and the regional focus on Syria rather than on Gaza, the Marianne flotilla was intercepted by the Israeli navy without "significant media coverage" for this protest. 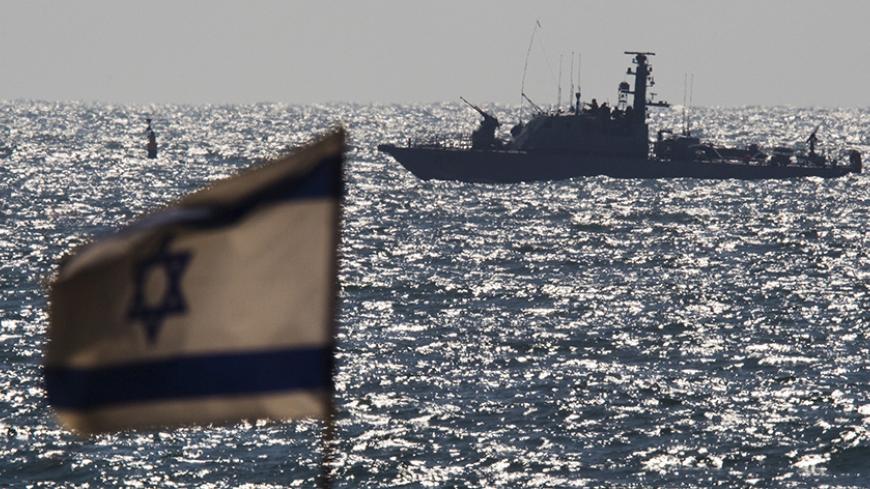 An Israeli naval vessel is seen in the Mediterranean sea outside the port of Ashdod, Israel, June 29, 2015. Israel said on Monday it had blocked a boat leading a four-vessel protest flotilla of foreign activists from reaching the Gaza Strip and forced the vessel to sail to the Israeli port. - REUTERS/Amir Cohen

Five years and a month separate the naval flotilla to Gaza that centered around the Mavi Marmara and the current four-boat flotilla led by the Marianne. In May 2010, one flotilla participant was Israeli-Arab Knesset member Haneen Zoabi of the National Democratic Assembly Party, or Balad; this time, Israeli-Arab Knesset member Basel Ghattas, also of Balad, was on board the Marianne. But this is about the only similarity between the former event — which turned into a blood-drenched trauma with consequences that echoed across the region for years — and the current incident, which barely made the news or garnered any real attention. And this time, the boats that had been accompanying the flotilla flagship had turned around and were not intercepted by Israel.

The Marmara headed a flotilla consisting of six ships (out of nine that were supposed to participate), with hundreds of activists on board. Many of those activists were from the Turkish IHH Humanitarian Relief Organization. Some were armed with iron bars and knives, and apparently with guns as well. Turkey threw all its power behind the flotilla, and the spirit of that country’s all-powerful then-Prime Minister Recep Tayyip Erdogan hovered over everything.

This time, however, Turkey isn’t a player. The trawler Marianne is flying a Swedish flag, and there were just 18 unarmed individuals on board, including an Israeli journalist (Ohad Chemo from Channel 2) and Ghattas. The former president of Tunisia, Moncef Marzouki, was also there as a kind of diplomatic bargaining chip, to ensure that Israel did not exert excessive force.

The Israeli navy seized the Mavi Marmara the night of May 30-31, 2010. The navy seized the Marianne the night of June 28-29. During the Marmara incident, 10 participants in the flotilla were killed and 30 were injured. Ten Israeli naval commandos who rappelled down to the ship from low-flying helicopters suffered injuries, two of them serious. Seconds after the Israeli commandos boarded the ship, they were surrounded by an angry mob, and the incident turned into a violent scuffle.

According to some witnesses, one of the passengers pulled out a pistol and used it. It took just a few seconds before the Israeli forces realized that they could not seize control of the ship using textbook tactics. In fact, they were fighting for their lives. They pulled out their guns and the rest is history. Relations between Turkey and Israel suffered the worst blow in their entire history, crashing to a complete halt. There was considerable criticism in Israel over the fact that both the Israel Defense Forces (IDF) and the political leadership failed to prepare adequately for the flotilla. They underestimated the risks and left the naval commandos unprepared for what they encountered.

What changed between the incident with the Marmara and the Marianne? Quite a bit. First, there’s Turkey. At the time, Israel’s relations with Turkey had been deteriorating steadily. Erdogan's hatred for Israel had become one of the major engines of his political growth. He declared himself an ally of Hamas in Gaza and swore to break through the siege on the Gaza Strip. Turkey initiated, deployed and fueled the Marmara, with Erdogan later threatening that the next flotilla would reach Gaza accompanied by the Turkish navy.

The situation is entirely different today. Erdogan is not as omnipotent as he used to be. “He took a hit, and he recognized the limitations of power,” I was told by a senior diplomatic source in Jerusalem this week who spoke on condition of anonymity.

One week before the Marianne reached Gaza’s territorial waters, on June 22, the director general of Israel’s Foreign Ministry, Dore Gold, who is close to Prime Minister Benjamin Netanyahu, met secretly in Rome with his Turkish counterpart Feridun Sinirioglu, the undersecretary of the Turkish Foreign Ministry. The meeting, which was leaked to Israeli TV Channel 10 and the daily Haaretz, took place after a long period in which there had been no contacts between the two countries. One source familiar with the details of that meeting told Al-Monitor on condition of anonymity, “The Turks realize that the situation in the region has changed. Israel is no longer one of their priorities. They have plenty of other problems now. They are dealing with events in Syria and Lebanon, and they are doing what they can to keep the fire from spreading into Turkey. It isn’t easy.”

In that sense, Israel and Turkey find themselves in the same boat, with the only difference being that this time the so-called policy boat isn’t sailing to Gaza. For one thing, Israel is also trying to keep events in Syria and Lebanon from crossing into its own territory. Israel has an important Druze minority; many serve in the IDF, playing a major role in Israel's protection. The Israeli Druze community is deeply concerned about what is happening to the Druze minority in Syria and Lebanon. Turkey has a similar situation with its Shiite minority, which is living and breathing the horrors threatening its brothers and sisters in Syria. “Many factors, including Iran, are stirring the pot, with regard to what is happening to the Shiites in Syria and Turkey,” one Israeli diplomatic sources familiar with the details of the meeting in Rome told Al-Monitor on condition of anonymity. “The Turks are very worried about this. It is now their top priority.”

While both capitals deny that the long-awaited reconciliation is right around the corner, they admitted to have re-established contact. Though the Turks continue to demand the lifting of the siege on Gaza, this demand lacks the enthusiasm it once had. The reason for this is that something else happened between 2010 (when the Marmara incident occurred) and 2015. The Arab Spring erupted in Tunisia in December 2010, changing the region beyond recognition. This enormous shakeup crossed borders peoples, and communities to become the main focus of attention and energy of all the various parties involved.

All these circumstances came together so that when the Marianne tried to make its way to Gaza, the Israeli navy was able to block it easily, efficiently, without excessive international involvement or significant media coverage. Today, Israel is practically the only source pouring goods and services into Gaza (at the rate of approximately 800 trucks per day), contacts between Israel and Hamas are more intense than ever and the reasons for a humanitarian aid flotilla as defined by the 2010 organizers no longer really exist. Furthermore, what is happening in Gaza is apparently no longer of interest to the international media, which is focusing its attention on the real trouble spots of today.

All of the above made it possible for fighters from the navy’s special forces unit Shayetet 13 to board the Marianne on the night of June 28-29, seize control of the boat and tow it back to Ashdod port.

Gold also just returned from a rare June 28 visit to Cairo. There, too, diplomatic relations are thawing out after a long period in which there were no open meetings between the two parties.

On June 4, Gold met in Washington with retired Saudi Gen. Anwar Eshki, a man who is close to Saudi government officials. Neither Gold not Eshki made any effort to hide this meeting, their fifth. The Saudi general even said before Israeli news cameras that they were part of a forum established to relay messages between the Saudis and Israel, with a focus on the Iranian nuclear threat that both nations face.

Two different periods. Two different ships. There was nothing similar about them. In the new Middle East, Israel finds that it has much more room to maneuver and to cooperate with official Arab sources, mainly due to the simple fact that the regional geopolitical map has changed regarding their interests, and the old threats have been replaced by new ones. In some sense, it really is a whole new Middle East.