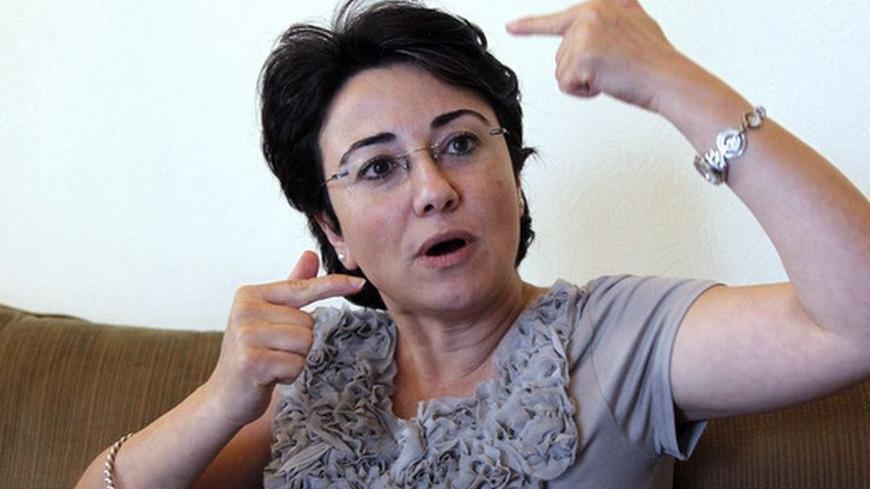 Many Israelis were overjoyed at last week’s [Dec. 19] decision of the Central Elections Committee that disqualified Member Knesset Haneen Zoabi’s candidacy for the upcoming Knesset. Others squirmed uncomfortably in their seats but apparently they, too, were not really sorry. What is it about that Balad Israeli-Arab political party Knesset Member that arouses such great antagonism among the Israeli public, and not only from the Right? Why do so many people in Israel love to hate her?

“The problem is not that I am a terrorist,” said Zoabi after her disqualification. “Maybe the problem is that I am too democratic. The problem with the Balad movement and the Arab Knesset members is that we are democratic in an atmosphere that does not believe in democracy.”

Throughout her political career, Knesset Member Zoabi has not only enraged such Knesset Members as Anastasia Michaeli, who almost physically attacked Zoabi from the Knesset’s rostrum, or Miri Regev, who called her derogatory nicknames that are not fit to be printed. Zoabi has also stirred up anger among people who regard democracy as their guiding principle in life.

The clear and immediate reason for this is Zoabi’s participation in the Mavi Marmara of the IHH, an Islamic Turkish NGO, that began as a humanitarian-assistance flotilla to Gaza and became a violent, provocative and bloody journey in 2010. Zoabi was viewed as someone who collaborated with Israel’s enemies and this, to the Israeli public, is an inexcusable mark of disgrace.

Think about it: an Israeli Arab resident of Nazareth, daughter to a family whose relatives were supporters of the left-wing Israeli political parties Mapam and Mapai, sitting on a boat of the World Jihad movement whose operatives are hitting and abducting IDF Shayetet soldiers, an elite naval commando unit], operatives who try to take control of the ship. And Zoabi watches them from the sidelines without trying to intervene.

What more do we need, say her battery of opponents, in order to stone her, to tar and feather her, or at least kick her out of the Israeli Parliament?

This is the opportunity to introduce my personal point of view on the Marmara affair. A short time before the boat sailed off from Turkey in May 2010, I, an Israeli journalist, received an invitation to join the flotilla. Together with other journalists, I was supposed to add a flavor of international media coverage to the expedition; the news network I worked for also thought that news coverage of the trip would have great journalistic value. However, I had a bad feeling that the whole trip would not end well, so I turned down the offer. I smelled trouble. I did not want to find myself in a conflict between being a journalist and being an Israeli. Nevertheless, I am almost sure that if I would have found myself on the deck of the Marmara, witness to a situation in which one soldier was being pummeled with clubs and a second one thrown off the deck, I would know what course of action to choose.

Zoabi also knew what to choose. I assume that the militant activists who joined the ship and secretly prepared weapons — knives, swords, chains and other such tools — did not show them to her. I also want to believe that if she could have averted the harm to the Shayetet soldiers who were beaten and wounded on the violent struggle on the deck, she would have done so. But she was there, according to the video clips that were publicized, very close to the activists armed with clubs and spoiling for a fight, and she did nothing to stop it.

The sequence of events is well-known: At the end of the battle on the Marmara, nine people were killed, all Turkish citizens. An additional 20 were wounded in the effort to extricate the soldiers who were abducted and imprisoned by them in the bowels of the ship.

It should be emphasized: The Balad Knesset Member did not look for violence. However, unlike the other Arab Knesset Members who were invited to join the boat and politely refused, each for his own reasons, Zoabi looked for provocation. And she certainly found it.

I want to argue that even if Zoabi had not stood on the Marmara deck, the Balad Knesset Member would still be a leading candidate for the title of “enemy of the public.” Some of it is connected to the hard-to-digest mixture that she represents to a large portion of the Jewish-Israeli public: woman-Palestinian-feminist, strong-minded and belligerent and so forth. But part is also connected to the path she chose for herself — the path of provocation.

Anyone who tracked Zoabi’s statements during her Knesset tenure, may well reach the conclusion that her only mission as Knesset member (in the Israeli Knesset, lest we forget) is to deepen the hatred between Arabs and Jews. Let us also remember that Zoabi was the protégée of former Knesset Member Azmi Bishara, founder of Balad, who fled in 2007 from Israel because he feared being indicted for giving assistance to Hezbollah.

It seems that Zoabi has raised the hatred-motif between Arabs and Jews to an art-form, to the extent that she started to enjoy the spectacle of herself. She said things to irritate and anger others, she enjoyed angering them, to hate and make others hate. She did not understand that she was using a two-edged sword — that she not only caused people to hate only her. Many Jews viewed her, unjustifiably, as representative of the entire Arab public in Israel. This caused the deepening of the already-deep gap between the two populations.

Zoabi’s expressions and statements stopped being the gimmick of a politician attempting to justify her existence and arouse attention. Instead, they became dangerous, destructive acts against the very delicate texture of Jewish-Arab relations.

True, there are those who will argue that all the governments of the State of Israel did everything they could to discriminate against Israeli-Arabs. No one disputes this. But instead of fighting the unjust discrimination faced by Israeli Arabs outside the Knesset and inside it, instead of taking advantage of the democracy she is part of to right the wrongs — Zoabi rather exploited the Israeli democracy to defy the foundations on which the State of Israel was built, the country that is her country as well.

Do you want an example? In the foreword to British author Ben White’s book, Palestinians in Israel: Segregation, Discrimination and Democracy, Zoabi writes the following: “Following 50 years of political experiments, Israel's Arabs have grasped the power inherent in democracy and aim to undermine the moral and political legitimacy of the Zionist enterprise, reducing it to the status of a colonialist and racist project.” In other words, as a citizen elected by the Arab public to be its representative, Zoabi comes to destroy and not to build.

Another example? In the protest march in Hebron and Jerusalem in March 2010, as part of the events organized by the High Follow-Up Committee for Arab Citizens of Israel under the banner of “Day of anger against the occupation and Israel’s Judaization policy,” Zoabi identified Israeli policy with “ethnic cleansing” and afterwards called on the Palestinians to begin a third Intifada.

In doing so, Zoabi crossed all the red lines. This is incitement. Imagine if a right-wing Knesset member called on the Jews to carry out an Intifada against the Arabs.

So what is the difference between Knesset Member Haneen Zoabi and Israeli-Arab Knesset Member Ahmad Tibi? There are those who argue that Tibi is also not worthy of sitting in the Israeli Knesset.

It is true that Tibi has angered many people with his efforts over recent years to define himself as advisor to the Palestinian Authority’s chairman, even to fly with Palestinian President Abu Mazen as a member of the Palestinian delegation to the United Nations General Assembly. And this anger has a certain amount of justification.

Think about the following scenario in a different place, a different country, in the cradle of democracy: a member of Congress gives advice to Russian President Vladimir Putin against United States politics or advises Iranian President Mahmoud Ahmadinejad on how to deceive the world in hiding his nuclear project. And imagine an American congressman saying openly that he understands the power concealed in American democracy in order to take action against the American constitution. What would they say about him?

Despite all the above, Ahmad Tibi — in contrast to Zoabi — does not attempt to exploit the Israeli democracy that allows him to sit in the Knesset, in order to destroy it. Tibi (even when he fumes against defense correspondent Roni Daniel’s style) does not forget for a minute that despite it all, he is Israeli. An Arab Knesset Member, a discriminated-against minority member, but an Israeli nonetheless.

Tibi, again, in contrast to Zoabi, clearly knows where the lines are drawn separating criticism from incitement, between things that may be said — flagrant and harsh as they may be — from words and expressions that might depict him as a fifth column. Therefore, even right-wing Knesset members did not place the political gallows before Ahmad Tibi, as they did to Zoabi.

It is possible that the High Court of Justice may invalidate Zoabi’s disqualification, thus allowing Zoabi to be a candidate for the 19th Knesset. But the ones who will have to judge her — her acts, but her words even more — are the Israeli Arabs. They will have to ask themselves: Has the Balad Knesset Member contributed to improving their circumstances as a minority (an oppressed minority, to a certain extent) in the State of Israel? Has she reduced the discrimination between them and the Jewish public? Or has she, perhaps, deepened the rift and the hatred between the two nations living in Israel?

The most surprising thing is that not only the Jewish public in Israel “loves to hate” Zoabi. It seems that the Arab public is not really in favor of her either. Pay attention: Except for the few obligatory condemnations of Arab Knesset Members, we do not sense any anger among the Arab citizens of Israel in the wake of the disqualification. There are no protest demonstrations, no identification rallies, no one waves a sign saying, “We are all Haneen Zoabi.” It is not as if the Arab public does not know how to organize and protest on the streets when something is really important to it.

In the case of Knesset Member Zoabi, it seems that no one is trying too hard. Because the Israeli-Arabs also understand how great was the damage inflicted by Zoabi on the fabric of the already-fragile relationship between Arabs and Jews in Israel.