Knesset member Haneen Zoabi has decided to continue to focus more on provocation than on action. 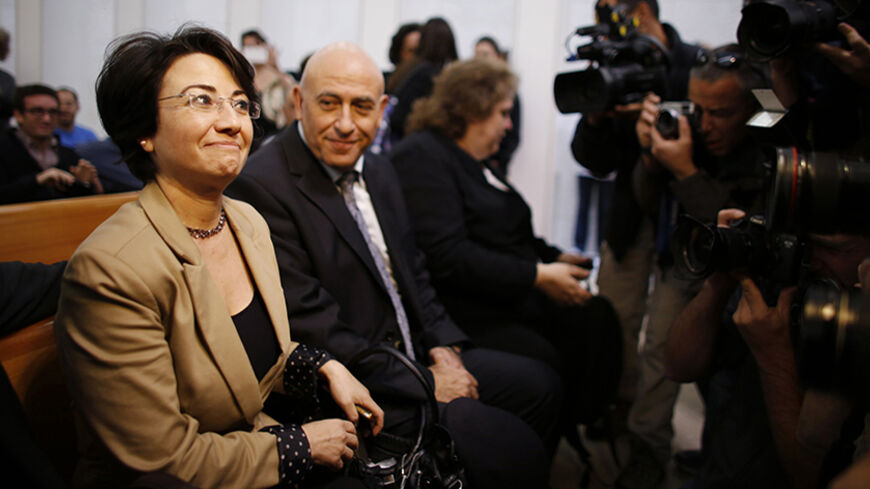 In August 2013, after briefly hesitating, Knesset member Haneen Zoabi announced that she was running to be mayor of Nazareth, the city where she was born and raised. Zoabi estimated that the extensive publicity she received in Israel and around the world over her controversial participation in the Mavi Marmara flotilla to the Gaza Strip in May 2010 would give her an advantage over the other two contestants. Her opponents, Ramez Jeraisi of the Arab party Hadash and Ali Salem, were familiar figures in Nazareth, but they lacked the media attention that Zoabi had received.

Two months later, on Oct. 22, Zoabi crashed in the municipal elections, finishing with less than 10% of the vote. Almost none of the city’s residents bought into her promises for a better future. The result was an enormous humiliation for Zoabi, explained a senior politician in the Nazareth municipality. “She was sure that all the media buzz that surrounded her and the fact that she’d become a kind of 'celebrity' in the Arab sector would take her straight to the mayor’s office,” he said. “It was a false assumption, cut off from reality and somewhat childish. The people of Nazareth simply didn’t think that she was the right person to manage their city. Most of them saw her as a curiosity of sorts.”

Zoabi may take pride in having a master of arts in communications and journalism from the Hebrew University in Jerusalem, but her actual understanding of politics and communications proved to be extremely limited in the last election. The Knesset member from the Arab party Balad fell victim to the illusion of her high media profile. Though she appears relatively frequently in the media, most such appearances can be summed up as a series of provocations relating to the Palestinian struggle. Even among the Israeli Arab community that she represents in the Knesset, she is not identified with any real activity or with social and public legislation.

The senior official in the Nazareth municipality explained why Zoabi had absolutely no chance of being elected: “With all due respect to the Mavi Marmara incident, the people of Nazareth aren’t interested in that. What they are interested in is education, sewage and municipal taxes. They wanted a mayor who can get things done, who would deal with municipal issues instead of prancing around from demonstration to demonstration waving a Palestinian flag or inciting riots at the separation barrier. It had nothing to do with the fact that she’s a woman and that Arab society is a conservative one. Even women here didn’t vote for her. But even if she was a man having the same record of actions, she would not have stood a chance.”

Zoabi was an anonymous Knesset backbencher until the Mavi Marmara incident. Even the fact that she was the first and (thus far) only woman to represent the Balad Party in the Knesset did not help her break into the public’s awareness. It was footage from the flotilla, showing her stirring a commotion and vociferously confronting the Israeli soldiers, that gave her the media exposure she so badly wanted. Zoabi has not been out of the headlines since, and her presence is almost always in the context of her battles with Knesset members from the right. Meanwhile, these Knesset members seem to be competing against each other over who can respond to her the most vehemently. They curse her frequently, calling her a traitor and Hamas activist. They have also called for her to be expelled to Gaza, put on trial and have her citizenship revoked.

Instead of drawing the right conclusions from her defeat in Nazareth and focusing on helping her constituents, when Zoabi returned to the Knesset, she slipped back into the old rubric of rabble-rouser. That’s what happened on June 17, when she created a furor in her latest provocation. In a radio interview, Zoabi said that the abductors of three Israeli boys in the West Bank “aren’t terrorists.” According to her, “They're people who don't see any way to change their reality and they are forced to use these means until Israel will wake up a little, until Israeli citizens and society will wake up and feel the suffering of the other.” Zoabi was asked about her position after a relative posted a video clip in which he attacked the kidnappers and called them terrorists. Zoabi renounced him, saying that he was “stupid and miserable.”

Beyond the dulled senses and lack of sensitivity displayed by Zoabi in response to this human tragedy, she proved yet again that the overwhelming essence of her political experience is populism. She could have delivered the exact same message without striking at the tender underbelly of the Israeli public during one of its most difficult moments in recent times.

It is unfortunate that Knesset members from the right played right along with her provocation by reacting to her with a flood of furious, often crude responses. That is just the scenario that Zoabi wants to provoke when she issues insensitive statements. In her view, this only strengthens the image she has tried to create of herself as a martyr. Even the decision by the Knesset Guard to provide her with security following the threats that she received was exploited by Zoabi for the sake of promoting that same image, when she declared defiantly that she has no interest in security guards.

From one provocation to the next, Knesset member Zoabi has become little more than a curiosity, a populist figure and a shallow politician who is not even appreciated by her fellow Arab Knesset members. As of now, not one of them has stood up in her defense. What made her look the most ridiculous and completely cut off from reality was the June 19 speech by the president of the Palestinian Authority, who sharply and unequivocally renounced the kidnappers in condemning what they had done. Maybe even Mahmoud Abbas isn’t belligerent enough for Zoabi.