The failure of Palestinian leadership in Israel

Once the rising star of Arab politics in Israel, over the past few days Knesset member Ayman Odeh has shown that he lacks real leadership, choosing to follow the voices that call for violence. 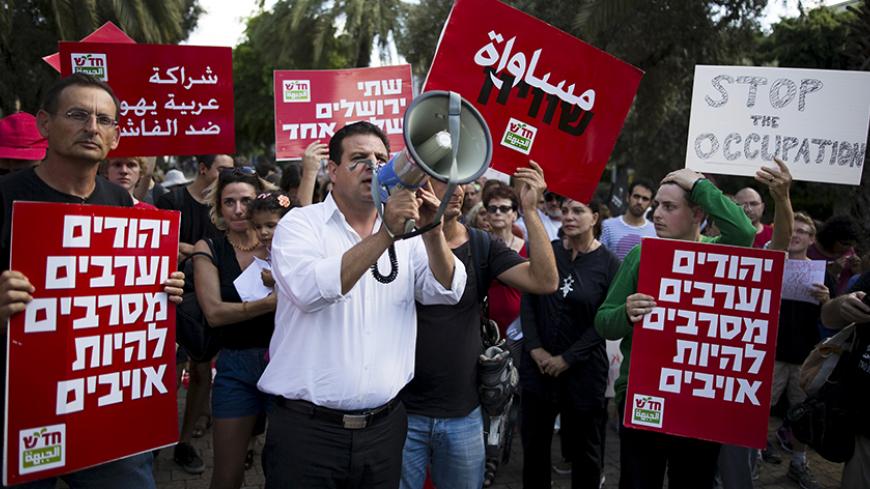 Nazareth Mayor Ali Salam took a bold step in expelling the chairman of the Joint List, Knesset member Ayman Odeh, from his town Oct. 11, even if it caused a ruckus in front of the TV cameras. Palestinian-Israeli journalist Lucy Aharish was no less bold Oct. 14, when she spoke from the heart during a live broadcast, accusing the Arab Knesset members of fanning the flames and calling on them to come to their senses and help restore calm. Both moves attracted the media’s attention and hundreds of thousands of views on social media. Their bold, painful statements showed how weak the Israeli Arab leadership is, particularly those Knesset members from the Joint List.

Aharish, a successful young Muslim woman of 34, is a familiar media figure. She looked outraged when she launched her piercing, agonizing monologue, which was nothing short of an indictment of the Arab Knesset members. “I don’t see the Arab leadership trying to restore quiet. … They are inciting the public even more,” she said on Channel 2. “What kind of God would allow children to kill innocent victims? What kind of woman with a hijab, who prays to God, would pull a knife out of her bag and try to stab people? You’re encouraging thousands of young people to take to the streets. With your own hands, you’re ruining their future. These children are paying with their lives, with their blood, because of your incitement.”

Salam is a popular, well-respected mayor who spends his days managing Israel’s largest Arab city. As part of his job, he is intimately familiar with the crises facing the Israeli Arab sector and knows exactly what it needs. In the 2013 municipal elections, he easily defeated Knesset member Haneen Zoabi for the post. Zoabi believed that since she was a well-known figure and the "star of the Gaza flotilla,” she would win handily. But even the young people weren’t very excited by her candidacy, and she suffered a humiliating defeat with barely 10% of the vote. The elections in Nazareth showed the real priorities of the local population.

Ever since the recent wave of violence erupted, Salam has been wandering about his city, anxious and worried about its economic well being, which relies on the delicate relationship between Jews and Arabs in their day-to-day lives. He watched sadly at the end of last week as commerce in his bustling city ground to a halt. Jews stopped coming to visit out of fear of the recent wave of knife attacks. When he saw Odeh being interviewed in Nazareth after participating in a particularly turbulent demonstration that left tires and trash bins torched, Salam decided he could take it no longer. Standing in front of the TV cameras, he shouted at Odeh, “Get out of here!”

Beyond the bold scolding itself, what stood out about what Salam did was the way he spoke to the leader of the Joint List. He reproached him without the slightest hint of admiration. His comments exposed the fact that while Odeh may hold a senior position in politics, he lacks any real authority.

Odeh may have emerged as a media darling over the past year, but it was Salam who stood out as a leader at this critical moment, plotting a new path forward rather than being caught up by the populist tone or the escalation of violence. The same cannot be said about Odeh or any other Knesset members from the Joint List. The impression they give is that they are being dragged along by an agenda that they think will give them media prominence and public support, on a path laid by the well-known provocateurs, Zoabi and her fellow Knesset member Jamal Zahalka.

It seemed only natural that people would look to the great promise of Arab politics in Israel, Odeh, to offer them hope. In the last elections, he succeeded in winning popularity even among the Jewish population. In the many interviews he gave at the time, he compared himself to none other than Martin Luther King Jr. In an April 24 interview with Channel 2, he made an inspirational statement: “I have a dream of achieving equality in this country. Without one-third of the Jewish population supporting this, and another third maybe not supporting it but ready to listen at least, we will not achieve equality. Just as the Jews in the United States supported King’s struggle, I am confident that hundreds of thousands of Jews here will support our struggle for equality."

But over the past few days, Odeh has turned out to be a major disappointment. Instead of leading, he is being led. All that is left of his ambitious agenda for a civilian revolution is a ghost of a figure. If he really were the inspiring leader that he claims to be, Odeh would set his own agenda instead of being little more than an apprentice for Sheikh Raed Salah, the leader of the northern branch of the Islamic Movement. Odeh could have reached out to the younger generation and become a symbol of the values of equality and tolerance he preaches, but instead he succumbed to populist political pressures.

How much of a disappointment he is can be seen in an interview he gave to Channel 2 on Oct. 12, after yet another day of stabbings and bloodshed. When asked why he is doing nothing to stop the violence, Odeh responded that he can’t sit in his nice home and tell the Palestinian people how to act. “I think that my people will choose how to wage this struggle,” he said, essentially admitting that he was being led along. In these dark days, as elected representatives of their sector, the members of the Joint List should have been lighting the way.

It is sad that there is no bold leadership to blaze a way forward on either the Palestinian or the Israeli side. It looks like Palestinian President Mahmoud Abbas has already lost touch with his constituency, so it is no longer clear whom he really represents. His Oct. 14 speech was incendiary and inflammatory.

Israeli Prime Minister Benjamin Netanyahu has also been dragged along by recent events. He was late in stopping the extreme right from engaging in its provocative behavior on the Temple Mount. Then, for political reasons, he got involved in a war of accusations with Abbas and the Arab Knesset members.

When there are no leaders to show a path forward, sane voices like Ali Salam and Lucy Aharish stand out, offering inspiration and hope.