Israel divided over wave of violence

While Prime Minister Benjamin Netanyahu tries to restrain his government, tension rises within the Palestinian sector in Israel. 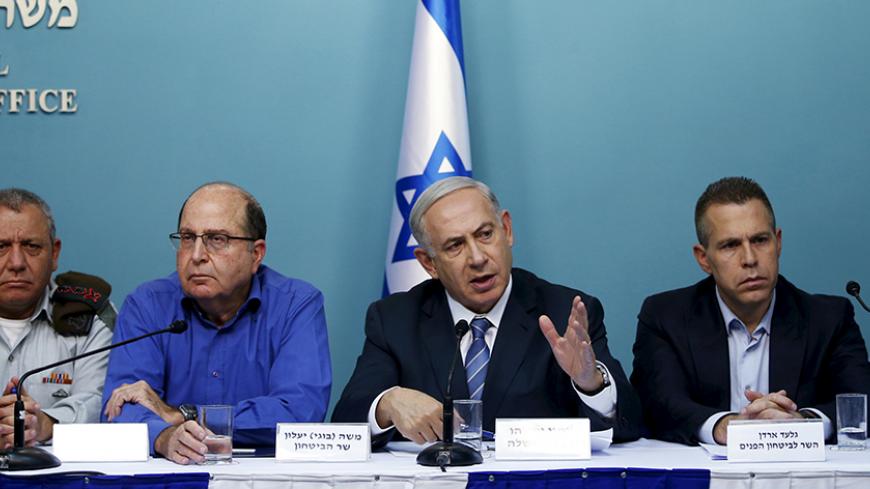 Prime Minister Benjamin Netanyahu always tries to grab the stick by both ends. He talks peace while simultaneously hindering diplomatic negotiations. He dances to the right while turning his gaze to the left. He delivers his “Two-State Solution Speech” while accelerating construction in the settlements.

There are, however, those rare instances when Netanyahu is caught in the corner on the right or the left, with no room to maneuver. That is exactly the situation he is facing now. The Israeli right is hounding him with its demands for more construction in the settlements, but Netanyahu, backed by Defense Minister Moshe Ya’alon, adamantly refuses to concede to their demands. The right is insisting that Jews be allowed to go up to the Temple Mount, while Netanyahu tries to restore calm by keeping ministers and Knesset members away from that volatile site. Then, when there is an uproar, the prime minister announces that his new orders cover Arab Knesset members, too.

In an effort to justify his position, on Oct. 3 Netanyahu summoned attorney Yitzhak Molcho to a Cabinet meeting. Molcho is Netanyahu’s special envoy and official negotiator with both the Palestinians and the US administration. He also happens to be Netanyahu’s personal attorney and even a member of the prime minister’s extended family (albeit only a distant relative). Molcho was supposed to provide Netanyahu with cover when facing ministers from the right, particularly HaBayit HaYehudi Ministers Naftali Bennett and Ayelet Shaked, who demand that the government “Build [settlements] now!”

Molcho shared some remarkable stories with the Cabinet. “[US Secretary of State] John Kerry has been looking for me. He’s been leaving me messages on my cellphone,” Molcho told them. “He informed me that if we announce more construction now, the US would be unable to veto the French proposal regarding the settlements, which will soon be brought before the Security Council,” and added, “That would be a catastrophe.” The ministers bombarded him with questions, and he responded in kind. The scenario that he laid out before the Cabinet was nothing short of apocalyptic. With the meeting focused on the issue, Netanyahu got him to say much more. Whenever a volatile topic came up, he turned to Molcho. When ministers spoke about the need to build more in Jerusalem, the prime minister asked Molcho, “What do you have to say about Jerusalem, Itzik?” at which point Itzik (the diminutive form of Yitzhak in Israeli Hebrew) said, “Jerusalem is the most volatile issue of all. It is the most critical issue for the Americans. Any talk about Jerusalem would cause terrible damage.”

Netanyahu lacks the necessary fortitude to act decisively and back up what he decides on his own. His government has just 61 Knesset members (out of 120 Knesset seats), meaning that any defection would put his survival as ruler at risk. That is why he keeps trying to find a scapegoat. In this case, it is the Americans. He wasn’t bothered by the US State Department’s official denial Oct. 7, when the department said that there was “no [American] ultimatum” concerning construction in the territories. At least two Cabinet members told Al-Monitor on condition of anonymity, “We know Netanyahu’s information is correct.” I then asked them if Molcho happened to play Kerry’s voice mail to them. Obviously, they denied it.

When faced with security crises like this, Netanyahu is a master of restraint. He is sickened by the very possibility of a third intifada erupting during his term. At this stage, he is succeeding where former Prime Minister Ehud Barak failed in 2000, when the second intifada erupted. When gauged in terms of bloodshed, the current situation is still preferable. Security collaboration between the Israel Defense Forces (IDF), the Shin Bet and the Palestinian security forces continues. Fatah’s Tanzim group, which is the most heavily armed Palestinian force in Judea and Samaria, is still staying out of the conflict, at least for now.

A series of particularly serious incidents took place over the past few days along the Gaza fence. These were the terrifying fulfillment of Israel’s worst scenarios, though so far, the IDF has managed to suppress them. Still, the sight of tens of thousands of unarmed Palestinians marching toward the border fence is the cause of many a nightmare for the Israeli leadership. That is why at least six Gaza demonstrators were killed Oct. 10, just before they were able to destroy the fence and break into Kibbutz Nahal Oz. As of now, a tense silence pervades the Gaza Strip. Meanwhile, Israel has deployed an “Iron Dome” air-defense battery in the south. It expects a response to the casualties to come in the form of rockets any moment now.

A positive turning point occurred Oct. 6 when the chief of Israel’s Central Command met with the heads of Palestinian President Mahmoud Abbas’ security forces. This meeting was made possible after the Palestinian leader came to his senses and realized that the tiger he was riding on could turn over and tear him apart too, just as it did to late PLO leader Yasser Arafat in 2000. The Oct. 6 meeting was good. The IDF and the Shin Bet concur that the Palestinian security forces are continuing their war against terrorism and making every effort to restore calm. The problem is that their abilities are limited. The Palestinian public supports the young assailants wholeheartedly when they attack Israelis with knives, screwdrivers, vegetable peelers and whatever else they happen to find. There was even an incident near the West Bank town of Jenin in which a young Palestinian tried to throw a poisonous snake at a group of Israelis.

The Israeli defense establishment is still trying to understand this phenomenon, for which there is no operational response for the moment. These young Palestinians are not members of some terrorist organization; they lack an infrastructure, and they have no bombmakers. They receive their orders from no one. They are simply exposed to intense brainwashing online until a critical mass is reached. Then they set off to attack the first Israeli they meet. The security forces are talking about the “Islamic State effect.” It is the incarnation of the Arab Spring in Israel. A generation of Facebook youth is being sucked up by the romantic image of IS. Facing a dim future, they are looking for action, and they seem to have found it. How could anyone fight that?

At this point, the main Israeli response focuses on efforts to minimize damages and reduce the number of fronts. The north is calm, at least for now. Hezbollah’s Secretary-General Hassan Nasrallah is very busy in Lebanon and Syria, as we all know. This means that the most sensitive front is the Israeli Arab population.

On the evening of Oct. 11, an Israeli Arab from Umm al-Fahm drove his car into Israeli civilians near a shopping mall in the north. One female soldier suffered serious injuries, and another male soldier sustained light injuries. The assailant then stabbed two more civilians before he was finally neutralized. Two days earlier, in the northern town of Afula, a young Arab Israeli female student attacked passersby with a knife until she was finally shot by a policeman. A video clip of the incident appeared online within seconds, causing an enormous commotion. It showed a young Arab woman standing there with a knife in her hand, surrounded by eight armed Israeli police officers, until she was finally shot in her lower extremities. The injury she sustained is not life-threatening. Nevertheless, the Arab population claims that she could have been stopped without firing at her. The Israeli public, on the other hand, claims that anyone who attacks civilians with a knife deserves to die.

The police were also facing a conundrum. There have been cases in which they showed compassion for young people like that, only to get stabbed in the heart or the gut. The finger on the trigger is light, and it is trembling. Their nerves are frazzled. The police can’t afford to turn their backs on anyone. In situations like that, the unexpected can happen.

One seminal incident occurred on the evening of Oct. 11 in the Israeli-Arab town of Nazareth. Knesset member Ayman Odeh, head of the Joint List, was being interviewed for Channel 2 News. Suddenly, a white car pulled up beside him and the driver started shouting, “Take care of your business somewhere else, Ayman! You destroyed our town. Get out of here! Enough with all the interviews. Find something to do somewhere else. Go back to Haifa!” Odeh was shocked. So was the television crew, especially once they realized that the heckler was none other than Nazareth Mayor Ali Salam. He was furious about all the damage caused to his city because of the recent riots.

Nazareth is a tourist city. Its economy relies on the throngs of Israelis who visit on the weekend. Arab Knesset members have been exploiting the outburst of Palestinian rage over the past few days to encourage the Israeli Arab population to join the fracas. The Jewish population responded immediately by avoiding Arab towns and boycotting Arab businesses.

The live broadcast of this barbed verbal sparring between an Arab Israeli member of Knesset and the mayor of an Arab Israeli town was one of the most formative civilian recordings of events seen on television recently. It testified to the huge rift among the Arab Israeli population and the dilemma that they face. “Enough of that! Get out of here!” the mayor hollered to the stunned Knesset member. “You destroyed this city. I’m the mayor here. … There wasn’t a single Jew here today. Not one! What are you being interviewed about? What are you doing to us? You organized a procession [to demonstrate] and set the world on fire! Shut up! Get out of here!”