The removal of Knesset member Haneen Zoabi, known for her provocative anti-Israeli stance, may make it easier for Israelis to vote for the new joint Arab party. 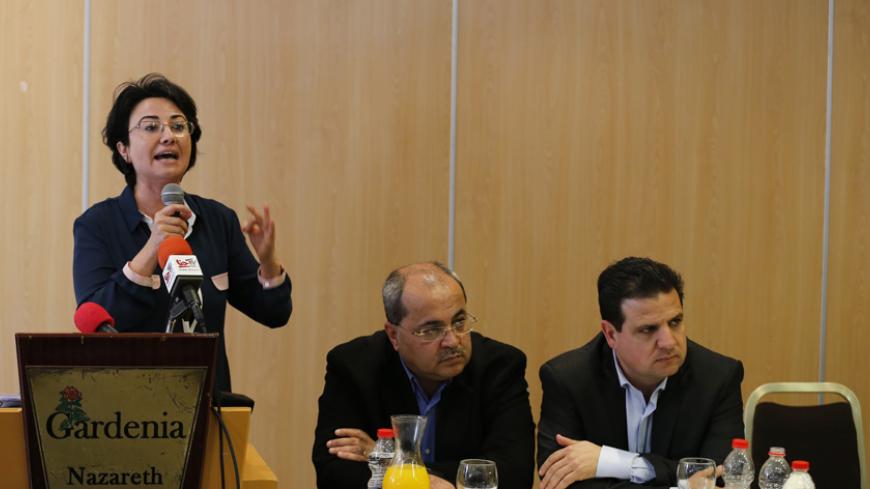 Israeli-Arab lawmaker Haneen Zoabi speaks at a news conference in Nazareth, announcing a joint political slate of all the Arab parties which will be running in the upcoming elections, Jan. 23, 2015. - REUTERS/Ammar Awad

Elections Committee members for the 20th Knesset disqualified the candidacy of Knesset member Haneen Zoabi, who's ranked seventh on the joint Arab slate. Yariv Levin, the Knesset Foreign Affairs and Defense Committee chairman who was one of the petitioners against her candidacy, said during the deliberations that Zoabi’s activity is focused on supporting terrorism and repudiating Israel’s existence as a Jewish democratic state.

“Those seeking to disqualify me are the ones who should be standing before us and held accountable for what has been done to my people and to other peoples,” she replied to the allegations leveled against her.

Her disqualification on Feb. 12 will soon be brought before the High Court of Justice, as was the case during the previous elections in December 2012. Back then, Zoabi was disqualified on similar charges of incitement and undermining the state. However, the Supreme Court overturned the disqualification, allowing her to run on Balad’s slate.

What plays in Zoabi’s favor now is the opinion of Attorney General Yehuda Weinstein, who believes that there is not enough substantive evidence to support the charges cited in the petition, including her alleged support of an armed struggle by terrorist organizations and repudiation of the State of Israel’s characteristics as a Jewish and democratic state.

Unlike the previous elections, Zoabi is not running on the Balad slate alone. Rather, she's featured in a joint Arab party that tenuously connects four Arab parties that espouse different concepts, platforms and worldviews. It is a known fact that the leaders of the Arab parties Hadash, Balad, Ta’al and Ra’am — as well as their activists, supporters and senior and junior members — were forced to blur their huge differences and to conceal and downplay their disputes only to overcome the hurdle of the voting threshold that imperils their political survival.

But if the unification is something they believe to have been inescapable, it's Zoabi’s presence, however, that many of them are struggling with. It seems that many Arab Israeli voters who are neither members nor supporters of Balad see her as an electoral liability. The Hadash movement — Balad’s traditional adversary — views Zoabi as a bona fide obstacle jeopardizing coexistence and the desire of the young and middle generations of Arab Israelis to be integrated into Israeli society.

An editor of one of the Arab Israeli newspapers, who spoke on condition of anonymity, described to Al-Monitor his feelings following the news of her disqualification: “The forced unification with Balad left Hadash with a very bitter taste, primarily because of Haneen. The acrimonious and antagonistic atmosphere she is espousing is intolerable. She is causing us immense damage. These young men and women look at her with cynicism, stupefaction but mainly with great contempt.”

The editor added that if the Supreme Court endorses her disqualification, voters who were quite indifferent about the joint slate, and some who would not even consider voting, might go happily to the ballot box and might even rally on behalf of the slate as activists on the ground. In his opinion, a slate without Zoabi will get many Jewish votes and much more so from Arab voters. “Young people want Haneen to leave them be and let us live peacefully with the Jews and rebuild the bridge she has managed to destroy.” He said these impressions reflect an ever-growing opinion among many young people in the Arab-Israeli sector.

In recent years, Zoabi has become a red flag in the eyes of many Israelis. During last summer’s Operation Protective Edge, Zoabi advised Palestinians on her Facebook page to declare a popular resistance instead of engaging in security coordination, calling to lay siege on Israel instead of holding negotiations. Furthermore, she argued that the kidnappers and the murderers of the three Israeli yeshiva students — ​Naftali Frenkel, Gilad Shaer and Eyal Yifrah — were not terrorists. Occasionally, she would laud Palestinian resistance (muqawamah). In an interview with Israeli TV Channel 2 in February 2012, she told the interviewer: “There’s nothing good to be said about Israel. An occupying people don’t have the right to a normal life.”

This is just a sample of the statements and actions that turned Israeli-Jewish public opinion against her. But there are also some Arab Israelis who renounce her statements, arguing that she represents neither their opinions nor their sentiments.

It's possible that what Zoabi is saying or writing is legitimate. It's also possible that from a legal standpoint her call for a popular resistance cannot be interpreted as a call for Arab Israelis or the Palestinians in the territories to target Israeli soldiers. It's even possible that her statements do not contain an iota of incitement. But Zoabi does not express her resistance to Israel or her aversion of Israel as an individual, or even as a member of a human rights organization, but as a member of the Knesset. She represents an Arab Israeli public, which for the most part — so it seems — would like to be integrated into Israeli society and does not necessarily concur with the positions she voices.

The overall impression is that her detractors do not dare set out against her or declare that her opinions are not theirs, and what she says does not even represent a small fraction of Arab Israelis. They fear of being perceived as toeing the line with the Israeli right or providing it with a weapon to butt an Arab Israeli woman.

Arab Israelis are torn between their solidarity with the plight of the Palestinians in the West Bank and Gaza Strip and the fact that they are Israeli citizens with unique problems and needs. It's from this place that they perceive Zoabi as someone who's bringing pressure to bear on the entire Israeli society, and that all she does is represent the Arabs in the territories while relinquishing Arab Israelis whom she is supposed to represent.

By the route she has chosen to embrace, her methods, statements and actions, Zoabi has driven a wedge between Jews and Arabs. Many Israelis mistakenly view her as the voice of Arab Israelis. Militant, provocative and radical, she is unable to name even one good thing about the State of Israel. Whether disqualified or not, she has probably already caused immense damage to Arab Israelis.