In an interview with Al-Monitor, Knesset member Esawi Frij says that the strong tribal or family identity of Israeli Arabs will not necessarily encourage them to support the United Arab Party, opening the way to support leftist Meretz. 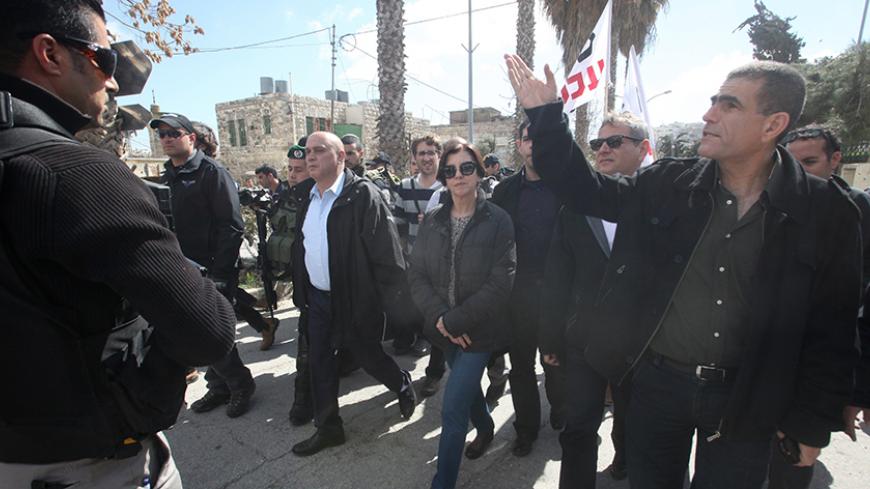 Meretz Party members Nitzan Horowitz (2nd R), Zahava Gal-On (C) and Esawi Frij (C-L) visit Al-Shuhada Street in the West Bank city Hebron in support of Palestinians who were forced out of the old quarter at the outset of the second Palestinian intifada to allow for Jewish settlers to move securely in the area, Feb. 25, 2014. - Getty Images/Hazem Bader

In the March 17 Israeli general elections, the Arab vote may, for the first time ever, have a decisive role in cobbling together the new government. The joint Arab slate, announced on Jan. 23, is expected to garner 11-13 seats, recent polls indicate, thus poised to become the fourth-largest party in the Knesset. No longer are we talking about slivers of parties but rather about a party with clout and influence, provided that its members succeed in remaining united after the elections.

But as reported on Jan. 22, quite a few traditional voters — the hard core of the Arab parties — argue that they will find it hard to vote for a joint slate pieced together from all the Arab parties. They will have a hard time voting for a slate that has no ideological outlook and that blurs the difference between the various streams in the Arab street. They believe this homogeneity to be bogus and contrived and based solely on their being Arabs. Hadash Party voters, for instance, who are basically Marxist Communists, will find it difficult to cast a vote for their opponents from the Islamic Movement or Balad (National Democratic Alliance) Party, whose members are anathema to them.

It is those lost votes that the Meretz Party, which opened its election campaign in the Arab sector in the city of Nazareth in the presence of the party Chairwoman Zahava Gal-On, will try to secure.

In an interview with Al-Monitor, Knesset member Esawi Frij, a Kafr Qasim resident who's ranked third in the party’s slate, opined that Meretz might be able to get one or two seats from the Arab sector, provided it invests smartly in grass-roots activity. "The biggest mistake of Israeli decision makers," he says, "is that they don’t understand something fundamental that typifies Arab Israelis. Most — if not all — of them want to be an integral part of the Israeli experience and feel like full-fledged citizens. The Arab voter is different from the Jewish voter by his national identity but not by his Israeli identity. For all intents and purposes, we are Israelis. And Israeli society should incorporate Arabs as full partners; there’s no other option. It is in the interest of the majority and not just the minority that we make our contribution to society and feel part of it. It is this message that I’m trying to convey and explain, and it attracts both interest and great support."

Al-Monitor: Does the joint Arab slate leave Meretz with any wiggle room in the Arab street?

Frij: That's exactly my point. In my opinion, the joint slate will get fewer votes than forecast. Everyone understands that what binds these people is neither ideology nor any common interest. They can be likened to a bunch of people drowning and trying to get on a raft just to save their own lives, but as soon as they reach safety on shore, they won’t remain as one group. That’s patently obvious, which is why many voters don’t see them as an option. Besides, the loss of competition in the Arab sector will have a very adverse effect on the turnout of voters. Without competition between political parties, opinions, different ideologies and promises, people lose interest. The more competition there is, the more voters there are, and the bigger the interest is. And that’s where we get into the picture. We aim to rally them and convince them to give us their votes. After each parlor meeting I attend, I get three more invitations. Attendees ask questions about the Meretz option and the vision of the movement that is regarded as the champion of civil rights.

Al-Monitor: Do you think that the turnout of Arab Israelis in the upcoming elections will be bigger?

Frij: Not by much. You need to understand the Arab voting pattern. It is still clan-oriented. It still operates and is motivated by interests. Nobody trusts or believes in the Israeli political system — neither in the right-wing parties that hold racist views against Arab Israelis nor in the left and centrist parties.

Al-Monitor: Neither in the Labor Party? They did label themselves as the "Zionist camp," but if they get broad support from the Arab sector, maybe a right-wing government won’t be established.

Frij: The Arabs see the Labor Party as the main culprit that’s responsible for their situation. This is the "original sin," it all started with them. They set the standards of discrimination and Arab Israelis will find it hard to forgive.

Al-Monitor: The way you see it, only you — Meretz — remain as the alternative to the joint Arab slate. In practical terms, what do you do to canvass voters?

Frij: It is clear to all that each vote we canvass could become significant in the struggle between the right and left blocs. We mapped the entire sector. In the communities where there is a candidate for the Arab slate we stand less of a chance to rally voters. The family-clan motif carries us a long way in the voting pattern. So we focus most of our efforts in communities where there is no candidate for the Arab slate. Along the lines of this accurate field mapping, we are obviously looking for those that feel let down and disappointed, namely those who voted in the past for the Arab parties but will not vote for the joint slate. And let me tell you, based on my daily work on the ground I see a lot of people who feel they were let down.

Al-Monitor: What about the two important sectors — the Druze and Bedouins?

Frij: The Druze sector usually tends to vote for the right wing.

Al-Monitor: Despite the discrimination and lack of funds allocated to the Druze sector?

Frij: Generally speaking, the Druze sector prefers to vote for the ruling party. Their loyalty to whoever is in power is their identity card. What I’m sensing from the ground is that they’re inclined to vote for the Zionist camp, because they identify it also to be a ruling party. We don’t put any resources there because we have limited resources, which we prefer to invest in places where we can secure more votes. As for the Bedouin sector, they’re very willing to listen to our ideas given our track record.

Al-Monitor: So what you’re describing is nevertheless some movement in the Arab street to facilitate change.

Frij: Let's put it all in proportion. People won’t come to vote in much larger droves compared to the previous elections. Anger and frustration run high, but with the hard work of activists on the ground we can motivate groups to go to the ballot box and vote for us and for the bloc that will change the face of this country.