Israel Arabs will look to Bibi's actions, not words

Arab Israelis wait for Prime Minister Benjamin Netanyahu to prove his regret over his insulting statement on Election Day, and to allocate the needed resources to improve their situation. 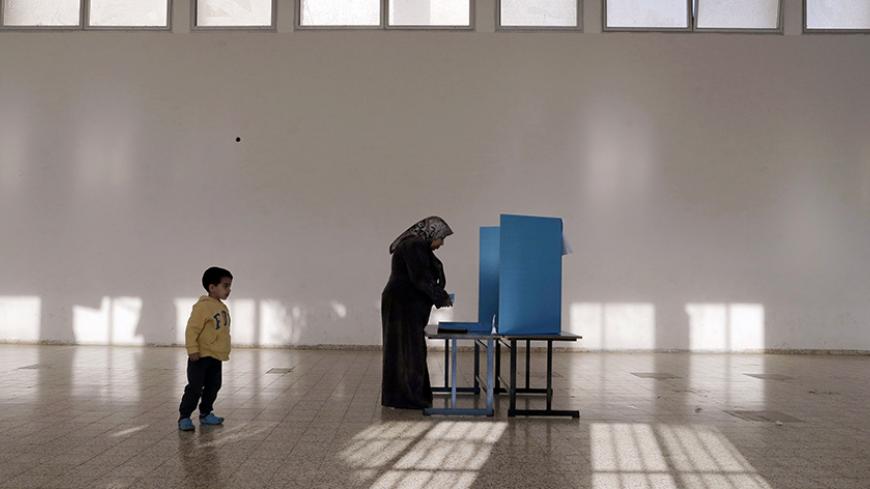 An Arab Israeli stands at a voting booth before casting her ballot at a polling station in the northern town of Umm el-Fahm, March 17, 2015. - REUTERS/Ammar Awad

The recent election campaign left pollsters and many of the country’s political commentators surprised and confused. Despite the forecasts, Prime Minister Benjamin Netanyahu enjoyed a landslide March 17 even in sectors where pollsters and commentators had assumed were “disappointed” with the Likud Party and wanted to punish him. After final results came in, the pollsters who failed to predict the voting trends talked about “undercurrents.” But what seems most surprising is the fact that the Likud Party and Netanyahu received many votes from the Arab sector, too. While Arab Israelis did not vote in great numbers for the Likud, casting their ballots for the Joint List by a large margin, analysis of the data suggests there was almost not a single Arab community where the Likud got zero votes. In many communities, and not just the Druze communities, known to be loyal to the party in power, the percentage of those who voted for the Likud ranged from 3% to 5% of the vote (Muslims, Druze, Bedouins, Christians and Circassians.)

On March 23, Netanyahu invited to his residence in Jerusalem more than 100 Arab council heads as well as activists from the Arab sector to mend fences and explain himself. What the media was mostly focused on was Netanyahu’s first public apology for what he had said at noontime on Election Day, urging Likud supporters to save his candidacy because Arabs were voting “in droves.” The meeting at the prime minister’s residence was also attended by Likud activists in charge of canvassing votes in the Arab sector.

One of the prominent participants at this meeting was Hussein al-Heib, the council head of Tuba-Zangariyye, a Bedouin community of 6,000 in the north of Israel. More than 76% of the voters in his community cast their vote for the Joint List, yet the Likud garnered 62 votes or 3.5% of the voters. Left-wing Meretz only received 17 more votes than the Likud. Incidentally, one other interesting figure is that the two ultra-Orthodox Jewish slates, Shas and Yahadut HaTorah, each got 1% in Tuba-Zangariyye.

“Arab Israelis make up 20% of Israel’s population and they don’t all vote for the Arab parties,” says al-Heib. “Many people follow their personal interests and are not just ideologically motivated. People in the Arab communities that voted for the Zionist parties have relatives or activists who worked to rally voters for them. Here at Tuba, the majority voted for the Joint List, but they also voted for other parties, including not an insignificant number for Likud.”

I asked al-Heib whether Likud activists in the Arab sector did not feel awkward coming to Netanyahu’s residence after his Election Day statement, which was construed as aimed against Arab Israelis.

“Those who were invited showed up,” he said. “[Among them were] the council heads of Beit Jann, Kafr Kanna, Sajur, Kafr Bara, a representative of the Christians, clergy, public officials and Bedouin sheiks from the Negev. Not everybody rooted for the meeting. Arab politicians lambasted us and Netanyahu for it, saying the prime minister had to apologize to them and not to the public officials who were invited to his residence. I told them that I wasn’t the one who organized the meeting. They, as elected public officials, can initiate such a meeting.

“Now it all depends on Netanyahu whether he wants to leave his mark. If he doesn’t — then no one will remember him. We are aware that his next government will be more right-wing oriented. We hope that in the upcoming term — his fourth — he’ll take action to promote all sectors. What we need is a democratic state for all its citizens. There are Arab citizens who were born here. And even though they didn’t serve in the military, they nevertheless built homes and paved roads, and they deserve equality. We have no other country.”

I asked al-Heib how he accounted for the fact that “personal interests,” as he calls it, prompted the Arab population to vote for the Likud, thereby assisting the party to get another seat in the Knesset.

“The Likud,” he replied, “got a few thousand votes, mainly from people who have friends in the party. There were Knesset members like [former Shin Bet director] Avi Dichter who came here to canvass and solicit votes for the Likud. I personally know Netanyahu. During his first term, I sent him an invitation and he came to visit me at my home. Together with my wife and elected Arab officials, I hosted him. There were no elections at the time. It wasn’t a political thing. I sent him an invitation and said: ‘We want equality and budgets,’ and he showed up.”

But in the Arab sector, both sentiments and numbers point to the fact that the much awaited equality has not been established yet, not even on the eve of the elections. The Arab localities suffer from a housing crisis, from lack of urban planning, of infrastructure and much more.

Al-Heib agrees. “I can tell you that most of the Arabs who voted for the Joint List would like it to cooperate with the government, with the Likud, to better the infrastructures and bring them to the same level as the Jewish ones, and to get a set budget for improvements. Let me give the example of the late Prime Minister Yitzhak Rabin who helped Arab Israelis. I can tell you that 60% of the people here voted for him at the time. Even Shas got quite a few votes from us when Aryeh Deri, as minister of the interior, acted for equality between Jews and Arabs. And hence, that’s the conclusion. The vote of Arab Israelis is not only ideologically motivated. It is also motivated by interests, which is what happened now with the Likud. Now the ball is Netanyahu’s court. It all rides on him and the government he will form.”

Many of the mayors in the local Arab councils believe that it was the criticism leveled at Netanyahu for his statement on Election Day that could result in a positive movement in terms of budgeting the Arab local councils and closing the gap and ending disenfranchisement. The people who attended the meeting believe that Netanyahu will try to prove to Arab Israelis, indeed to the world, that he truly regrets what he said and that he will be everybody’s prime minister.

The committee of the heads of Arab localities published an announcement March 25, emphasizing that the participants of the March 23 reconciliation meeting with Netanyahu do not represent them or the entire Arab Israeli sector.