A Muslim woman and a few Druze candidates are competing in the Likud primaries for a minority slot in the party’s next Knesset list. 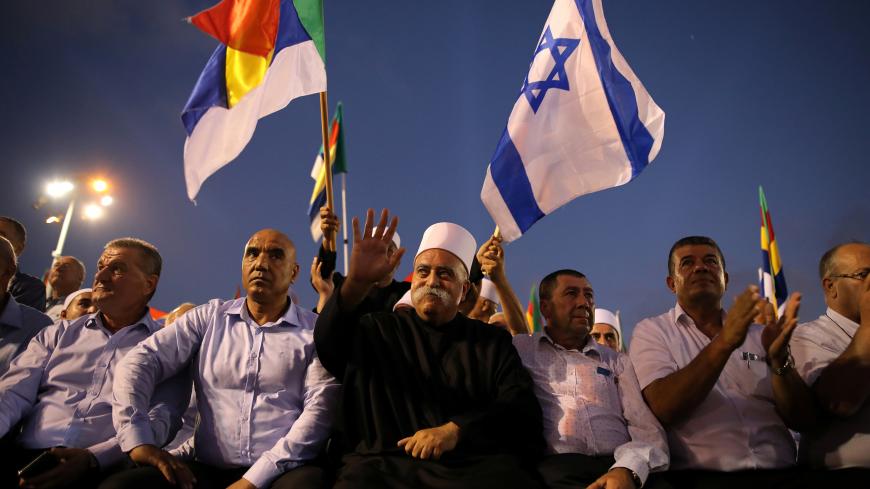 Leaders from the Druze minority group and others take part in a rally to protest the nationality law in Rabin Square in Tel Aviv, Israel, Aug. 4, 2018. - REUTERS/Corinna Kern

One Muslim woman and several Druze candidates are currently fighting over a spot on the Likud slate reserved for minority groups for the next Knesset. But what are they looking for in a movement that promoted the nationality law, which anchored the Jewish nature of the State of Israel?

The female Muslim contender is 25-year-old Dima Tayeh, who was born in the Arab city of Qalansuwa (central Israel) and today lives in Kafr Manda. One might wonder how she can view the Likud as a political home after Prime Minister Benjamin Netanyahu’s infamous statement during the last elections that “Arab voters are coming out in droves to the polls.” This kind of rhetoric doesn’t seem to bother Tayeh, who told Al-Monitor that Ayman Odeh, chairman of the Joint List, made a similar prediction. But Odeh’s December 2018 statement was made in a different context: He was actually mocking Netanyahu’s words. Odeh meant that Arab voters would come out en masse to vote for the Joint List in protest against the nationality law.

According to Tayeh, there are numerous Likud voters in Qalansuwa. She says that more than 120 residents of the town registered for the Likud ahead of the Feb. 5 primaries. In the 2015 elections, the Likud received 42 votes in Qalansuwa.

In reaction to Tayeh’s announcement that she was running in the Likud primaries, Tayeh’s family reportedly issued a sharp rebuke: “Due to her statements, we will not make contact with her or give her any assistance until she retracts her words and declares loyalty to her people and her faith.” However, Tayeh claims that her family members did not write the letter and that a complaint about the matter has been submitted to the police.

Tayeh also says that her husband has been a Likud activist for years and that he gives her a great deal of support. “A lot of Arab citizens called me, they told me, ‘We want you in the Parliament, not like the other Arab [Knesset members] who are always meddling only in the Palestinian issue. They don’t bring anything to [our] sector.’ As an Arab woman running for a place on the Likud list, I don’t want to see Arab MKs who operate against the sector. They call for the destruction of the State of Israel — on what basis do they receive salaries from the parliament?”

Clearly, messages like these are likely to captivate members of Likud’s Central committee, who will vote next month on their list for the next Knesset.

But the Likud's Druze are also competing for the same spot. The Likud held its annual event last weekend in Eilat that is traditionally considered the kickoff of the primaries. In a survey conducted amid the participants, Druze Osama Nevoani from the village of Julis defeated the other non-Jewish candidates by a large margin. He celebrated his victory on Facebook and received congratulations from his friends, but he was criticized, too. “How can you sit and talk to people who treated us with such contempt … and threw us out shamelessly with their racist nationality law?” wrote Ahmed Kezel.

Talking to Al-Monitor, Nevoani says, “People know that the Likud will continue to rule, and if there is to be a correction to the nationality law, it will only come from within. I don’t believe that they will harm our community and I don’t agree that they will damage the close relations that have been nurtured for more than 70 years. What I do believe is that those who are loyal to the state will receive their rights as equals among equals.”

According to Nevoani, “The nationality law didn’t change a thing. We sing [Israel’s national anthem, we swear allegiance to the army and the Israeli flag appears on every home in our community. We have no problem with Israel defining itself as a Jewish state. There was a public relations failure in explaining the law and left-wingers took advantage of the situation as if the law meant [that non-Jews] would be “transferred” [deported from Israel], but that is incorrect.”

He said, “There were many difficulties but once a slot opened up for minority groups, and it turned out that [Druze] Communications Minister Ayoub Kara would not be able to compete for it, our hopes for change grew.”

Salim Brake is a lecturer of political science in Haifa University and in the Open University researching Arab-Israeli politics, mainly among the Druze sector. Talking to Al-Monitor, Brake said that Druze contestants in the Likud do not enter politics to positively influence the circumstances of their own sector and that the Druze support for the Likud is significantly weaker than presented.

According to Brake, based on an in-depth study he conducted, in the 2015 elections, voter turnout among the Druze was 57%, in contrast to the overall rate of 72%, and only 8.8% of them (about 2,600 votes) were for the Likud. One-fourth of the Druze votes went to the Zionist Camp and one fifth to Kulanu. In fact, even Yisrael Beitenu received double the Druze votes for the Likud: about 16%.

Brake considers the Druze politicians self-serving. “My doctorate deals with passive representation, and that is exactly what is happening,” he explains. “These contestants don’t enter politics to change things, but only for their own interests. Representation designed to ensure a career. There are Druze in the Knesset, yet the Druze as a community are not represented.” According to Brake, the Druze community does not feel that their legislators advocate for the issues that concerns it the most. “The Druze view it as a game of musical chairs, and congratulate those who succeed in securing themselves a nice salary,” he says.

Brake also explains that there is a second level of politicians that he nicknames “minister’s advisers.” He says, “At some point there were eight assistants of ministers in the Druze town of Beit Jann alone. You would think that without those Beit Jann advisers, Israeli government members would wake up in the morning not knowing what to do.”

Brake says that he does not believe that it is possible to cancel or amend the nationality law. “The Druze have no influence and no weight in Israeli politics,” he states.

On this background, we cannot ignore the fact that members of minority groups like the Druze are very frustrated that no one is actively promoting their issues in the Knesset. Even Labor, for whom most of the Druze voted (according to Brake), lost Arab legislator Zouheir Bahloul, who resigned from the Knesset feeling that his party did not support his campaign against the nationality law. It now seems likely that the party will remain in the opposition. In this state of affairs, perhaps Nevoani has the right idea: “Let me make changes from the inside,” he repeats. “We have no better way.”