Israeli-Arab bereaved mothers started marching this week from Haifa to Jerusalem, to raise awareness of violence in Arab society. 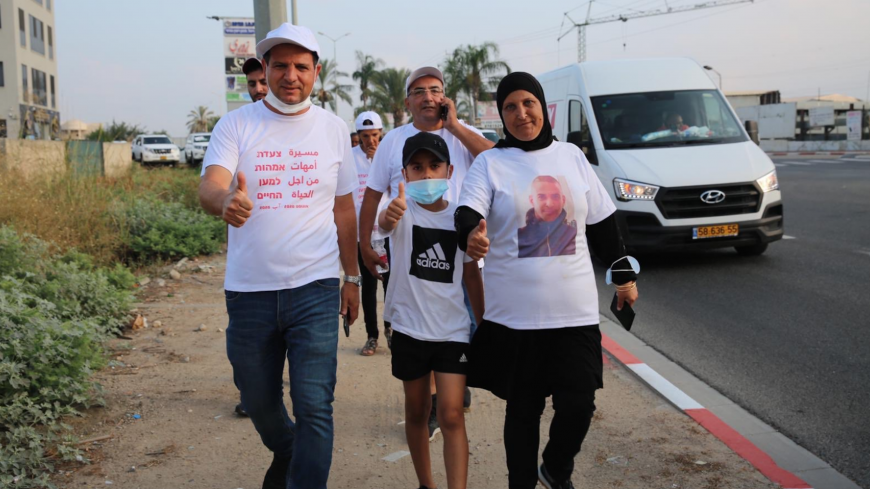 The helicopter disaster on Feb. 4, 1997, left 73 Israeli troops dead. It also led to the creation of Four Mothers, a movement founded by four Israeli women with sons serving in Lebanon, to protest the ongoing Israeli presence in that country and to call for an immediate withdrawal, with or without an agreement with the Lebanese government. It took three years since the movement was founded, but by May 25, 2000, all Israeli troops had returned home, following a decision by then-Prime Minister Ehud Barak.

Just over two decades later, Israel is witnessing the creation of a new protest movement, this one by Arab mothers of victims of the wave of violence and crime that has swept Arab society over the past few years. The purpose of their protests is to raise public awareness of this violence and put the problem on the national agenda, so that it can finally be tackled and resolved.

On Aug. 11, a march by a group of Arab mothers left Haifa’s Halisa neighborhood for President Reuven Rivlin’s residence in Jerusalem. Leading the march is Mona Khalil, whose son Khalil, 28, was killed last June. She is joined by several other mothers whose children were also victims of violence, and by Ayman Odeh, chairman of the Arab Joint List. The group has marched through the Megiddo Intersection, Wadi ‘Ara and the town of Baqa al-Gharbiyye, with the goal of ending their trek outside the president’s residence in Jerusalem. On Aug. 9, the march had about 50 participants; by Aug. 10, there were over 200.

Will these mothers who lost loved ones succeed, where Arab men and Arab political parties failed? Will they succeed in forcing the Israeli authorities to put an end to the wave of violent crime, which has already claimed 46 victims since the start of July? Will they be able to repeat the success of the Four Mothers movement two decades ago, which brought about the withdrawal of the Israel Defense Forces from Lebanon in May 2000?

In a conversation with Al-Monitor, Khalil, organizer of the march, said, “I lost my son Khalil two months ago when he was shot dead in the Halisa neighborhood. That was when I decided to do something that would put the issue of violence on the public agenda. I wanted to wake the police and the local authorities from their lethargy, to get them to move and to compel them to fight the violence that is so prevalent in Arab society.” Explaining how the initiative came about, she noted, “I came up with the idea of the march as something that could evoke interest in the cause. I then approached Knesset member Ayman Odeh about it. He supported the idea from the very beginning and informed me that he would be joining us.”

So far, the participants in the march come from Arab society, though the organizers hope that they will be joined by Jews as well. They believe that this is a problem facing all Israelis, so it should not be framed as an exclusively Arab problem. In fact, they believe that this mindset of considering it an internal problem is what causes the police and local authorities to ignore the situation, even though this only leads to increased violence in Arab towns and villages.

Odeh called on Jews to also take part in the march, explaining that this is how partnerships are built. He told Al-Monitor, “While the coronavirus paralyzed an entire country, the pandemic of crime and violence continues to claim dozens of victims every year. It is not fate. It is the consequence of a police force that considers us to be little more than their backyard. This week that backyard is marching to the capital so that people will look these families in the eye, while we demand our most basic civic right — the right to life and security.”

Reacting specifically to the initiative of the Arab women, Odeh echoed Khalil’s account, saying, “There are no words to describe the willingness to sacrifice shown by these mothers leading the march for the legacy of their children. They are there to prevent the next generation of people from falling victim to this violence.”

There may be another positive point in this initiative: Arab society is known for being very traditional and male dominated. What we are seeing now, however, is a group of Arab women who decided to take command and change the circumstances in which they live, out of a firm belief and realization that they cannot leave their fate in the hands of men — or Arab politicians, for that matter — as they have done in the past. It seems as if even Arab society is beginning to come to terms with the idea that women should also be given a stage. Further evidence of this can be seen in all four of the Arab parties that make up the Joint List. They all include women, including the Islamic Movement, which made history by including Iman Khatib-Yasin on their Knesset list. She is the first Knesset member to wear a hijab.

These mothers, whose children fell victim to the violence prevalent in Arab society, face an enormous challenge as they make their way to Jerusalem. They still have a few days to go. Nevertheless, they committed to their demand for justice, believing that they can prevent the next murder in Arab society. They can keep other women from being forced to join the growing circle of women who have lost their children to violence, and themselves from becoming the latest victims of the violence plaguing their society.

Watfa Jabali from Taibeh, who lost her son Saad in March 2019, summed up the mood for Al-Monitor, saying, “No mother should have to experience what I went through. We demand that the police take responsibility and get the guns off the streets in order to prevent another batch of victims.”