Residents of an Arab town in Israel say they need better police protection after a local businessman was shot to death. 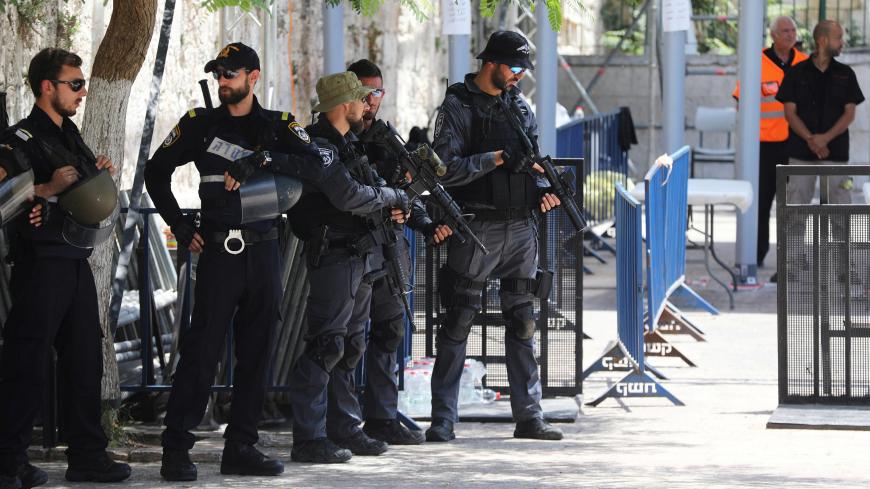 Israeli police officers stand guard next to recently installed metal detectors at an entrance to the compound known to Muslims as Noble Sanctuary and to Jews as Temple Mount in Jerusalem's Old City, July 23, 2017. - REUTERS/Ammar Awad

Since Athamneh’s shooting, residents demonstrated for the third time Aug. 17 in front of a mosque to protest the prevalence of crime in their city. The protesters demanded that the Israeli police do their job: Arrest the perpetrators and fight violence in the Arab community.

The demonstrations are part of a series of activities approved by the city government at its Aug. 17 emergency meeting. During the meeting, attended by community and city committee members, participants declared a general strike on the same day, with all of the city's shops, banks and post offices closing their doors.

After the meeting, the city issued a statement: “The activities to counter the scourge of violence will continue to take place, as several escalatory steps will be taken against criminality and the security services’ failure in our Arab community.”

The measures include holding weekly mass protests in front of the city police station until the perpetrators are identified.

“Policemen are found in the hundreds when razing a house in an Arab town," Barakeh said. “Yet we can’t find them when it comes to a citizen’s life and security. Rather, we find them procrastinating and failing to chase [the perpetrators].”

The victim's brother, Jamil Athamneh, told Al-Monitor his sibling “was a successful businessman and merchant."

"He had lately received death threats from unidentified people, which the police learned about. The threats ended in a hideous crime due to negligence and because no actions were taken,” he added, though he didn't explain the reasons behind the threats. “Had the murdered been a Jew, the police would have never left a stone unturned until they found the perpetrators. We place the blame on the police for this crime."

Aida Mjadleh, deputy mayor of Baqa al-Gharbiyye, told Al-Monitor, “We wrote the police a letter saying we will continue to protest until the perpetrators are apprehended, and confirmed we won't sit idly by while violence is spreading in the Arab community.”

Mjadleh continued, “Murders of Arabs in Israel can easily happen because the perpetrators are aware that they will neither be sanctioned nor will the Israeli police prosecute them. And this has been the reason for arms prevalence and has driven up the crime rate.”

Kayan, a feminist Arab association based in Haifa, Israel, said in an Aug. 3 statement that 29 Arabs have been slain in Israel since early 2018 and denounced “the police’s negligence [in countering] this phenomenon.”

Among those 29 Arabs were eight women killed in separate incidents. Most recently among these was Noura Abu Salb, 37, who was killed Aug. 12 in the Negev in southern Israel. The police wrote it off as an honor killing, which is typically carried out by members of the victim's own family.

Insaf Abu Shareb, a human rights activist in the Negev, told Arab 48 that Abu Salb, a mother of seven, had been the subject of an assassination attempt not long ago and "was killed after she sought police protection." Shareb speculated that because Abu Salb was killed late in the day, the police "could not, or perhaps they did not want to protect her."

According to the report, Arabs were behind 40% of the acts of violence in the Arab community and 60% of the murders committed in Israel from 2014 to 2016. Although Arabs represent 12% of the Israeli population, 95% of the shootings occurred in residential areas in Arab towns, the report said.

The report also said that Arabs in Israel obtain arms from thefts in the first place, adding that gun theft rates in Israel increased 75% in 2016 over 2015. Arms smuggled from Jordan and areas controlled by the Palestinian Authority also end up in the hands of Arabs in Israel.

The Israeli security services have failed to prevent the increased use of unlicensed weapons in the Arab community. This is because Israel’s security services do not coordinate with each other when investigating the crimes and because the Arab community does not trust the Israeli police — which sometimes results in eyewitnesses declining to cooperate with Israeli investigators, the report said.

From 2014 to 2016, the police submitted a bill of indictment in only 3.7% of the investigated crimes involving the use of weapons in the Arab community, citing understaffing, according to the report.

Saleh Loutfi, director of the Center for Contemporary Studies in the Arab city of Umm al-Fahm, Israel, condemned the report’s apparent attempt to blame the Arab community for the spread of violence.

He told Al-Monitor, “Just like any other [minority] people of Israel, Arabs do not have an autonomous self-rule, and based on that, the police’s failure to assume their role of fighting crimes and prosecuting criminals has resulted in violence spreading in the Arab community.”