Ra'am has left the Joint List, saying it can't do the work needed to effect decision-making in Israel while tied to lawmakers who refuse to engage in the political process. 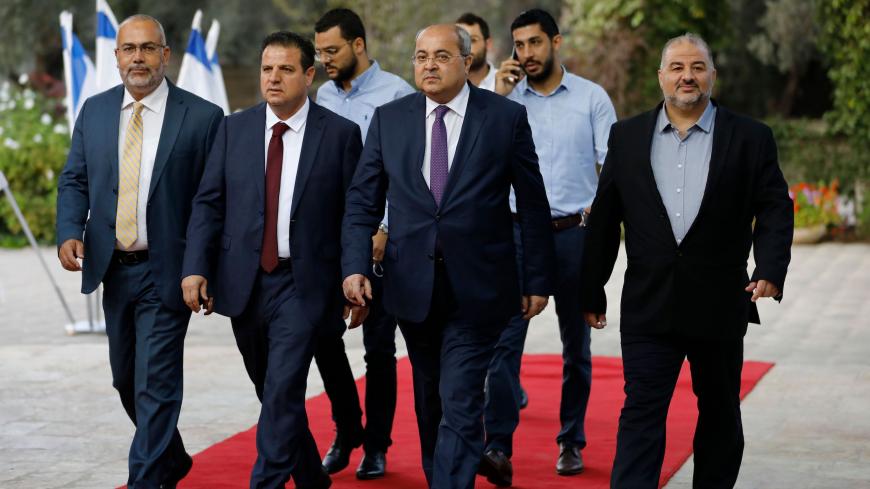 (L to R) Members of the Joint List Osama Saadi, Ayman Odeh, Ahmad Tibi and Mansour Abbas arrive for a meeting with the Israeli president to discuss who to task with trying to form a new government, in Jerusalem on Sept. 22, 2019. - MENAHEM KAHANA/AFP via Getty Images

Feuding between the parties that make up the Joint List had been going on for some time. It all ended when the Feb. 4 deadline arrived for the parties running for the 24th Knesset to submit their lists of candidates to the Central Election Committee. Suddenly, the Joint List was no more, at least in its previous constellation. It formally split up when the Ra’am faction, led by its chairman, Knesset member Mansour Abbas, submitted a separate list of candidates. Ra’am had decided to run on its own without the other parties that made up the Joint List.

Upon submitting his list, Abbas announced that Ra’am was setting off on a new path. “We are neither left nor right. We will work with everyone to advance the issues important to Arab society. We will work with anyone who works with us, in accordance with our values and the interests of the Arab public. As for whom we will recommend to serve as prime minister, we will leave that until after the election, once we have had a chance to examine every option.”

The head of the Joint List, Knesset member Ayman Odeh, submitted a list for the remaining three parties: Hadash, Ta’al and Balad, saying, “We continue to follow the path of equality through strength.” Knesset member Aida Touma-Suleiman (Hadash) explained, “The list that we are submitting today is the Joint List. Hadash is running in partnership with Ta’al and Balad. It is the same Joint List, even more closely united over its political principles and its approach to the struggle.” In an interview with Makan Radio that day, Knesset member Ahmad Tibi declared that he is “prepared to give up my second-place slot in favor of Ra’am in order to keep all the parties that make up the Joint List intact.”

This is not the first time that the Joint List has split apart. On the eve of the April 2019 election, Tibi announced that he was leaving the Arab political alliance because he felt that his own party, Ta’al, did not receive adequate representation within the list of candidates. It resulted in two Arab coalitions running separately: Hadash-Ta’al, which won six seats, and Ra’am-Balad, which won four.

There is, however, an important difference. The last time this happened, the split revolved around the distribution of seats between the constituent parties. This time, Ra’am’s ideology and its demand for a new approach to achieving the Arab public’s objectives were the impetus. In the background, cooperation between Abbas and Prime Minister Benjamin Netanyahu culminated in Ra’am abstaining from last December’s votes to dissolve the Knesset and to extend debate on the new budget, infuriating the other members of the Joint List.

In a speech to Ra’am, the head of its political bureau, Ibrahim Hijazi, shared that in negotiations with the rest of the Joint List, he had said, “You are ready to say that Netanyahu is your red line, but let’s discuss how we can impact the political map. With whom are you willing to work and cooperate, and with whom won’t you work?”

This question summarizes the most significant reason behind the party’s decision to split from the coalition. Ra'am's argument is that there is a group of people who just want the appearance of being lawmakers while another wants to do the work needed to effect decision-making in Israel.

So what does the Arab community think about the split? There is a clear desire among a growing number of Arabs to have a say in Israel’s political process. It could be the reason the Joint List recommended Blue and White leader Benny Gantz to be prime minister after the last election. The Arab public pushed for the Joint List to take action and nominate him rather than refuse to engage, like Arab parties did in the past.

Social activist Samir Abd Elhadi discussed the split in a conversation with Al-Monitor, saying, “I support the split into two separate lists because in the end, it will contribute to and help the Arab public. The split should create competition between the two lists to win the support of the Arab voter. It will cause Arab Knesset members to show greater interest in the needs of their electorate and focus on issues relevant to Arab citizens. It will improve the way they operate as parliamentarians.”

But there are also those who consider the split to a negative and even dangerous development. Political and media consultant and strategist Sami el-Ali told Al-Monitor, “The implications of this split in the Joint List for the political discourse and public activity in the nation’s interest are dangerous, because the background is an important debate over key issues on the Joint List’s social platform. Preserving a united front, particularly in the middle of an important debate over principles, is the real test for the constituent parts of the Joint List. In other words, it must preserve the strategic national political project of representing Arab society as a whole, despite the challenges and despite significant differences of opinion. What we have in common should supersede those differences. The continued existence of the Joint List with its four components in the middle of such a heated debate would prove to the Arab voter that the party represents genuine unity. And it would erase the image of the Joint List as a political entity whose partners are squabbling over seats and positions.”

When asked why the Joint List seems to have held no such discussion before now, he explained, “It should have been on the table since the Joint List was founded in 2015. The fact that it was ignored for five years hurt the parties themselves, their parliamentary activity and the political discourse within Arab society. It locked Arab Knesset members into a technical position, competing with the party’s other members over achievements.”

This is the real challenge facing Abbas and Ra’am. They must convince the Arab public that they offer an alternative instead of being in the pocket of one Jewish party or another over who will be the next prime minister.