Former Prime Minister Benjamin Netanyahu is going all out to undermine this week’s decisive vote on the 2021-2022 state budget. 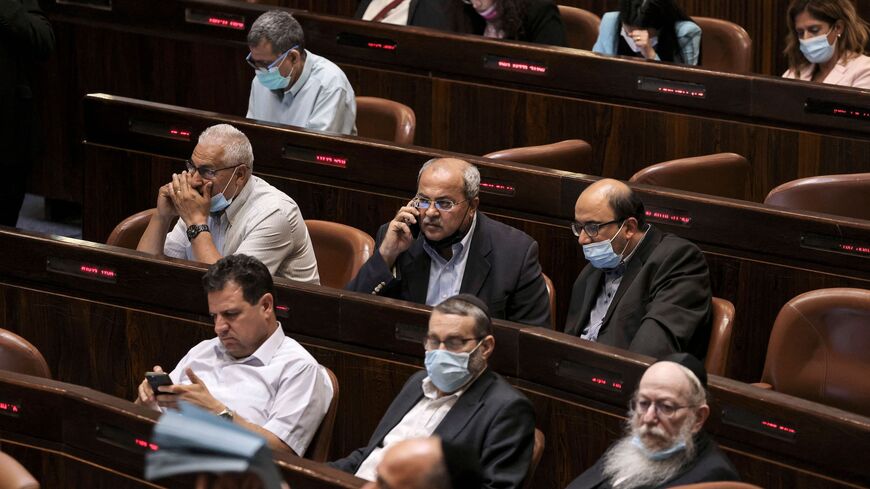 Ayman Odeh (bottom L) and Ahmad Tibi (C), members of the Israeli Knesset for the Joint List, and Yaakov Litzman (bottom R) of the United Torah Judaism Party attend a plenum session on the state budget on Sept. 2, 2021. - AHMAD GHARABLI/AFP via Getty Images

Barring any surprises, on Nov. 5, the Knesset should pass the state budget for 2021-2022. It will be a major milestone for the coalition, ushering in a long period of political stability and reducing the chances that the opposition could topple the government from the outside.

The last time the government approved a budget was March 2018, under then-Prime Minister Benjamin Netanyahu. For the next three and a half years, Israel continued to operate under the same budget. Amid a chronic political crisis, Netanyahu decided not to pass a new budget to prevent Defense Minister Benny Gantz from being replacing him as prime minister in accordance with their rotation agreement.

The decision led to the collapse of the unity government and the ensuing series of elections. Looking back, Netanyahu's move caused him serious harm, as putting his personal political survival over the country’s well-being cost him many voters.

For this reason, passing the budget this week will be considered a major achievement for the new government and a milestone on the road to political stability and national healing.

Nevertheless, the coalition’s extremely narrow majority makes the budget approval a dramatic and politically risky event that Israeli law considers a confidence vote in the government. Even though there are no real assessments that the budget will not pass, until the moment of truth, there is no way of knowing whether all 61 members of the coalition will vote in support of it. So far, no one in the coalition seems to want to bring down the new government.

The opposition, led by Netanyahu, is treating the next few days as its last chance to bring the government down. Netanyahu’s associates say that in conversations over the last few weeks, he has frequently said that it would just take one vote to bring the government down. There is also talk of the Likud sending out feelers to Knesset members from the ruling Yamina with all sorts of promises if anyone agrees to switch sides.

While all these efforts have ended in failure, the coalition is nervous. A lone Knesset member could still defect to the opposition at the last minute or, God forbid, be hospitalized and fail to participate in the final vote.

To minimize this uncertainty, the leaders of the coalition asked all Knesset members who are currently overseas to return to Israel no later than today. Bennett and the other ministers who joined him in Glasgow for the COP 26 Climate Summit flew home to Israel last night.

As they enter a marathon of debates and votes, which should last until Friday, Knesset members from the coalition have been asked to get plenty of sleep and avoid heavy foods so they will be clear-headed and at their best during the Knesset debates. It was even suggested that they wear comfortable clothing and bring sweets to help them stay awake. Yesterday, the leaders of the coalition held a dry run of the vote.

One anecdote illustrates how nervous the coalition is. By coincidence, hundreds of flu shots arrived at the Knesset today to inoculate all the Knesset members and their aids before the flu season begins. The coalition asked its members to postpone their vaccinations so as to avoid side effects that could impact the budget vote.

Although the opposition also believes that the budget will pass, it is nevertheless planning to exhaust the coalition with filibusters.

Likud circles outside the Knesset are challenging the coalition’s legitimacy, targeting the Ra’am Party headed by Mansour Abbas. Likud activists accuse it of having improper ties with the Assistance 48 Association, which supports Gaza orphans and widows. The campaign against Ra’am claims that the association receives public financial support and that some of the money has been transferred to Hamas in Gaza, based on an investigative report by Channel 13 News. Netanyahu posted the report on Twitter, writing, “Unbelievable.”

Meanwhile, at a right-wing demonstration in Tel Aviv Nov. 2, Likud lawmaker Fateen Mulla told the crowd that Mansour Abbas is “taking the money and killing our soldiers.”

Ra’am denied the charges, saying that the Likud was behind the report and claiming the Likud was making false accusations to blow up the budget. Nonetheless, the Likud continued its scathing attacks on Ra’am as well as Bennett for allegedly allowing the scandal to happen. One slogan cries, “The budget has blood on its hands!”

Abbas responded by accusing Netanyahu and the Likud of inciting the public against him. He has given numerous interviews over the past few days to address the matter as well as discuss Netanyahu’s promises to him during coalition negotiations half a year ago. He said that the Likud offered the party “everything we have received in the current government.”

The chair of the coalition, Knesset member Idit Stilman of Yamina, said that the accusations are categorically untrue and that none of the state budget is going to Hamas. She said, “It is fake news that makes a nice sound bite, but that will not stop us from passing the budget.”

Despite all the background noise, it seems inevitable that the government will succeed in passing the budget. Despite the difficulties and squabbling within the coalition, none of its members have a better alternative.

Netanyahu's rise in the polls is a vital factor holding the government together. The fear of a Netanyahu comeback is especially strong for the parties on the right, who are rapidly losing voters. According to a Channel 13 poll, if elections were held today, the Likud under Netanyahu would win 36 seats, while Yamina headed by Bennett would win just six. Yisrael Beitenu, headed by Finance Minister Avigdor Liberman, would drop to four seats, while Justice Minister Gideon Saar’s New Hope Party would not even pass the electoral threshold. As it falls in the polls, the government is more committed than ever to passing the budget.