Not everyone in the Bedouin community approves of the five-year development plan recently adopted by the government, as it does not resolve the issue of unrecognized Bedouin villages. 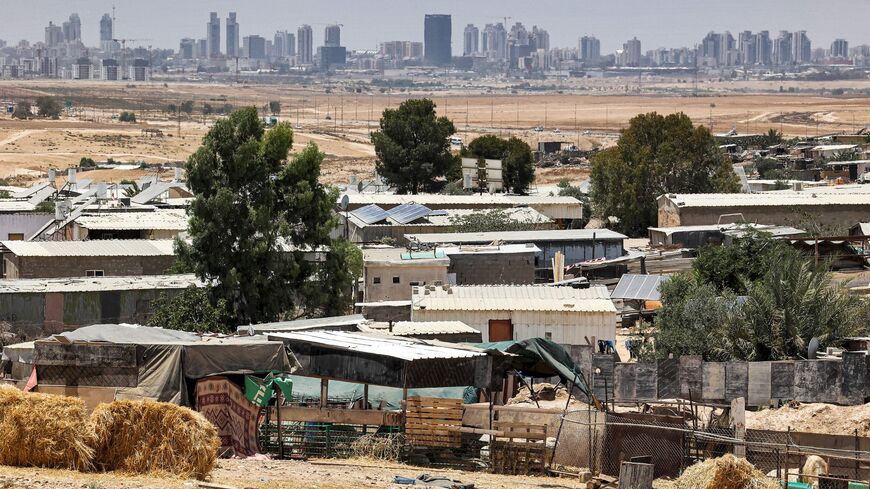 This picture shows a view of houses in the unrecognized Bedouin village of Sawaneen, Negev Desert, Israel, June 8, 2021. - Hazem Bader/AFP via Getty Images

Instead of approving development budgets for the Bedouin community inside the framework of one plan for the whole Arab sector, the government opted for taking two separate decisions. The reason was the unique needs of the Bedouin community, because of the enormous gaps between it and the rest of the Arab community.

This can only point to the extent that the Bedouin community has been neglected over the years. The new plan was formulated in cooperation between the relevant government ministries, headed by the Welfare Ministry that oversees the Authority for the Development and Settlement of the Bedouin in the Negev, and Bedouin local authorities. Ra’am Chairman Mansour Abbas has been apprised of the negotiations and decisions reached. As part of the plan, the government will focus on several main goals: strengthening local authorities, infrastructure development, and investment in personal security, education, culture, health care, employment, transportation, and so on.

With the plan’s authorization, Welfare Minister Meir Cohen, who is responsible for the regulation of Bedouin villages in the Negev Desert, announced, “Returning law and order to the Negev must run through massive economic and social investment in the Arab community. The plan that the government passed is the key to a better and more secure future for all residents of the Negev.”

Right-wing politicians from the opposition often lambast Prime Minister Naftali Bennett over budgets solicited by coalition member Muslim party Ra’am. This could explain why alongside deciding on the five-year program for the Bedouin community, Bennett announced the establishment of a new ultra-Orthodox city in the Negev Desert. Interior Minister Ayelet Shaked and Housing Minister Zeev Elkin also announced the establishment of the ultra-Orthodox town of Kasif in the Negev and the Nitzana settlement on the Egyptian border.

Bennett, Shaked and Elkin apparently needed to offer something to their electorate, not only because of the Bedouin plan but also because the way it was approved. The 2017-2021 plan included an enforcement clause, with the goal of preventing Bedouins illegally taking possession of public-owned lands (herding on state lands, building small villages without permits, etc.). Eager to offer his electorate — many of them in the Negev — a true achievement, Abbas fought hard against including the clause in the new plan. He did not forget that the Bedouins and Israeli Arabs residing in the south were responsible for him getting into the Knesset in the first place. His position was supported by Cohen, with Shaked and Elkin objecting. In the end, Abbas won the battle. The clause was removed from the new plan before its approval. Instead, the clause was passed separately in the Internal Affairs and Environment Committee, headed by Shaked.

That being said, Abbas did not get exactly what he wanted, but rather had to agree to a compromise. When Elkin and the director of the Israel Land Authority presented the enforcement-clause plan, they emphasized that it would include tree plantings by the Jewish National Fund (JNF) in the Negev, including in areas adjoining unrecognized Bedouin villages.

As a reminder, this step led to a wave of riots in the Negev in January. More so, when officials came to expected planting sites for measurements, opposition right-wing members tried to fan the flames and embarrass the fragile coalition by arriving there as well. At the height of the crisis, Ra’am Knesset members decided to boycott the Knesset plenum in protest over JNF planting in the Negev, which they claim harm Bedouin residents.

The choice of the current timing for renewing the planting was perhaps not coincidental. With the Knesset plenum closing for winter recess, Ra’am will find it harder now to mobilize its people against planting. It cannot boycott Knesset votes, refrain from participating in debate or block in any way the work of the government, thus embarrassing the coalition, simply because there are no parliament meetings until the end of the recess.

But despite the meaningful amount of funding included in the plan, not everyone in the Bedouin community is pleased with it. One of the dissenters is a professor of social sciences — Amer El-Hozayel of Rahat. In conversation with Al-Monitor he defined himself as a Palestinian academic and an expert in strategic planning.

He said, “The plan at the scope of 5.2 million shekels is intended mostly to concentrate the Bedouin community in existing towns by making them [the towns] more attractive and influencing Negev Bedouins to move to the cities. If we look at the results of the previous five-year plan, we will see that there was no discernable improvement in economic or health issues, for instance."

Hozayel added, "Even though they removed the enforcement clause, I call the plan political blackmail since it completely ignores the issue of unrecognized villages, which is the burning issue for the Bedouin community. … It [the plan] does not solve the primary problem of unrecognized villages and the housing crisis in existing [Bedouin] towns by expanding their territory, so I think it offers very little help.”