The crisis within the coalition over a forestation project on lands used by Bedouin communities in the Negev has won Israel’s opposition some victories in the Knesset. 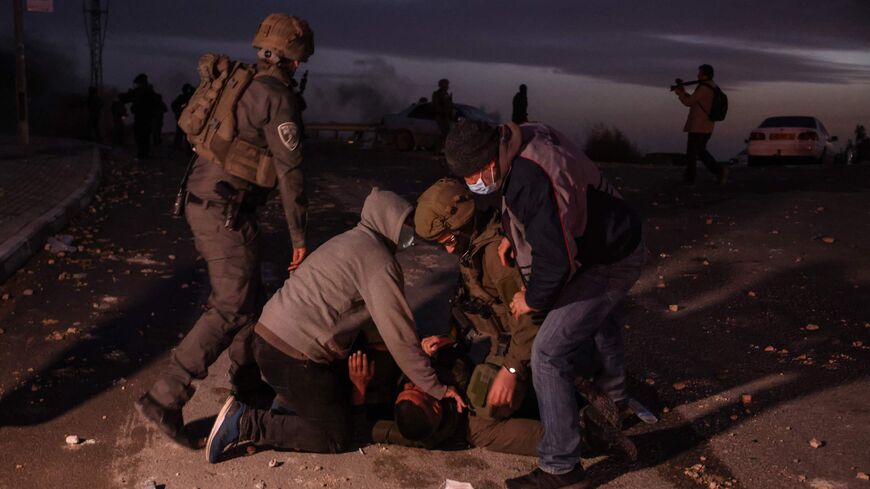 Israeli security forces and undercover police arrest a young Beduin demonstrator during a protest in the southern Israeli village of Sawe al-Atrash in the Neguev Desert against an forestation project by the Jewish National Fund, on Jan. 13, 2022. - MENAHEM KAHANA/AFP via Getty Images

On Jan. 12, Israel’s Change coalition suffered its worst crisis since its establishment seven months ago. The Islamist Ra’am faction abandoned ship and the opposition scored a series of victories.

The downfall followed three days of riots in the Negev region, with stone-throwing and clashes between Bedouins residing in the area and the police. Some of the Bedouin rioters were arrested.

The unrest was a reaction to a tree-planting project by the Jewish National Fund that the Bedouins saw as an attempt by the state to displace them from lands they were cultivating.

Ra’am and its leader Mansour Abbas were largely supported at the last elections by the Bedouins in the south. Abbas knows that if he does not serve their interests, he may well find himself outside the political system in the next election round. But the coalition Abbas is part of includes right-wing ministers and Prime Minister Naftali Bennett, to whom any concession on the issue would be an ideological faux pas.

When it first broke out, the crisis seemed possible to resolve by compromise. But since then, it has blown up and is now threatening the coalition, which has a weak minority of only one Knesset member.

Ra’am Knesset members were not the only ones to abandon the plenum in protest. Legislator Nir Orbach, a crony of Bennett, broke under the pressure of his right-wing electorate (which felt that Bennett was giving in to Ra’am) and abandoned the plenum as well.

Another player helped stoke the commotion: former Prime Minister Benjamin Netanyahu, who heads the opposition. When the dispute broke out Jan. 10, he instructed his Likud faction to do its utmost to embarrass the government and Bennett.

Likud Knesset members went out to plant trees in the Negev Jan. 11, an event that was well covered by the media. From the other side, Foreign Minister Yair Lapid stated that their presence only stirred up the rioters. Meanwhile, Joint List lawmakers also went to the Negev. Abbas told journalists that the coalition was a stabbing him in the back with the tree project and demanded that the plantings stop.

Welfare Minister Meir Cohen of Yesh Atid tried to broker a compromise but didn’t manage to lower the flames. With the first phase of planting preparation completed, the work stopped. Still, Abbas carried through on his threats and boycotted the voting process.

Two people proved victorious that night. The first was Abbas, who make it clear to the government that he, not Bennett, was in charge and had no problem rocking the coalition.

The second winner was Netanyahu. His associates celebrated the humiliation that Abbas inflicted on the coalition. They claimed the whole affair proved that Ra'am is really running the government. Netanyahu tweeted, “No one will stop us from planting trees in the Land of Israel. I give full backing to our armed forces and demand that Bennett immediately censure Ra’am — his top partner in the government — for incitement.”​​​

There were also accusations exchanged within the government. Players from the left accused Housing Minister Ze'ev Elkin (New Hope) of fanning the flames. According to them, Elkin could have put an end to the escalation with a directive to stop the plantings, as was within his purview. Instead, he ordered it to continue. The argument was that Elkin had not freed himself from his right-wing electorate; instead, he was playing on two courts, perhaps to make his way into the next government. Elkin's associates denied these accusations, claiming he only found out about the planting after the fact, when it was too late to do anything.

Since then, it emerged that Netanyahu’s standing in the polls is getting stronger, while the right-wing parties in the government are losing strength.

It is much too early to guess whether the bitter crisis in the coalition is the beginning of its end. It is clear, however, that even after passing the budget and stabilizing the government, none of the partners can rest on their laurels.

Abbas feels that he has paid too high a price already and dares not budge on anything in the Negev, even if it leads to the end of the government. But Abbas is also the first to understand that Bennett can’t afford to gamble on the future of the government and therefore will not cut the rope.

Bennett has kept quiet on the Negev crisis and left it to Foreign Minister Yair Lapid, who announced quickly that he is seeking a compromise. Lapid’s center-left voters have no problem with such an approach and the right-wing parties in the government are left to pay the price. It will surely be high.