Most experts believe Prime Minister Benjamin Netanyahu will not open a new military front just to avoid his downfall, but will use every dirty political trick in the book to stay in power. 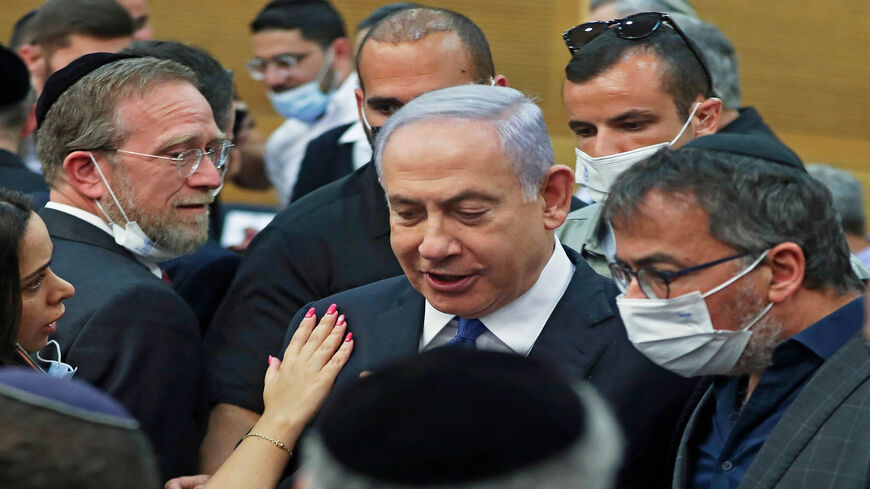 “If we need to choose — and I hope it will not happen — between friction with our great friend, the US, and getting rid of an existential threat, getting rid of an existential threat will prevail,” Prime Minister Benjamin Netanyahu declared June 1 at a farewell ceremony for Mossad Director Yossi Cohen and swearing-in of his successor, David Barnea.

Netanyahu’s statement, two days before Yesh Atid leader Yair Lapid and Yamina leader Naftali Bennett reported to President Reuven Rivlin that they had mobilized sufficient Knesset votes to form a new government, prompted concern among security officials. Was Netanyahu considering setting the region on fire to avoid handing power to a new government after 12 successive years in office (and 15 in all)?

Defense Minister Benny Gantz, who is designated to remain in his post in a Lapid-Bennett government — if it is indeed installed — hastened to respond, saying, “Even if there are disagreements [with the United States], they must be solved behind closed doors and not with defiant rhetoric that could harm Israel’s security.” Designated Prime Minister Bennett adopted Gantz's line. In an interview with Channel 12, Bennett said he could stand firm with the Americans on the Iran issue, but that it would be preferable to resolve differences through dialogue.

In addition to the juggernaut Netanyahu is deploying to pressure Yamina Knesset members to jump ship, is the prime minister willing to drag Israel into a war to preserve his hold on power? After all, Lapid and Bennett had finalized most details of their power-sharing deal in early May prior to the eruption of tensions in Jerusalem and the ensuing war with Hamas and Jewish-Arab rioting within Israel. The answer depends on whom you ask.

“Netanyahu cannot set fire to the Middle East on his own,” a senior Israeli defense source told Al-Monitor on condition of anonymity. “And I’m not convinced he would want to. Another round of fighting with Gaza would not change anything. After all, he has just emerged from one such round. War with Hezbollah and Iran would be a fundamental strategic event transforming the face of Israel, and Netanyahu is unlikely to emerge from it as prime minister,” the source said.

“And anyway, he is not in this alone; there’s a defense minister, a military chief-of-staff, heads of security agencies, the security Cabinet. Luckily, such things are not clinched between Bibi and his family at the residence on Balfour Street, and I would therefore advise you to stop worrying,” the source added.

What, then, is Netanyahu capable of doing to prolong his rule? Domestically, of anything and everything. An Al-Monitor piece following the Jan. 6 Capitol invasion in Washington examined the possibility of Netanyahu engineering such an event in Jerusalem, with masses taking over the Knesset or the Supreme Court, or both, to destabilize the existing order and preserve Netanyahu’s government. In a conversation with one of his top government ministers last year (unnamed), when he was asked what he would do once his corruption trial starts at Jerusalem’s District Court, Netanyahu’s response was nothing short of amazing: “The public will not let this trial take place,” he said.

For now, his prophecy remains just that, a prophecy. The evidentiary phase of the trial is underway, as is Netanyahu’s war of survival, which is on its final and most conceivably dangerous leg.

Netanyahu is now applying heavy pressure on five Yamina party members and on a handful of others from the New Hope party of Gideon Saar, all of them right-wing ideologues who broke with Netanyahu over his refusal to step aside despite his criminal indictment.

So far, Netanyahu’s steamroller has flattened one Yamina lawmaker, Amichai Chikli, who announced two weeks ago that he would not vote for the emerging government headed by his party leader, Bennett. His decision brought support for the Bennett-Lapid coalition to a bare bones minimum, leaving it with a precarious 61-seat majority in the 120-seat Knesset. Just one other defection from the Bennett-Lapid ranks would sink their dream. Although some of the six Knesset members of the Arab Joint List have indicated they would support this coalition in Knesset voting, most of the coalition’s right-wing members refuse to be beholden to Arab support. One exception is their willingness, however reluctant, to include the Islamist Ra’am party in their coalition — but only after Netanyahu himself conducted negotiations with the party and thereby gave it a right-wing seal of approval.

Netanyahu is focusing most of the pressure on two Yamina Knesset members greatly conflicted over joining a government with left-wing and Arab parties and ditching Netanyahu’s Likud — Nir Orbach, a close Bennett ally and Bennett’s long distance running mate, Knesset member Ayelet Shaked. Shaked has been offered tempting incentives to join the putative government, including an eventual return to her past position as justice minister and a seat on the judicial appointments committee. While she may have come to terms with the inevitable direction Bennett has taken, Orbach remains a wild card. On June 3, he withdrew his signature from the list of lawmakers demanding the replacement of Knesset Speaker Yariv Levin, a move that would have facilitated the swearing in of a new government. His move, which nixed the installation of a new speaker, does not bode well for the fragile coalition.

Orbach is now under pressure from both Netanyahu and Bennett himself. On the evening of June 3, he tweeted a restrained message of support for Bennett after a meeting with the Yamina leader at Bennett’s home, but left all his options open. He will likely waffle and deliberate until the last minute before the Knesset votes on the new government, probably on June 9 or June 14, signaling unprecedented political tensions in the coming days.

Netanyahu is throwing everything he has into his “remain” campaign. His scary and well-oiled propaganda machine and brainwashed acolytes demonstrating and screaming through powerful megaphones are spewing out his message. Social networks are awash with slurs against Bennett, echoing Netanyahu’s accusation that he had committed the “fraud of the century” by reneging on his campaign promise to withhold support from Lapid and refuse to join a coalition with Ra’am. Netanyahu’s serial pledge violations have all but been forgotten.

This is Netanyahu’s final stand. There is no telling how it will end given his loss of all inhibitions. His family has reportedly started moving large boxes out of the official residence in Jerusalem to one of the family’s private homes in the city, but Netanyahu will not give up until all is lost, and even beyond. The memory of the "dirty trick" that the late leader Shimon Peres used to bring down the Likud government of then-Prime Minister Yitzhak Shamir is still fresh in his mind despite the 31 years that have passed. The Peres plot to replace Shamir appeared on the verge of success, when two ultra-Orthodox lawmakers caved in to right-wing pressure and withdrew their support.

Along with the pressure and smear campaign he is orchestrating, Netanyahu is also promising riches to anyone who defects from the Lapid-Bennett camp before it is too late. Will Yamina’s lawmakers withstand the pressure? We will only know after the vote.