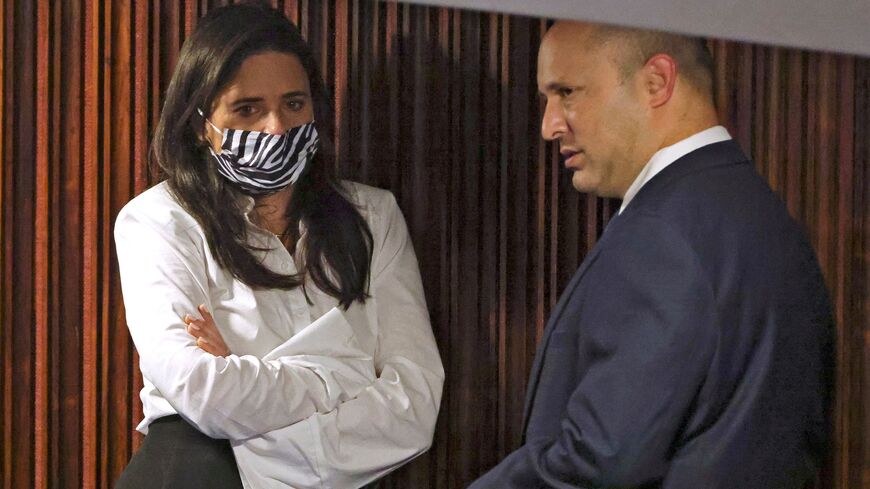 Ayelet Shaked (L) and Naftali Bennett, Israeli lawmakers from Yamina, chat during a special session of the Knesset, Israel's parliament, in Jerusalem on June 2, 2021. - RONEN ZVULUN/AFP via Getty Images

Even now, with the new government to be sworn in as early as June 9, Prime Minister Benjamin Netanyahu refuses to give up.

In a June 3 headline, The New York Times announced, “Netanyahu Rivals Agree on Coalition to Oust Him.” The news echoed in other leading newspapers around the world. The same caveat was buried several paragraphs below the lede: “In the meantime, Mr. Netanyahu,… is doing all he can to upend the agreement.”

Netanyahu is focusing on Yamina, headed by the new prime minister-in-waiting, Naftali Bennett.

Yamina is a party to the right of the Likud, with a base driven largely by ideology. Now, that base is in turmoil. In his capacity as party chair, Bennett controls just seven seats in the Knesset, making it one of the smaller parties in the new government. Nevertheless, he seems to have broken just about all his campaign promises. He said he would not be part of a coalition with Ra’am chair Mansour Abbas, who allegedly supports terrorism. He promised that he would not allow Yesh Atid chair Yair Lapid to become prime minister because Lapid was a leftist, and the same goes for the leaders of Meretz and Labor.

Bennett made those statements not only to his electorate, but also to Yamina's Knesset members, all of whom he handpicked, in personal conversations. Now they are torn between their commitment to him and their faith-driven belief system as members of a religious party. A month ago, Bennett lost the support of one of his party’s newest Knesset members when Amichai Chikli announced that he would likely vote against the new government.

Now, another Yamina Knesset member is considering voting against it, too, denying new 61-seat coalition the majority it needs to pass a vote of confidence in the Knesset. Nir Orbach, 51, is a veteran of the religious Zionist establishment. He has served as Bennett’s right hand man and is a key representative of party’s faith-driven base. But now Orbach is struggling with the new coalition supported by the Islamic movement and the Israeli left. He is torn between his commitment to Bennett and his personal ideology, leaving the door cracked for Netanyahu to try to force his way in.

For days, Netanyahu has been trying to get through to him. Dozens of calls from the prime minister’s office have gone unanswered. Netanyahu did manage to get through to Orbach’s religious mentor, Rabbi Yosef Shanah and recruited his help. Shanah spoke with Orbach and then went to the media to share the Knesset member’s agonizing deliberations.

Shanah wasn’t the only rabbinic authority Netanyahu recruited to pressure Orbach. He also called on Rabbi Chaim Druckman, 88, a senior figure in the religious Zionist movement who took part in the demonstration outside Orbach’s home in Petah Tikva on Thursday.

Netanyahu urged Likud Knesset members to join the demonstration outside Orbach’s home and encouraged Bennett’s base, the settler movement, to take action against Yamina. On Thursday, the prime minister held an emergency meeting in his office with the heads of the Yesha Council, the umbrella settler organization once headed by Bennett, and encouraged them to organize demonstrations outside the homes of Yamina’s Knesset members.

Netanyahu is using social media to challenge Bennett’s legitimacy with upbeat videos of Bennett promising not to join a coalition with Lapid. Posted with captions like "You Lied," the videos describe the future prime minister as the greatest con man in Israeli politics and depict Bennett as a man with no moral compass, who sold his principles for a role in the government. New videos of Bennett and his political partner Ayelet Shaked appear from Netanyahu’s Twitter and Facebook accounts around the clock.

Over the last few years, Netanyahu, Israel’s seemingly permanent prime minister, never stopped fighting for his place at the top of the political pyramid. He is doing things other people in his position might leave to minor functionaries. Up until the coalition agreement was signed with Abbas on Wednesday night, Netanyahu offered him far-reaching concessions and indulgences if only Abbas would prevent the new government from being sworn in.

According to one senior political source who spoke on condition of anonymity, Netanyahu told Abbas just hours before the coalition agreement was signed, “Only I can get this through. All their promises are on slippery ground. I believe in change. I want to make change with you.”

For Netanyahu, the stakes are enormous. If he fails, a new government will replace him in just a few days. Netanyahu, now 72, will be sent to the opposition benches to plot his return to power. But the fight isn’t over until the new government is sworn in.

Ever since he was first sworn in as prime minister at the age of 47, stories have been circulating about Netanyahu’s past as an officer in the Israel Defense Forces’ most elite commando unit and his exceptional tenacity. Former Prime Minister Ehud Barak, who was once Netanyahu’s commanding officer, has been quoted as saying, “Don’t underestimate Netanyahu. His most outstanding feature is his persistence. He is stubborn. He never gives up, just like a Doberman pinscher.”

All sorts of apocryphal stories have been told about Netanyahu. He has been called a “magician” and “phoenix.” It is this stubbornness that helped him to survive for so long, even after he got tangled up in criminal investigations. This time, however, it looks like the “magician” might finally be trapped.