Foreign Minister Yair Lapid will take over as prime minister. 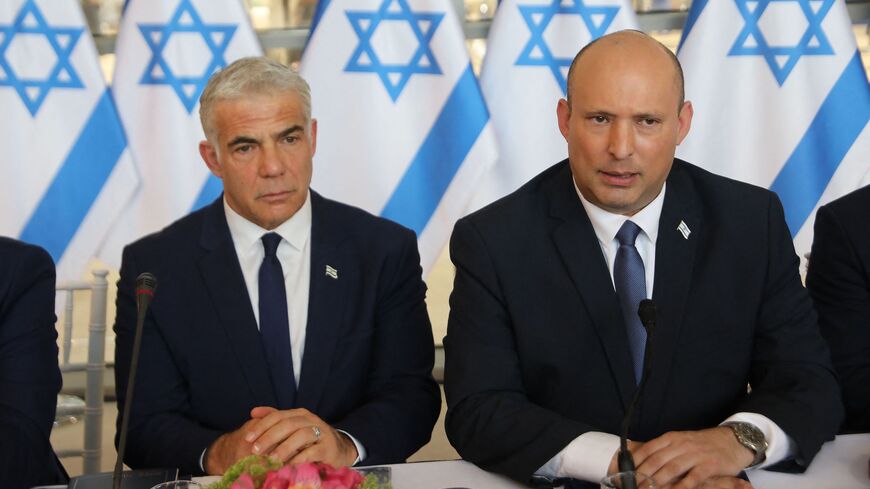 Prime Minister Naftali Bennett and Foreign Minister Yair Lapid agreed a short while ago to dissolve the Israeli parliament next week. With this, the country will see its fifth election in just three-and-a-half years. In a joint statement, Bennett and Lapid said they will bring on Monday a proposal to disperse the Knesset, which means that new elections will take place at the end of October.

According to the rotation agreement, in the event the government falls because of Yamina rebel members, alternate Prime Minister Lapid will take over as head of the interim government. The joint statement noted that "Once approved, the rotation will be performed in an orderly manner. Prime Minister Bennett is now talking to party leaders." While serving as prime minister, Lapid will continue to serve as foreign minister. Bennett will serve as alternate prime minister.

Reportedly, Bennett and Lapid met briefly this afternoon. In their statement, they said they decided to dissolve the parliament after exhausting all possible avenues for stabilizing the coalition.

Reports say that the decision was taken following a meeting Bennett had last Friday with Attorney General Gali Baharav-Miara. The coalition had lost its majority mainly over the government failing to extend regulations implementing Israeli criminal law over West Bank settlements. Bennett realized that the regulations cannot be extended in any way outside Knesset approval, and thus decided to go ahead and disperse the Knesset. With the Knesset dissolved before the regulations officially expire, they will be extended automatically.

Justice Minister Gideon Saar tweeted after the announcement, "As I warned, the irresponsibility of some Knesset members in the coalition led to the inevitable result. The goal in the upcoming elections is clear: to prevent [former Prime Minister Benjamin] Netanyahu from returning to power and preventing the enslavement of the state to his personal interests."

Health Minister and head of left-wing Meretz Party Nitzan Horowitz tweeted, "This government has succeeded above and beyond. This is a historic government that has saved Israeli democracy. I'm proud of us being part of it. We made a huge effort to preserve it. Its achievements will be remembered for many years to come. Meretz will continue to work for Israeli society, and we will fight in the upcoming elections for our values ​​and our way."

Speaking at a joint press conference this evening with Lapid, Bennett said, "We are facing you today in a difficult moment but with the understanding that we made the right decision for Israel. A year ago, we formed a government that many thought was impossible. We formed the government to stop the terrible spin Israel was caught up in. Israel of one year ago was plagued with unemployment, a big deficit, riots, missiles on Jerusalem. The government was severely paralyzed. I decided to act. It was the hardest decision in my life, but also the most Zionist one. With God’s help, we managed to form a government. Together, we pulled the government out of the hole it had fallen into."

Bennett complemented Lapid and pledged to stand by his side during his tenure as transition premier. "Yair embodies virtues of responsibility and fairness, and he represents a large public in Israel. We had disagreements between us, but both of us act solely for the best of the country. In the coming days, I will help him with an orderly transition. I will stand by his side and help him with everything he needs."

Reacting to the announcement of Bennett and Lapid, opposition leader Benjamin Netanyahu said that he and his political allies will form a government headed by the Likud, noting that his new government "will restore the national pride to the citizens of Israel, reduce taxes and expand peace agreements as it did before."