The government is now trying to expedite the disbanding of the Knesset and conclude the process within a week to avoid a situation in which the opposition could establish an alternative Cabinet. 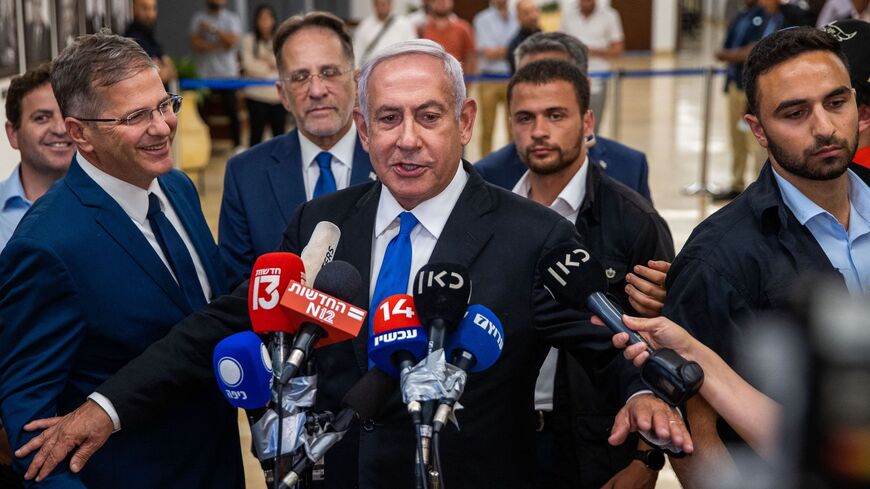 Israel's former premier Benjamin Netanyahu speaks to the press at the Knesset in Jerusalem on June 20, 2022. Israel's Prime Minister Naftali Bennett said that Foreign Minister Yair Lapid "will soon take over" as premier after the pair agreed to dissolve their fraught governing coalition and trigger new elections. - OREN BEN HAKOON/AFP via Getty Images

The Knesset House Committee approved today for the coalition to present tomorrow for vote a proposal for dissolving the parliament. Thus, a preliminary hearing is expected to take place June 22. If approved, and after approval by the Knesset’s Judicial Committee, second and third hearings will take place next week, either on Monday and Wednesday, for the bill to be definitively adopted.

Once the bill is adopted, the Knesset will be dispersed and cease to vote on private bills until new elections take place. The government will continue to function as a transition Cabinet, which means it should not nominate senior officials unless it is an emergency. This raises the question of the nomination of the next IDF chief of staff. Also, the failure of extending regulations implementing Israeli criminal law on West Bank settlements was one of the issues cited by Bennett as a reason for his decision. With the Knesset dispersed before the regulations expire, they would be extended automatically, without a Knesset vote.

Israeli law stipulates a period of at least 90 days between the adoption of the law and for new elections to be held. It now seems that elections could be held either Oct. 25 or Nov. 1, after the Jewish holiday period, but the date would be officially fixed after the vote next week and in consultation with the country’s Central Election Committee.

Earlier today, the Knesset Presidium accepted a request submitted by Yesh Atid legislator Boaz Toporovsky and New Hope legislator Sharan Hashakel to add to the June 22 legislative agenda the abovementioned proposal for disbanding the Knesset. After that, the government asked the Knesset House Committee for a waiver of the 45-day traditional waiting period between submitting a legislation draft and an initial vote.

The Knesset House Committee is chaired by legislator Nir Orbach of the ruling Yamina party. A few days ago, Orbach signaled he no longer supports the government headed by Prime Minister Naftali Bennett. Without Orbach, the coalition has only 60 to 59 legislators supporting it. Orbach’s support of the opposition could in theory at least topple the government and even enable it to establish an alternative Cabinet. Thus, the coalition feared that Orbach would refuse the request for a preliminary vote tomorrow or delay it. Still, that did not happen, and the committee approved for the vote to take place. Nevertheless, Knesset members of the Likud are expected to present a private bill tomorrow for dispersing the Knesset.

Coalition leaders want to complete the move as quickly as possible to prevent the opposition from forming an alternative government in the current Knesset. This is legally possible if the parliament is dissolved and if at least 61 parliamentarians out of 120 vote in favor of another coalition. Former Prime Minister and opposition head Benjamin Netanyahu said yesterday, after the announcement of Bennett and Lapid on the Knesset dissolvement, that he intends to present an alternative government, though analysts believe he won’t manage to gather 61 legislators in favor of that.

Reports say that the new expected elections, the fifth within less than three-and-a-half years, would cost 3 billion shekels ($870 million). Reports further note that dispersing the Knesset would halt a series of economic reforms, including raising the minimum wage.