Today’s procedural step in the Knesset moves the Israeli coalition government closer to dissolution and elections in the fall. 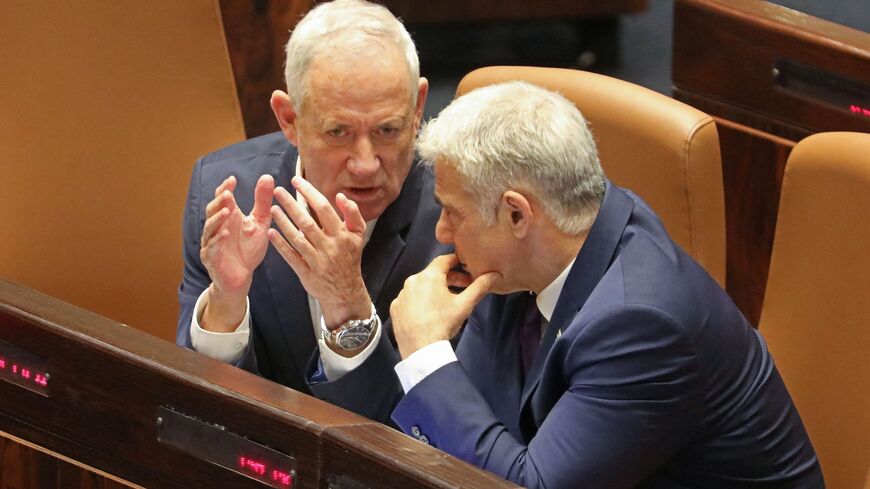 Israel's Defense Minister Benny Gantz and Foreign Minister Yair Lapid attend a preliminary vote on a bill to dissolve parliament and call an early election, at the Knesset in Jerusalem on June 22, 2022. - GIL COHEN-MAGEN/AFP via Getty Images

The Knesset approved today in a preliminary hearing 11 bills for dispersing Israel's parliament. An overwhelming majority of 110 legislators without anyone objecting supported the bills. The 11 similar bills — nine by the opposition and two by the coalition — were joined into one package, requiring one single vote.

Yesh Atid legislator Boaz Toporovsky said, "This is a sad day for democracy. We are doing it with a heavy heart but without regrets, because the good of the state has always been and will always be before anything else."

Still, the road for dissolving the Knesset is complicated. Prime Minister Naftali Bennett and Alternate Prime Minister Yair Lapid would like to see the Knesset dissolved as soon as possible to prevent the Likud and the opposition from establishing an alternative government headed by former Prime Minister Benjamin Netanyahu. The opposition could advance such a move if it gathers the support of an absolute Knesset majority, namely at least 61 legislators. For the moment, it is unclear if the opposition would indeed have the requested support for such a move.

Normally, in order for the Knesset to disperse, the Knesset House Committee must approve the preliminary-approved bill for a first hearing. After the first hearing, the bill returns to the Constitution, Law and Justice Committee, which prepares the text for second and third final hearings.

The problem is that the House Committee is chaired by rebel Yamina Knesset member Nir Orbach, who signaled he would stall discussions, offering the opposition time to try and assemble a majority for an alternative Cabinet. Faced with Orbach’s reluctance, the coalition now tries to bypass the House Committee, having the Constitution, Law and Justice Committee approve the bill for the first hearing. It is unclear yet if such a legal maneuver would indeed work.

Meanwhile, representatives of the coalition and opposition tried this morning to negotiate an agreed date for the elections. Likud conditioned an agreement — be it the date of the elections or bills that could be approved before the Knesset is dissolved — on the coalition canceling its move of qualifying Yamina party Knesset member Amichai Chikli as a renegade. Having been qualified as such, Chikli is prevented from running in the next elections in any currently existing party. For the moment, the coalition rejects any requests to go back on this move.

Alongside the bill for dissolving parliament, the coalition pushed this morning a bill that would bar a lawmaker charged with a serious crime from becoming prime minister. The bill targets specifically former Prime Minister Benjamin Netanyahu, who is on trial for fraud and bribery.

Prime Minister Naftali Bennett said today that he himself is against such a proposal, as Israeli voters could express their opinion on this issue at the polling booth. Nevertheless, he would enable his faction members to vote freely. Reports estimate that the bill — sponsored by Yisrael Beitenu legislator Yevgeny Soba — is unlikely to pass.