Israel's evolving security crisis has put a damper on the formation of a new government. 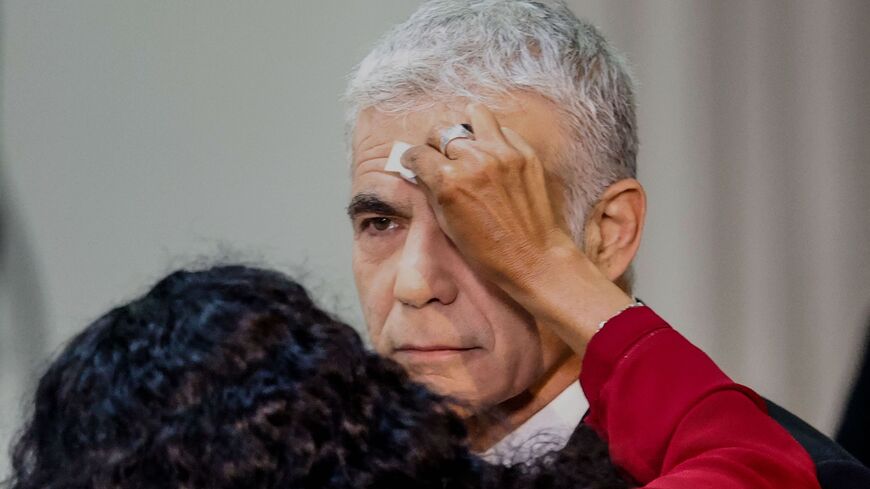 A makeup artist prepares opposition leader and chairman of Israel's Yesh Atid party Yair Lapid before a press conference in the Israeli coastal city of Tel Aviv on May 6, 2021. - JACK GUEZ/AFP via Getty Images

Last week, it looked highly likely that a new government was about to take over in Israel. Then the security situation escalated, throwing more obstacles in the path of a new government headed by Yamina chair Naftali Bennett that would relegate current Prime Minister Benjamin Netanyahu to the opposition benches.

Until around noon yesterday, the leaders of the change bloc seemed optimistic that a new government would be announced very soon. They had already allocated portfolios and were negotiating the guidelines for the new coalition. The participating party leaders all believed that by the end of the week, Yesh Atid head Yair Lapid would inform President Reuven Rivlin that he had succeeded in forming a coalition.

Such a coalition is still possible, but it faces serious new obstacles. If such a government does finally come together, it will be a much younger one than the current cabinet. Many of its members would be first-time ministers. For its first two years, the new government would be led by Bennett, who is just 49. Lapid, 57, would take over for the final two years.

The two men formed a fresh new political alliance in the 2013 election, forcing Netanyahu to leave the ultra-Orthodox parties in the opposition. But Lapid and Bennett went in different directions over the next few years and their relationship became cordial but cool.

They reestablished ties before the last March election as political chaos loomed, intent on replacing Netanyahu and changing the face of Israeli politics.

The moment Netanyahu failed to form a new coalition on May 4, Lapid and Bennett went to work. By the end of last week, they were meeting in Lapid’s Tel Aviv apartment to negotiate the creation of a new coalition. The location soon shifted to a hotel suite in Kfar Maccabiah near Tel Aviv. Ironically, Netanyahu once based his own coalition negotiations in this particular hotel. It is quite possible that Lapid and Bennett chose the site to signify that a new generation was about to take over.

But then the political cards were reshuffled in a matter of hours. Yesterday afternoon, Hamas issued an ultimatum to Israel that if it did not withdraw its forces from Jerusalem’s Sheikh Jarrah neighborhood by 6:00 p.m., it would fire rockets at the Israeli capital.

Hamas soon followed through on its threat, putting coalition talks on hold, though Lapid has 22 more days to put a government together.

Whatever the outcome, it is evident that Israel’s political leadership is undergoing deep and intense changes. The biggest change, of course, is the imminent removal of Netanyahu from the prime minister’s office after 12 consecutive years in power. Another important change is that the new government will not include the ultra-Orthodox parties, who wielded enormous power in most of Netanyahu’s coalitions.

The third and no less historic change would be the active participation of an Arab party in the coalition. Lapid and Bennett were scheduled to meet with Ra’am chair Mansour Abbas yesterday afternoon to finalize the agreement. They had already acquiesced to all of his demands, making the new government a near certainty. Shortly before the meeting, however, Abbas announced that talks would be postponed because of the events in Gaza and Jerusalem. Sources speaking on behalf of Lapid and Bennett said that it was just a tactical delay: On such a troubling day for the Palestinian people, it would be difficult for Abbas to be the first party leader to join their coalition.

Bennett and Lapid had already agreed that Bennett would be first to serve as prime minister in the rotation agreement. He would be followed by Lapid, who would serve until then as foreign minister, deputy prime minister and alternate prime minister.

For finance minister they chose the head of Yisrael Beitenu, Avigdor Liberman. Benny Gantz, the head of the Blue and White Party, would remain defense minister, while the justice minister would be Gideon Saar of New Hope.

Other first-time ministers include Labor's Omer Bar Lev, who is headed for the Ministry of Internal Security, and Knesset member Tamar Zandberg of Meretz, the nominee for minister of the environment. Other ministers from Yesh Atid include Maj. Gen. (ret.) Orna Barbivai, who is headed to the Ministry of Welfare, Karin Elharrar, who will be minister of communications, and Yesh Atid Knesset member Ram Ben Barak, a former deputy director of the Mossad, who will be minister of agriculture. The new minister of religious affairs is expected to be Matan Kahane of Yamina, a former fighter pilot. This particular ministry has been dominated by the ultra-Orthodox parties, particularly Shas, for the past decade.

The proposed security cabinet offers further insight into how significant the change of government will be. For years, Netanyahu had almost exclusive control over this prestigious forum. He had very clear policies regarding major security and diplomatic issues, including ending negotiations with the Palestinians and opposition to the nuclear agreement with Iran.

If the change government comes together, Bennett and Lapid will both have veto power over any decisions. Other members of the security cabinet are expected to include Bar Lev, Saar, Liberman, Barbivai, Yifat Shasha-Biton of the New Hope party (who will also be minister of education), Yamina's Ayelet Shaked (who is slated to be minister of the interior) and Ben Barak.

The make-up of the security cabinet is still taking shape. Nevertheless, the snapshot is of a group significantly different from cabinets created around Netanyahu’s worldview. Lapid and the leftist parties want to see the revival of the Iran nuclear agreement under certain conditions, closer ties with the US government and obviously, a renewal of negotiations with the Palestinians.

Bennett and the other ministers on the right are expected to align themselves with these goals. According to the emerging coalition agreement, the new government will not promote controversial legislation so as to ensure that the coalition does not collapse. However, it will have no choice but to take action on security and diplomatic affairs, because major events do not stop happening. The front with Gaza is heating up while a renewed nuclear agreement is already taking shape.

Even if this new government isn’t sworn in, it will show what the country’s political leadership will look like over the coming years.