As Yair Lapid takes the wheel, the coalition negotiations to create a broad-based government have been underway for weeks. 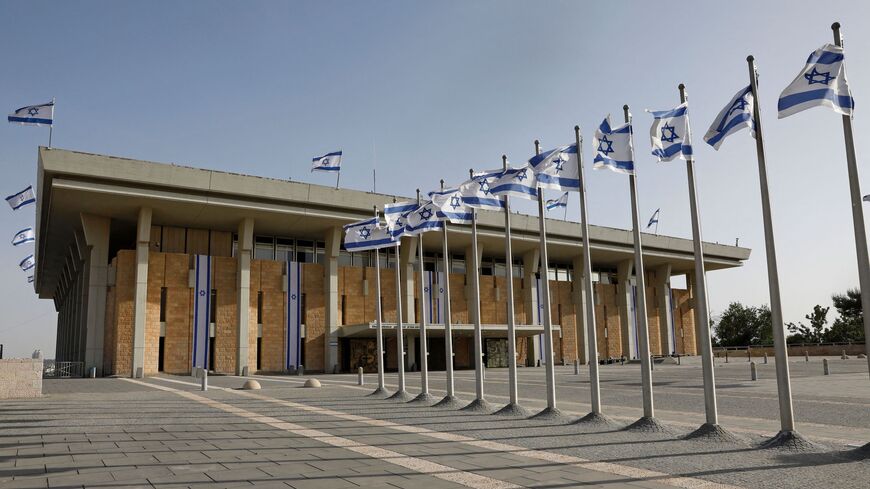 A general view shows Israeli flags fluttering outside the Knesset headquarters in Jerusalem on May 4, 2021. - GIL COHEN-MAGEN/AFP via Getty Images

“I welcome the president’s speed in making the right decision by handing the mandate to Yair Lapid. It is now up to us, the party leaders in the bloc of change. As one well acquainted with their positions, I can reassure Israelis that a stable government can be presented as soon as next week,” Liberman tweeted. He ended his message with the immortal exhortation of Benjamin Herzl, the visionary founder of modern-day Zionism, “If you will it, it is no dream.”

Liberman was instrumental in formulating and guiding Lapid’s strategy prior to the March 2021 elections and since then. He knows what drives his fellow party leaders in the bloc who share one overriding goal: removing Prime Minister Benjamin Netanyahu from office. To that end, they are willing to entertain far-reaching ideological and personal concessions.

If a new government is formed in the coming weeks, Liberman will undoubtedly be credited with being one of its earliest architects in the days when such an outcome appeared all but impossible.

Liberman is expected to be named finance minister, but unseating Netanyahu will be a far more significant victory. He launched his campaign in May 2019, stunning the Netanyahu-led right-wing bloc by pulling out and sabotaging Netanyahu’s efforts to form a government following the April 2019 elections.

Liberman must have believed that the Netanyahu era was about to end, but such assessments were premature. It would take three additional elections for Israel’s longest-serving prime minister to be forced to concede defeat — for now. Having failed to cobble together a government, Netanyahu handed back the baton Rivlin gave him 28 days previously.

Others played instrumental roles in blocking Netanyahu’s path to a Knesset majority, chief among them Yamina leader Naftali Bennett, the right-wing ideologue who joined the Netanyahu removal project and without whom it could not have materialized. In return, Bennett will likely be made prime minister in a power-sharing deal with Lapid.

Former Likud stalwart Gideon Saar also played a key role in this outcome, for which he can expect to be rewarded with the Justice Ministry.

If Liberman's prediction is correct, Israel will enter the post-Netanyahu era very soon and the Likud will find itself warming the Knesset's opposition benches.

Immediately after Rivlin announced his decision, the change bloc's negotiations intensified, all the participants aware of the ticking clock and mindful of Netanyahu’s determination to stop their endeavors. The bloc will have 28 days to present a government. If it fails, a fifth election is almost inevitable.

Lapid is well aware of the stakes. “The unity government is not a compromise; it is a goal. A government that reflects the fact that we do not hate each other. Where right, left and center work together to address economic and security challenges,” he said.

The coalition negotiations on a broad-based government have been underway for weeks. Initial drafts of its founding principles and proposed appointments are already on the table. Lapid is expected to serve as prime minister in the second half of the government’s term even though his party is much larger than Bennett’s. His concession was vital to roping in Bennett and obtaining the needed majority to remove Netanyahu from office and end the election cycle.

Meanwhile, Netanyahu is doing all he can to sow discord within Bennett’s party to shake the resolve of some of its seven Knesset members. He has scored at least one success with freshman Knesset member Amichai Chikli, who informed Bennett this week that he would vote against a government of change because it would violate Yamina’s pledge not to serve under Lapid and also rely on Arab parties.

Netanyahu accused Bennett of joining a “dangerous left-wing government,” calling the move as a “fatal combination of lack of direction, lack of ability and lack of responsibility.” He argued that with left-wing Meretz in the government, Israel would not be able to defend its soldiers against war crimes charges in the International Criminal Court. Netanyahu reminded listeners that Meretz chair Nitzan Horowitz had expressed support for the ICC decision to investigate Israel for alleged war crimes and said that Lapid would also be unable to fight the impending US return to the nuclear agreement with Iran, recalling how Lapid had attacked him when he appeared before Congress in 2015 in a bid to undermine the deal.

“With [Labor leader] Merav Michaeli, would our children be educated? She called for not sending them to the IDF,” Netanyahu argued.

All those he mentioned are likely to serve as ministers in the new government. Michaeli and Horowitz, who Netanyahu and his allies revile as dangerous leftists, could be appointed ministers of the interior or education as well as members of the security cabinet.

The bloc of change is treading a rocky road. The glue that holds its members together, some of them bitter personal or ideological rivals, is the removal of one man. Their success relies on the direct or indirect support of Arab political parties. It will have a precarious Knesset majority, at best. Netanyahu and his 29 Likud members will form a powerful opposition with the support of 22 Knesset members from the ultra-Orthodox and ultra-right Religious Zionism party, all mobilized to catapult him back to the prime minister’s office.