Now that President Reuven Rivlin tasked Yair Lapid with forming the next government, the head of Yesh Atid party has 28 days for the complicated mission. 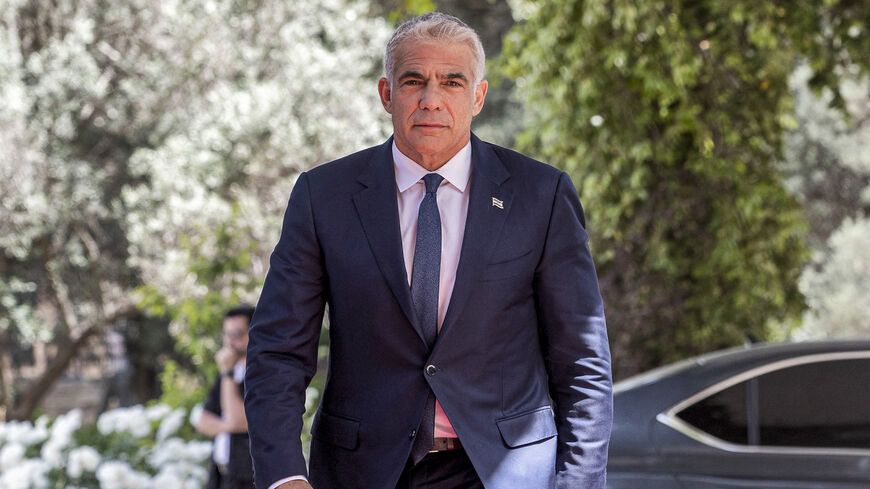 Yair Lapid, leader of Yesh Atid, arrives at the Israeli president's residence in Jerusalem on May 5, 2021. - OREN BEN HAKOON/AFP via Getty Images

President Reuven Rivlin tasked Yesh Atid leader Yair Lapid today with the mission of composing the next government. Rivlin made his decision after Prime Minister Benjamin Netanyahu failed to compose a majority coalition by the deadline given to him four weeks ago — last night at midnight — and after consulting with heads of the different parties this morning. Speaking in front of the cameras from his official residence in Jerusalem, Rivlin noted that Lapid had secured the recommendations of 56 Knesset members, against seven legislators who recommended Yamina leader Naftali Bennett.

“On the basis of the recommendations I received,” said Rivlin, "I spoke just now with Knesset member Yair Lapid and informed him I am tasking him with the mandate to form a government, whether this is a government that he initially leads, or a government led first by another candidate and in which he initially serves as alternate prime minister."

Lapid was recommended by members of his own Yesh Atid and by members of New Hope, Blue and White, Yisrael Beitenu, Meretz and Labor. Five members of the Joint List also recommended him, while representatives of the Balad faction within the Joint List recommended no one. Similarly, the chair of Raam, Mansour Abbas, did not recommend any candidate. Bennett received the support of only his own party members. All the other parties asked that the mission will be handed over to the Knesset.

The president explained why he preferred to grant Lapid the mission rather than give the Knesset the task of proposing its own candidate, saying that sending the mandate to the Knesset at this stage “transgresses against the law and is likely to lead to fifth elections without exhausting all the opportunities for forming a government.”

After the announcement, Lapid tweeted, “Today the president offered me the mandate to try to establish a unity government in Israel. After two years of ongoing political nightmare, Israeli society is wounded. The unity government is not a compromise, it is a goal. A government that reflects the fact that we do not hate each other. Where right, left and center work together to address economic and security challenges. We need a government that will prove to us that being different from each other is not a weakness, but a source of Israel's power. I will do everything to see the unity government is established as quickly as possible and starts working for the citizens of Israel.”

"He spoke about a unity government. This is clearly an attempt to mislead the public. Everyone knows that he wants to form a dangerous left-wing government. With [Meretz leader Nitzan] Horowitz, could IDF soldiers be protected from lawsuits in the International Criminal Court? Would Lapid fight the nuclear agreement? After all, he attacked me when I went to fight against the dangerous agreement. With [Labor leader] Merav Michaeli, would our children be educated? She called for not sending them to the IDF."

Lapid has now 28 days to compose a majority-backed government. If he fails, the mission will be handed over to the Knesset for a period of 21 days. After that, if no candidate can present a majority, new elections will be announced.

By Lapid’s own admission, he would accept a unity government in which Bennett serves first as prime minister in a rotation agreement. Still, it is not at all certain that such an agreement will receive the support of at least 61 Knesset members, as Arab legislators have pledged not to back a Bennett-led cabinet.

Following the president tasking Lapid with the mandate, Yesh Atid Knesset member Karin Elharar has been appointed as chairman of the Knesset arrangements committee, which control’s the agenda of the parliament. Elharar will replace the Likud’s Miki Zohar, who headed the committee under Netanyahu's mandate.