Minutes before his mandate expired, Yesh Atid leader Yair Lapid announced that he had called President Reuven Rivlin to tell him that Lapid had signed agreements providing the support needed to form a government that will oust Benjamin Netanyahu from power. 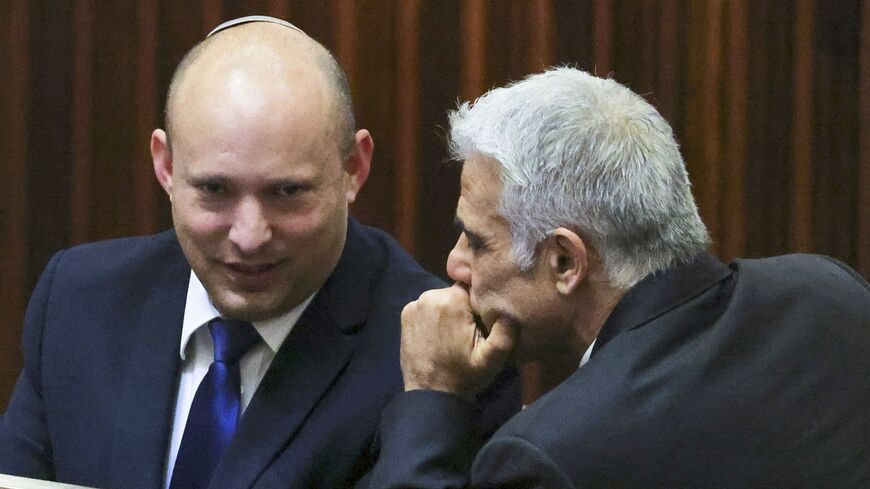 Israel's Yamina party leader Naftali Bennett (L) smiles as he speaks with Yesh Atid party leader Yair Lapid during a special session of the Knesset that elected Isaac Herzog as president, in Jerusalem on June 2, 2021. Lapid later told outgoing President Reuven Rivlin that he, Bennett and other Knesset members had come up with the votes to form a new government. Bennett and then Lapid are to rotate in the prime minister's post. - RONEN ZVULUN/POOL/AFP via Getty Images

Yesh Atid party leader Yair Lapid told President Reuven Rivlin late Wednesday that Lapid had managed to cobble together a majority-backed government. Final agreements for the establishment of the new government were reached about an hour before the midnight deadline.

Lapid tweeted, “I just notified Israel’s President Reuven Rivlin that I succeeded in the mission of assembling a government. I pledge that this government will work at the service of all Israeli citizens — those who voted for it and those who did not. It will respect its opponents and will do whatever it can to unite and reconnect all parts of Israeli society.’’

Lapid had been tasked by the president with assembling a coalition and a government 28 days before, right after Prime Minister Benjamin Netanyahu admitted he had failed to accomplish the mission. Had Lapid failed, the mandate would have gone to the Knesset, where any member could have tried to garner the required majority. If that had also failed, Israel would have had to go to its fifth round of elections in 2½ years.

Coalition talks accelerated May 30 when Yamina party leader Naftali Bennett announced his intention to join Lapid to create a government of change that would oust Netanyahu. Bennett argued that after four election rounds and with the Likud's Netanyahu failing to establish a majority in the 120-seat Knesset, there was no feasibility for a right-wing government. “There is someone telling us that a right-wing government is just around the corner, and we [Yamina] are the ones who are preventing its formation. That is a complete lie. After four elections and two additional months we have all seen that there just will not be a right-wing government headed by Netanyahu,” Bennett said in his televised address.

Still, even after Bennett’s announcement, several obstacles stood in the way of Lapid garnering the required majority. For instance, Yamina’s No. 2, Ayelet Shaked, slated for the Interior Ministry, demanded to be nominated for the country’s judicial panel (for selecting Israel’s judges), a position that Labor chair Merav Michaeli, slated for the transportation portfolio, was also vying for. Eventually, Shaked and Michaeli agreed to rotate on the judicial panel post, with Shaked going first.

Yamina was the last partner to sign an agreement with Lapid, after Gideon Saar’s right-wing New Hope party and the Islamic party Raam inked agreements for supporting the new coalition. The Yamina-Yesh Atid deal stipulates that Bennett will serve as prime minister for the first two years, with Lapid taking over the premiership for the last two years of the term. In the first two years, Lapid will serve as alternate prime minister and as foreign minister.

Ministerial portfolios will be divided between Yesh Atid, Yamina, Labor, Meretz, Blue and White, New Hope and Yisrael Beitenu. Raam will not sit in the government, but will support it from the outside. Instead, Yesh Atid agreed to regularize the status of several unrecognized Bedouin villages in the Negev, to suspend the Kaminitz law on construction violations in the Arab sector and to advance development budgets and programs for Arab towns and villages.

The swearing-in of the new government is expected in 12 days.