Yamina leader Naftali Bennett announced yesterday that he intends to join Yesh Atid leader Yair Lapid to form a government of change that will end the yearslong rule of Prime Minister Benjamin Netanyahu. 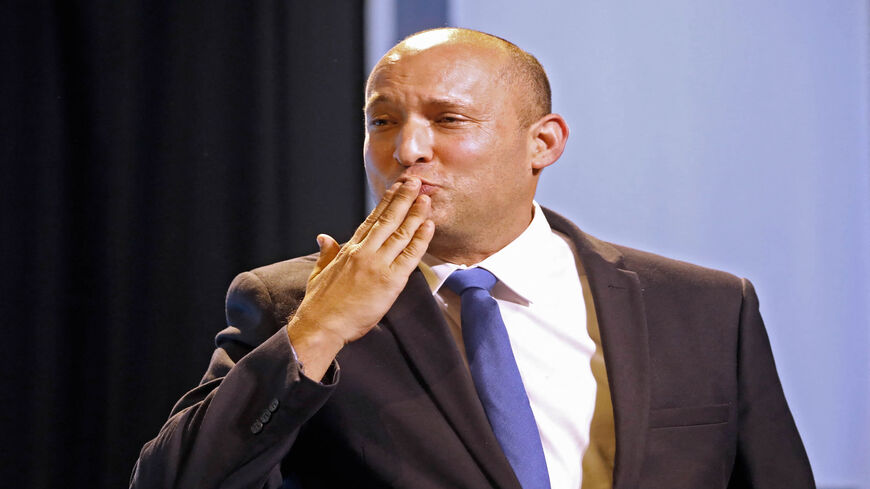 Naftali Bennett, leader of the Israeli right-wing Yamina party, blows kisses as he greets supporters at his party's campaign headquarters after the end of voting in the fourth national election in two years, Tel Aviv, Israel, March 24, 2021. - Gil Cohen-Magen/AFP via Getty Images

Capping weeks of speculations and rumors, Yamina leader Naftali Bennett announced yesterday in a televised address that he intends to join Yesh Atid leader Yair Lapid to form a coalition. If indeed established, such a coalition would end more than two years of political deadlock, ousting Prime Minister Benjamin Netanyahu after 12 consecutive years in power.

“The elections have proven there is no right-wing government under Netanyahu. There is unity or fifth elections. Netanyahu knows it well,” said Bennett. He then warned that the four election campaigns Israel has gone through in the past two years had caused the country to lose its ability to function. The country's leadership is "showing hate and divisions to cover up failures," he noted.

Addressing supporters of the right, Bennett said, “There is someone telling us that a right-wing government is just around the corner, and we [Yamina] are the ones who are preventing its formation. That is a complete lie. After four elections and two additional months we have all seen that there just will not be a right-wing government headed by Netanyahu.”

Bennett added, “At such a crucial moment responsibility must be taken. Therefore I am announcing today that I intend to act with all my strength to form a national unity government together with my friend Yair Lapid, so that, God willing, together we will rescue the country from this tailspin — and we will get Israel back on track. Yair and I disagree on a number of issues of substance. But we are partners in our love for the country and willingness to work for the sake of the country.”

Responding to Bennett’s announcement, Netanyahu accused him of committing “the fraud of the century,” claiming that he had made “incredible” offers to Bennett’s party that would have prevented an alleged left-wing government. Netanyahu then said Bennett had refused all his offers, and that Bennett “only cares about himself.” “No one would have voted for you if they knew what you would do,” Netanyahu added.

Negotiating teams from Yamina, Yesh Atid, Gideon Saar’s New Hope and Benny Gantz’ Blue and White parties met last night, after Bennett’s announcement, to discuss terms for the formation of a new government. A team representing Avigdor Liberman’s Yisrael Beitenu was reportedly also involved in the talks overnight. Lapid has until midnight on Wednesday to present President Reuven Rivlin a majority-backed government. If he fails, the president is expected to hand over the mandate to the Knesset, which could present its own majority-backed candidate for the mission. Should that option fail, the Knesset will be dispersed and Israel would head to fifth elections.

After the announcement of Bennett, supporters of Netanyahu demonstrated yesterday outside the Tel Aviv home of Ayelet Shaked, who is No. 2 on the Yamina party list. Shaked had reportedly objected in recent days entering into a government with left-wing parties.