With Yesh Atid leader Yair Lapid on vacation in the United States, and Yamina leader Naftali Bennett changing course, Prime Minister Benjamin Netanyahu has the upper hand against the "bloc for change." 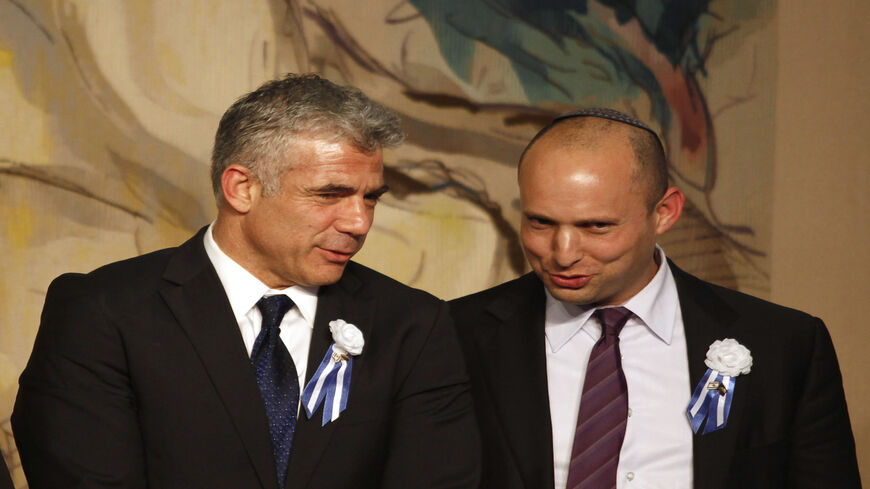 The evening of April 7 marked the solemn beginning of Holocaust Memorial Day in Israel. That night, Yesh Atid leader Yair Lapid boarded a flight to the United States for what his team called a weeklong vacation.

Lapid is also opposition chair, thus a national symbol of governance. His decision to leave the country on one of Israel’s most sacred memorial days raised more than a few eyebrows. He was criticized for it. The occasion offered him an opportunity to trot from one memorial to the next and stand alongside the prime minister, the president and the chief justice to address the nation from the nation’s most prominent platforms. Instead, he disappeared from the public eye.

What makes the timing of his trip even more bizarre is that just one day earlier, on April 6, President Reuven Rivlin tasked Prime Minister Benjamin Netanyahu with forming a new government. The president had no choice. Despite his visible reluctance, Rivlin gave Netanyahu 28 days to form a new government. Now, as long as he has that mandate, Netanyahu will continue to control the Knesset and all of its committees.

But Netanyahu doesn’t have a new government in his pocket — far from it. As such, Lapid, the head of the second-largest party in the Knesset and leader of the center-left “bloc for change,” would have been expected to take advantage of the coming days to try to cobble together an alternative to anything Netanyahu might piece together. Instead, he seems to have abandoned the arena. Analyzing his moves, Lapid seems to be preparing himself for a dreaded fifth election.

In the meantime, Netanyahu is going above and beyond in his effort to form a new government. He even invited his mortal enemy Yamina leader Naftali Bennett to his home in Balfour Street for talks. What Netanyahu knows above all else is that neither side will have a government without Bennett.

What made that invitation all the more symbolic was that Bennett has been feuding with Netanyahu’s wife Sara for many years. In fact, he has never visited the official residence in the 12 years that Netanyahu has been in office. Even when Bennett served as minister in various Netanyahu governments, the premier avoided meeting him in his home. It now looks like the ban against Bennett has finally been lifted. The moment he entered the “Forbidden City” was a momentous occasion.

Bennett was supposedly the key figure in what became known as the “bloc for change.” Even though he only won seven seats in the last election, Lapid was prepared to give him everything and then some, including a chance to serve first as prime minister in a rotation government, provided this meant that Netanyahu would be purged from the political arena. Even the ideological left-wing party Meretz said that they would be willing to “plug their noses” and support him. As a result, Netanyahu was convinced that this time, he would have a hard time avoiding a concerted effort to fast-track him out of the prime minister’s office. He believed that the entire bloc for change would coalesce against him and recommend Bennett or Lapid instead. One of them would then be tasked with forming the next government.

But the change bloc failed to push the knife in deep enough. Actually, they did the exact opposite, and a strange calm came over them. During the Passover holiday, Bennett decided to spend a few days hiking in the desert with his son, giving Lapid the impression that he was just drawing things out. It was hard to get through to Bennett by phone, so the two men never sequestered themselves together in some remote room until white smoke came pouring out of the chimney. As time passed, the momentum they had right after the election slowly began to fade away.

This left New Hope party leader Gideon Saar as a major player in the struggle to form a coalition. For Saar, a former Likud senior, the idea of cooperating with Bennett and with center and left parties to topple Netanyahu was surely not a simple one. Still, he went along with this, only to discover he did not really have committed partners for the endeavor.

Controlling only six seats, Saar realized that he would not be prime minister anytime soon. Nevertheless, he was willing to offer his services to Bennett and do what he can to ensure that Bennett would be the first person to serve as prime minister, if there was a rotation agreement.

But the days slipped away. On April 5, the drama reached its climax as party representatives made their way to President’s House to recommend their candidate for prime minister. Netanyahu had a stable bloc of 52 members of Knesset, who supported him. They represented the Likud, the ultra-Orthodox parties and the far-right Religious Zionist party. In contrast, the bloc for change fell apart. Some of its members recommended Lapid, Bennett recommended himself, and Saar and the Arab parties refused to recommend anyone. Rivlin had no choice but to hand the mandate over to Netanyahu, who had the most support. The president even made a show of expressing how upset he was. He named his candidate through an intermediary, just so that he would not have to meet with Netanyahu face to face.

It was a devastating blow to the bloc for change. The euphoria felt by the bloc’s leaders right after the March 23 election gave way to a sense of failure. Recriminations were forthcoming. People close to Saar attacked Bennett and Lapid for failing to show grit and determination. Bennett’s desert hike with his son became the subject of particular derision.

Then on April 6, amid all this chaos, Bennett appeared in the Knesset and released a statement to the cameras, signaling to Lapid that he got cold feet. “I don’t know many politicians who had a chance to be prime minister and didn’t pounce on it,” he said in a particularly impassioned tone. For analysts, Bennett was signaling that he was willing to give up the option of premiership in a rotation government with Lapid, for the sake of a Netanyahu-led right-wing coalition.

Bennett didn’t quite slam the door on Lapid, but it was obvious that the momentum for change was lost. Bennett was giving Netanyahu a chance, but if the prime minister failed, Bennett could just as easily switch sides again and work to establish a new government with himself as prime minister.

The camp advocating change saw its lofty plans come crashing down around it. According to assessments, Netanyahu will have a hard time cobbling up a majority coalition. Thus, the scent of fifth elections has already popped up in the air. Once a fifth round was up for discussion yet again, all the key players began to stake out their positions. Until then, for example, several members of the Arab Joint List considered plugging their noses and accepting Bennett, a right-wing advocate of annexation, as the next premier, provided that it meant removing Netanyahu. Now they made a sharp U-turn. On April 8, Joint List leader Ayman Odeh said they would not support Bennett, or as he put it, “We will not replace one racist [Netanyahu] with another [Bennett].”

So far, few details have leaked about the April 7 meeting between Netanyahu and Bennett. What is, however, clear is that Netanyahu will not give up without a fight. He will be the perfect suitor for the next few weeks, promising Bennett the world and the stars to lure him into his net. And if that doesn’t work, he will do everything he can to sabotage a Bennett government.

In politics, timing is everything. It looks like Netanyahu understands that better than any of his rivals.