Whatever it ends up looking like, it's clear that the next Israeli government won’t pursue negotiations with the Palestinians. 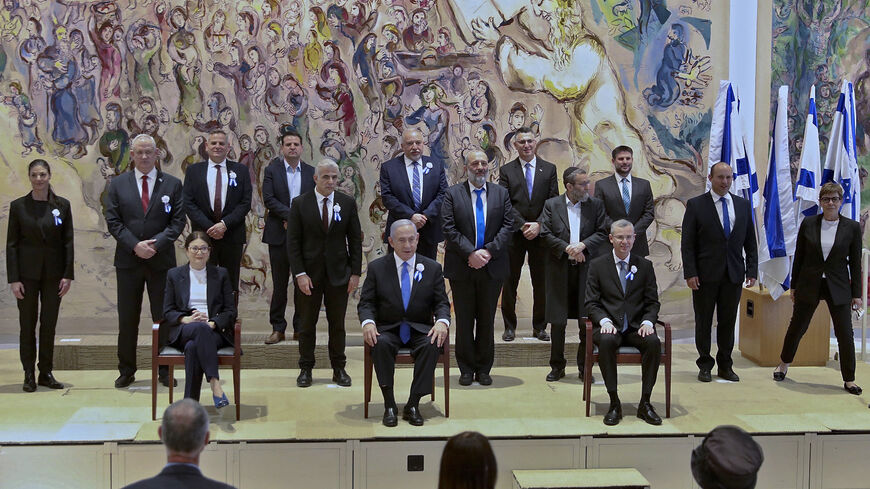 It’s been three weeks since the March 23 election and Israelis are still waiting to find out who will lead the next government, what parties will make up the new coalition and even if a coalition can be formed.

And yet despite all the open questions, the fate of negotiations with the Palestinians is becoming increasingly clear. It can already be assumed that the diplomatic deadlock will continue. In each of three likely possibilities, the next prime minister will be a candidate from the right, with a right-wing worldview and a strong commitment to the settlers.

In one of the three possibilities, Benjamin Netanyahu will remain prime minister. He may succeed in his efforts to form a right-ultra-Orthodox coalition with outside support from the Ra’am party.

In the second possibility, Israel will have a fifth round of elections, and Netanyahu will remain in office as head of a transitional government. Should that happen, he will remain committed to his role as leader of the right.

There is a third possibility, in which Netanyahu fails to put together a government and the mandate passes to the so-called bloc for change. One main condition for such a government is that it will be led by the head of Yamina, Knesset member Naftali Bennett. Such a coalition would be made up of parties from the center and the left. It will also need the outside support of Arab Knesset members. Nevertheless, it will be unable to push a diplomatic solution with the Palestinians based on a two-state solution.

Bennett once served as head of the Yesha Council, the umbrella organization for the West Bank settlements, and is considered further right than Netanyahu. He believes that annexation of the occupied territories is vital to the future of the State of Israel.

The future of negotiations between Israel and the Palestinians looks dire. Talks ground to a halt in April 2014 and haven’t been renewed since. There is a serious rift between the two parties to the dispute that only got worse during US President Donald Trump’s administration. Not only was the president sympathetic to the settlement movement, he also moved the US Embassy from Tel Aviv to Jerusalem, recognized Israel’s annexation of the Golan Heights and alienated the Palestinians.

While Trump’s replacement, President Joe Biden, believes in a two-state solution, it seems that political circumstances in Israel will not allow that to happen.

In his Bar-Ilan speech of 2009, Netanyahu first spoke openly about Palestinian statehood. His views have shifted considerably since then. Today, Netanyahu is entirely dependent on the extreme right. There is no way he can politically survive without its support.

Then there is Bennett. The center-left might very well be willing to swallow its pride and accept him as prime minister, even though his party has just seven Knesset seats. It would still serve the ultimate goal of removing Netanyahu from office. But a Bennett government would do nothing to advance a diplomatic solution to the Palestinian issue.

In Bennett's speech to mark the swearing-in of the 24th Knesset — and after the president tasked Netanyahu with forming the next government — he said, “What is right for Israel at this moment is the formation of a stable government that would spare the country from a fifth round of elections. This would be a government that abides by the national consensus. What the people want now is a stable, nationalist government led by the right.’’

Bennett continued, “There are some people who call themselves right-wing and who want to drag the country into a fifth round of elections. They are like the Zealots, who burned the food supplies during the Second Temple period [in order to expedite the revolt against Rome]. Then there are those with opposing views, who think that we should abandon our nationalist positions for the sake of forming a leftist government, ostensibly headed by me. I don’t know many politicians who could have been prime minister and didn’t pounce on the opportunity. But I will not give up my values. I will not head a government whose very essence is leftist.”

Though he left the possibility of serving as prime minister in a government including center-left parties open, Bennett made it perfectly clear that he would not be willing to compromise on diplomatic issues, and that if he headed the new government, he would insist on being first in a rotation agreement before Yesh Atid chair Yair Lapid, who heads the second-largest party in the Knesset.

Any coalition agreement to form a government that includes Meretz and the Labor Party, but also Gideon Saar’s far-right New Hope Party, will not include negotiations with the Palestinians based on a two-state solution.

Bennett has obligations to the settlers. His is a faith-based religious electorate, and it reflects his own worldview. Similarly, the other members of his party are also right-wing ideologues.

Take, for example, his number two, former Justice Minister Ayelet Shaked. Even now, despite the possibility that she will be part of a coalition that includes parties from the left, she is making no effort to tone down her positions. Right before the new Knesset was sworn in, she proposed a series of new laws to advance this agenda. In a celebratory tweet to her followers, she wrote, “Even before the 24th Knesset was sworn in, I signed a series of proposed laws together with the other members of our party. These included annexation [and] legislation to overrule Supreme Court decisions.”

Her mention overruling the Supreme Court referred to a bill intended to restrict the power of the entire legal system, which some consider leftist. And of course, annexation means making the settlements part of Israel’s sovereign territory. These two proposals are the essence of a right-wing political agenda and diametrically opposed to everything that the left believes.

Nevertheless, there are many on the left who also believe that removing Netanyahu from office is their foremost priority, even over their own worldview, at least temporarily.

Maj. Gen. (ret.) Yair Golan, who now serves as a Knesset member for Meretz, believes that gridlock in negotiations with the Palestinians is a disaster that will have devastating and far-reaching consequences. Although he is a vocal advocate of the two-state solution, he has said that he would be willing to grit his teeth and sit in a government headed by Bennett, provided that it would remove Netanyahu from power.

Golan made it clear that he would not accept annexation or any laws to override Supreme Court rulings as part of a coalition agreement, and that a precondition for forming a Bennett coalition is omitting these two ideas from its founding principles. Still, it would mean that negotiations with the Palestinians would remain in their current state of paralysis.

This approach could be devastating to Israel’s political left. If he is removed from power, Netanyahu will head the opposition, making Bennett’s life miserable with all sorts of proposed laws to annex the territories and make the left’s position in such a government intolerable.