The decision by the Jewish National Fund to start purchasing land in the West Bank marks another victory for the right-wing and the settlement movement. 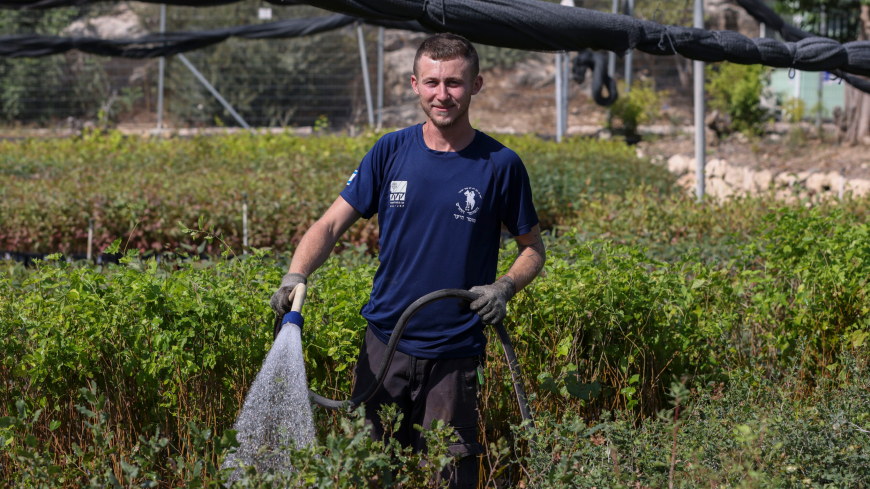 Israeli Medan Press, 22, who lost his job in a factory due to the economic crisis caused by the COVID-19 pandemic, works at his new job in the Jewish National Fund nursery in the Eshtaol area near the Israeli city of Beit Shemesh. The nursery provides trees and shrubs suited for Israel's central region.

“It’s quite possible that, until two days ago, [President Joe] Biden had no idea what the Jewish National Fund is. Now, however, the old, established organization has turned itself into a major nuisance for his presidential agenda.” With this sarcastic note, Alon Pinkas, the former Israeli consul general in New York, concluded an article he wrote for the Israeli newspaper Haaretz that was published Feb. 14.

His remarks referred to a dramatic decision made by the group, which was created in 1901 with the mission of purchasing lands for Jews to settle in Ottoman Palestine. Over the years, and after the establishment of the state of Israel, it continued to purchase land throughout the country for Jewish settlement (as opposed to West Bank settlements). Today, the Jewish National Fund owns 15% of all the land in Israel. Throughout its history, the fund raised money from rich Jewish donors across the Diaspora, who regarded its mission as a worthy act necessary to “redeem” the Land of Israel.

Once the State of Israel was created, the Jewish National Fund became a powerful arm of the ruling center-left Mapai party (later Labor) and an icon for parties on the Israeli left. As right-wing rule became increasingly entrenched over the last decade, the fund turned into a major arena for political and ideological clashes between the two conflicting worldviews. Representatives of the right in the group’s governing bodies gained more and more control over the organization, with the goal of taking everything the fund had done until then far beneath the radar (through a subsidiary company) into official Jewish National Fund policy. As of this month, it has become an organization devoted to the advancement of Jewish settlement in the West Bank.

This dramatic shift culminated with a formal decision made Feb. 14 by the fund’s executive board. It changed the group’s official policy and reorganized its activity in the West Bank. This included expanding efforts to purchase land there for the purpose of Jewish settlement.

According to these changes, the fund would purchase private land as part of its “redemption of the land” policy, with a preference given to properties in major areas of Jewish settlement: Gush Etzion, the Jordan Valley, the area surrounding Jerusalem, the Benjamin region, southern Mount Hebron and along Highway 5 and the Green Line.

This is an enormous victory for the settlers. From now on, they have a steady foothold in the “Holy of Holies” of historic Jewish settlement in the Land of Israel. The ultimate symbol of pioneering and building up the country and of the left’s past glory has been turned into an executive arm of the settler movement. The decision revealed what everyone already knew: The Jewish National Fund (JNF) had turned into a right-wing, pro-settler organization.

Inevitably, the decision was celebrated by the leaders of the settler movement and their representatives in the Knesset. The head of the Religious Zionism party, Bezalel Smotrich, tweeted, “Excellent! This was one of our demands in the coalition agreements for national institutions. Finally, the JNF is back to its old self, focusing on its historic role: redeeming the Land of Israel for Jewish settlement. This is Zionism 2021.”

How does this impact Biden? While his official foreign policy does not seem to prioritize diplomatic negotiations with the Palestinians, the White House cannot ignore this rather “esoteric” decision made in some remote corner of the Middle East by an antiquated, archaic organization. Why? Because the decision itself is harmful to any efforts to reach a “two-state solution,” which is part of the overall vision for the region, as expressed by Biden and his new administration. Whether the president agrees or not, the Jewish National Fund decision has become his headache.

And his administration responded accordingly. Even before the provocative decision was finalized and formalized, the State Department issued formal criticism of the move. State Department spokesman Ned Price said, “We believe it is critical to refrain from unilateral steps that exacerbate tensions and that undercut efforts to advance a negotiated two-state solution.” He said such steps could include the “annexation of territory, settlement activity, demolitions, incitement to violence [and] the provision of compensation for individuals in prison for acts of terrorism.”

Reform Jews in the United States, who have a representative on the Jewish National Fund board, also tried to block the initiative before it was formally approved. A statement released in the name of the Union for Reform Judaism leader, Rabbi Rick Jacobs, said his movement opposes the expansion of the settlements because it puts the possibility of a two-state solution at risk. “We love and support the Jewish and democratic State of Israel which is why we will continue to strongly oppose policies that undermine the safety, security and moral character of our Jewish homeland.”

Jacobs made it perfectly clear that the Reform movement does not intend to stand idly by. It plans to pursue different political and legal channels, and to recruit the Jewish community to fight this decision. He added that the timing of the decision, just after Biden entered office, could pose a risk to the good relationships Biden is trying to build.

Defense Minister Benny Gantz also tried to block the decision. He appealed to fund Chairman Avraham Duvdevani (who is identified with the right-wing and religious Zionist camps) in a letter, saying the decision was “especially sensitive” and that its impact should be considered “because it could have international implications in terms of the relationship between Israel and the Biden Administration and between Israel and the Diaspora.”

But, as seen, the pressure and condemnations had no impact. The decision was made. If Benjamin Netanyahu really wanted to stop it, he could have done so easily, but that’s the last thing the prime minister would do one month before an election when he so desperately needs every vote on the right. At the same time, Netanyahu is also signaling to Biden that despite the chilly reception he seems to be receiving from the White House, he does not intend to bend, certainly not now, after the International Criminal Court in the Hague ruled that it would allow an investigation into Israel’s activities in the West Bank. Politically, the Jewish National Fund decision actually serves Netanyahu’s interests as leader of the right.

Another person alarmed by the decision but unable to stop it is Rabbi Gilad Kariv, a representative of the Reform movement on the Board of the World Zionist Organization and a Labor party candidate for the Knesset. “This is a significant threat to our national institutions in general and the Jewish National Fund in particular,” he said. “The far right is continuing its incessant efforts to establish facts on the ground, which will impede any progress on the diplomatic front.”

Meretz party chair Nitzan Horowitz also recognized the ominous nature of the decision. “The right is turning the Jewish National Fund into the Settlement National Fund. The JNF is not some company charged with destroying a potential political solution and any chance for peace that comes with it,” he tweeted.

The problem is that political circumstances are not acting in the interest of anyone opposed to the decision. All polls show that the center-left parties will suffer a thrashing in the upcoming election and that their representation in the Knesset will hit another low.