With UN Security Council Resolution 2334, Israeli Prime Minister Benjamin Netanyahu not only faces criticism from the center-left, but also calls from the right to annex West Bank lands. 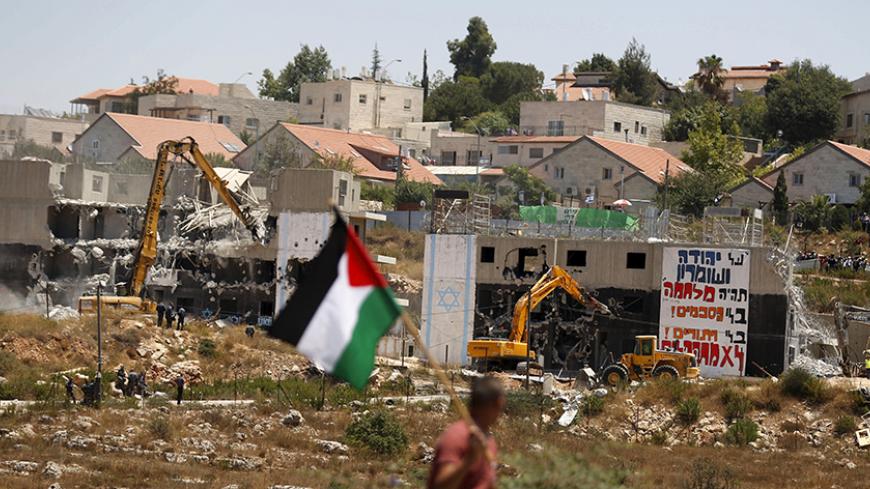 At a major press conference Dec. 6, leaders of the Zionist Camp launched an expensive new campaign intended to re-establish its relevancy as the main opposition party. They dubbed the campaign Netanyahu’s Hidden Tax Fraud. The decision to launch an economic campaign instead of refining the party’s diplomatic positions reflects the mood among Israel’s center-left over the past few years and the tendency to minimize any talk of a two-state solution and the painful concessions such an outcome would entail.

This approach grew during the 2013 elections. Shelly Yachimovich, then the chair of the Labor Party, the main party in the Zionist Camp, not only ignored the diplomatic principles that had always been at the forefront of her party’s platform, she even tried to appeal to the settlers in an (unpopular and unsuccessful) effort to expand the party’s voter base. Yair Lapid, the chairman of the centrist Yesh Atid, took a similar approach by focusing his election campaign on the socio-economic issues that have topped the public’s agenda since the social protests that coalesced in summer 2011. Even Naftali Bennett, the chair of the national-religious HaBayit HaYehudi, adopted a similar strategy and embraced the social protests.

The trend continued. After suffering a crushing defeat in the 2015 elections, the center-left lost any confidence it might otherwise have had to offer a political alternative to Benjamin Netanyahu’s government. This became all the more apparent after the individual intifada erupted that same year. The outbreak of violence only served to strengthen the right. The process reached a climax earlier this year, when Zionist Camp leader Isaac Herzog revealed his own diplomatic plan on Jan. 19. With it, he tried to relay the message that the party had come to its senses over the idea of two states, while communicating a sense of frustration over whether Palestinian President Mahmoud Abbas was actually willing or able to reach a diplomatic agreement with Israel.

While Herzog tried to grab both ends of the diplomatic stick, Lapid decided to take a page from the right’s playbook by appealing to the public’s nationalist sentiments. The Yesh Atid leader focused his message on the war against the boycott, divestment and sanctions movement and on human rights organizations. In an effort to win over Likud voters, whenever possible he avoided any talk of territorial compromise in negotiations with the Palestinians.

Thus at that point, the Israeli political system lacked any clear diplomatic distinction between the right and the left. The necessity of such distinctions made itself abundantly clear on Dec. 23, when the UN Security Council passed Resolution 2334, condemning the settlements as illegal. The resolution, which passed after the United States refused to cast a veto, immediately returned the Palestinian issue to the top of Israel’s agenda.

The Zionist Camp’s hidden taxes campaign may have seemed a bit out of touch from the start, but now it looks completely disconnected from reality. Herzog’s Facebook page is currently filled with posts linking the proposed Regularization law (to legalize unauthorized settlements) and the Amona outpost to the Security Council resolution. “Netanyahu isolated all of us for a few isolated caravans. Netanyahu has to go,” read one post. Until now, Herzog had avoided making such statements, particularly over the long period during which he had hoped and believed that he could join Netanyahu’s fourth government as foreign minister. On the morning of Dec. 28, the Zionist Camp met for a discussion dedicated to the “diplomatic avalanche.”

Netanyahu was not the only one surprised by Resolution 2334. It stunned all the major players in the Israeli political establishment. Until then, the election of Donald Trump as US president had only increased the sense that diplomatic issues could be pushed even further aside. The Security Council resolution was a wake-up call to the people of Israel and their representatives. It was a reminder to them that no matter how exhausted they might be over the situation with the Palestinians, and regardless of how frustrated they might feel, Israel will pay a steep price for continuing the occupation. The problem still exists, and it will only get worse.

The two main players in the center-left camp, Herzog and Lapid, are now attacking Netanyahu and his right-wing government over the Security Council resolution. True, Lapid, often considered the barometer of Israel’s political center, began by toeing a firm line against the UN resolution. He tried to assume an official role by helping the government with its public diplomacy campaign. Later, however, he unleashed a scathing attack against Netanyahu.

Resolution 2334 has caused people across the Israeli political spectrum to hone their diplomatic positions. The center-left has been forced to hit the refresh button on its messaging so it can spearhead a diplomatic approach that differs from that of Netanyahu. The Likud responded by attacking Herzog and Lapid, saying, “Instead of presenting a united front against a clear, anti-Israel position … they prefer to stick with the flaccid policies of the left.”

Other processes are also underway in the Likud that are no less interesting. Netanyahu’s 2009 Bar Ilan speech, in which he recognized the principle of a two-state solution, has finally dropped from the radar. So have the internal debates in Likud between the few people who still support territorial compromise and those who oppose it. The Security Council resolution intensified hostility toward a two-state solution, even among the soft right, and intensified animosity toward the outgoing US president. The insults hurled at Barack Obama have been unprecedented. Culture Minister Miri Regev’s Dec. 27 horror show for Channel 2 — "Who is Obama? Obama is history!" — is just one example of how the right has abandoned all restraint.

Accompanying these attacks on Obama are calls for Netanyahu to annex parts of the West Bank. “The conclusion is that we must stop marching along the suicidal track that is a Palestinian state and impose Israeli law on Ma’ale Adumim, the Jordan Valley, Ofra and all of Area C as soon as possible,” Bennett wrote on Facebook.

Ostensibly, Netanyahu finds himself facing an ideal political reality unlike any he has ever seen: He has a tight-knit, right-wing government and a new, incoming US administration that supports the settlements and will not pressure him to freeze construction on the West Bank. In practice, however, he potentially faces a daunting problem: Calls to annex land could get him in trouble with the right.

Until now, the prime minister found it convenient to portray himself as a victim of right-wing extortion, standing in the breach to block their most excessive impulses. Now that the US administration is more accommodating to the right, he will find himself under pressure to implement policies that even he considers too extreme. No longer able to use the Obama administration as a shield, he could easily find himself accused of having left-wing sympathies. For that, he would pay a steep political price.