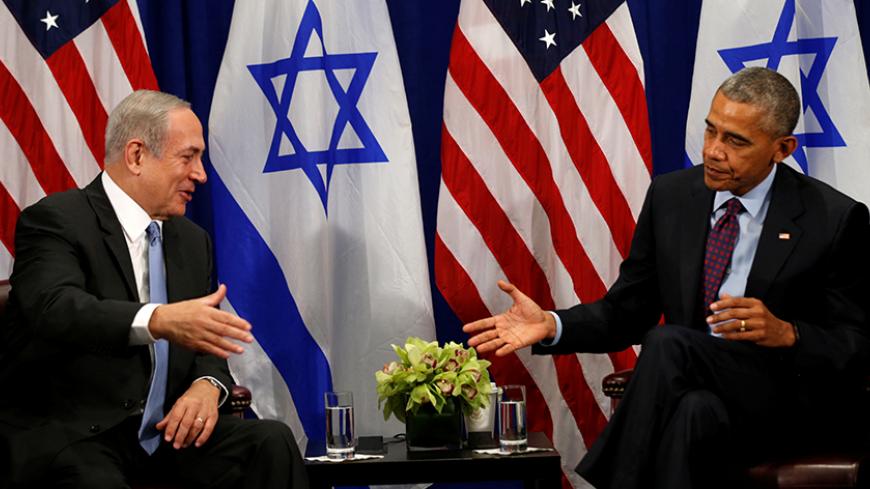 “He doesn’t know it yet … but to a large degree, he no longer functions as the most powerful man in the world, but as a run-of-the-mill staffer for the [Hillary] Clinton campaign.” This quote is from Minister Tzachi Hanegbi, who used a Sept. 22 interview with Army Radio to explain why US President Barack Obama is no longer relevant to the Palestinian-Israeli conflict. It reflects the very limited interest that Prime Minister Benjamin Netanyahu’s meeting with Obama in New York on Sept. 21 evoked among the Israeli media and in the political arena.

Hanegbi, interviewed the morning after the meeting, almost sounded bored when asked to comment on the possibility that Obama might try to impose the outline of a solution to the Palestinian-Israeli conflict on Israel in the remaining three months of his term. Adopting a bemused tone, Hanegbi asserted that if Republican candidate Donald Trump is elected, there is no doubt that he would either ridicule or ignore Obama’s plan. He also assessed that if Clinton is elected, “It is not at all certain that she will have any interest in adopting Obama’s vision.”

It is not as if Hanegbi was being derisive of Obama’s contribution to Israel’s security. Quite the contrary. As a former chair of the Knesset’s Foreign Affairs and Defense Committee, he can testify with confidence that during Obama's two administrations, the United States has stood by Israel on “so many issues and provided aid and assistance on so many matters that the public knows nothing about.” Nevertheless, when it comes to the Palestinian-Israeli conflict, he said, “There is no significance to what Obama does or doesn’t do.”

In the language of political punditry, comments such as this are reserved for politicians considered “lame ducks.” Indeed, this is how the Israeli political system views the possibility that Obama will attempt to impose a diplomatic initiative and put Israel to the test. That is also why Obama’s concern about continued settlement construction, expressed at the start of the meeting with Netanyahu, didn’t cause any right-wing politicians or settlement leaders to storm the media with heated responses, as they would have in the past. They realize that “the danger has passed.”

This was the 17th meeting between the two leaders since May 2009, when Netanyahu first arrived at the White House after his election victory. That meeting featured shrill tones and reports of differences and disagreements between the two men. What transpired during ensuing meetings was no less turbulent and tense. In May 2011, after yet another summit between them, reports spoke of a serious conflict and rift between the leaders over the US demand that Israel withdraw to its 1967 borders. That is why the final encounter between the Obama and Netanyahu, at New York’s Palace Hotel during the annual meeting of the UN General Assembly, was the ultimate anticlimax to their almost eight-year-long turbulent relationship.

The main source of contention between them was, of course, Obama’s hope at the start of his first term that he would bring about a historic peace agreement between Israel and the Palestinians. Obama’s motivation, and later that of US Secretary of State John Kerry, was at the top of the Israeli media’s agenda on a regular basis and exacerbated the dispute between the right and the left.

Before every meeting, the right wing of the governing coalition issued a series of warnings and threats, while the left cautioned Netanyahu that he had to stand by his commitment to advance the two-state solution. So, for example, in 2013, after Obama’s Jerusalem speech, in which he discussed visions for peace, HaBayit HaYehudi Chairman Naftali Bennett warned of the dangers inherent in the president’s plan to end the occupation. It was the early days of Obama’s second term, and he was considered the most powerful man in the world. Bennett was worried that he would succeed in imposing a diplomatic initiative on Netanyahu, with the help of Netanyahu’s center-left coalition partners, Ministers Tzipi Livni, from Hatnua, and Yair Lapid, from Yesh Atid.

Also worthy of mention is Netanyahu’s 2009 Bar Ilan speech, in which he declared his support for the idea of a two-state solution and, under pressure from Obama, announced a freeze on construction in the settlements. At the time, Netanyahu had to engage in a good deal of political maneuvering at home to survive after making what his right-wing coalition partners considered concessions.

Netanyahu survived and thrived. Eight years later, after almost two full terms of an American president with the temerity (and a certain amount of naivete) to think he could end the Palestinian-Israeli conflict, Netanyahu can chalk up a personal victory. He managed to maneuver, drag things out and deal with the conflict with the Palestinians while treating the Obama administration with unprecedented contempt. Time and again, he intervened in American politics, deepening the personal differences between him and the president.

After being elected in 2009, Netanyahu made a point of including a partner from the left in his government. He did this to soften Israel’s position on the Palestinian issue in its dealings with the United States. In 2009, the partner was the Labor Party, and in 2013, it was Livni’s Hatnua and Lapid’s Yesh Atid. After the 2015 election, however, Netanyahu didn’t try too hard to bring Isaac Herzog’s Zionist Camp into his coalition. Instead, he established a right-wing government, which he recently bolstered by adding yet another right-wing party, Avigdor Liberman’s Yisrael Beitenu. With that kind of government and an American president toward the end of his second term, Netanyahu is no longer worried about the diplomatic issue, not least because the peace process itself has lost much of its glamor, even among the Israeli center-left.

That is why Netanyahu felt completely at ease when he sat down with Obama in New York. He could take pride in the security aid agreement signed between the United States and Israel on Sept. 14. Despite the harsh criticism he faced due to claims that Israel could have gotten more, it is still a generous, and important, agreement.

Obama doesn’t get overly emotional over Israeli politicians. Despite Netanyahu’s bluster and rage, the president is ending this chapter of his life with a historic nuclear agreement between Iran and the superpowers as his legacy. At the same time, he also proved that when it comes to the strategic alliance between Israel and the United States, he is the responsible adult who looks out for the security of America’s ally, Israel.

For the many Israelis, including Likud supporters, who continue to believe in a two-state solution, the tepid final encounter between Obama and Netanyahu a little more than seven years after their relationship began signifies a lost opportunity of enormous proportions. They were lost years that only delayed any chance of achieving the terms necessary to reach an agreement. They did, however, lead to the weakening of one partner, Palestinian President Mahmoud Abbas, result in a third intifada and intensify the sense of desperation shared by Israelis and Palestinians alike.