Senior Obama administration officials have reiterated the president's commitment in a 2009 Cairo speech to the two-state solution, reinforcing the US stance to Netanyahu's new government. 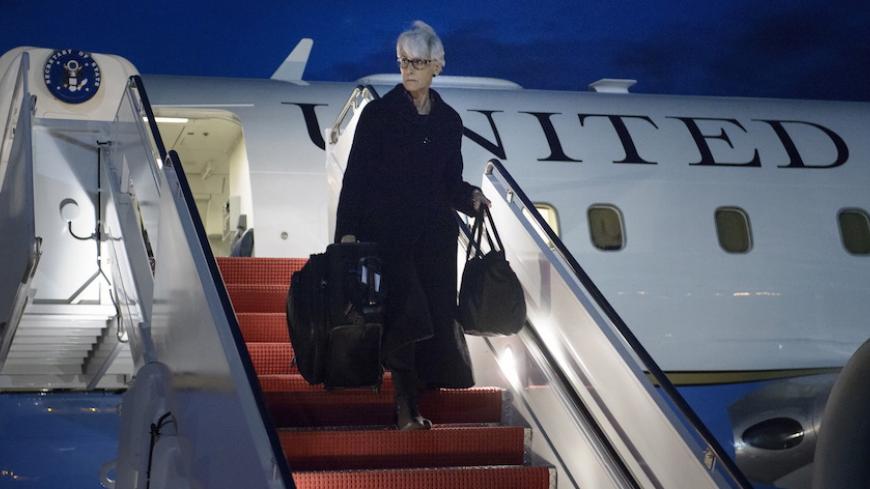 US Undersecretary of State for Political Affairs Wendy Sherman arrives at Andrews Air Force Base in Maryland, April 3, 2015. - REUTERS/Brendan Smialowski

As expected, the message that Undersecretary of State Wendy Sherman relayed this week has attracted considerable interest in Jerusalem. She stated that the US administration plans to take a close look at the new government formed by Prime Minister Benjamin Netanyahu to determine if it “looks like it has stepped back from its commitment to a two-state solution.” Sherman’s prognosis that if Israel does in fact fail to advance this solution — “It will be harder for us to prevent internationalizing the [Palestinian-Israeli] conflict” — was taken as a warning that active US support, or at least fence-sitting, when the Palestine issue comes up for a vote in international forums, would be at risk.

The comments by this senior official, made at a Reform Movement conference in Washington, join the response by White House spokesman Josh Earnest to Netanyahu’s campaign declaration that he opposes a two-state solution. Earnest said that this forces the United States to “evaluate” its approach toward Israel. Both messages insinuate that the freeze in negotiations over a two-state solution may offer a reprise of sorts, but it comes at a cost. The Obama administration wants to make it clear that Netanyahu can no longer rely on a right-wing coalition and policies, pay lip service to a two-state solution and also benefit from an automatic US veto of UN Security Council resolutions.

It seems to be no coincidence that these US messages were released at a critical juncture in the Israeli coalition negotiations. They could be interpreted as a signal to Netanyahu that if he does form a right-wing/pro-settlement government, it will be up to Foreign Minister Avigdor Liberman to convince the French to shelve the proposal they plan to submit to the Security Council recognizing the state of Palestine within its 1967 borders. Secretary of State John Kerry will be too busy with the negotiations with Iran on the basis of the Lausanne Statement, a document that both Netanyahu and the Republicans want to shelve.

In all likelihood, Netanyahu is well aware of these signals. Nevertheless, nothing indicates that the prime minister is considering changing the composition of the next government. The excuse “coalition constraints” has proven itself for decades now as an effective exit ramp from a diplomatic arrangement with the Palestinians. ''The diplomatic process'' would not have trudged about listlessly for so many years and the settlements would not be sprouting up so quickly were it not for the contributions of US emissaries such as Dennis Ross and George Mitchell to the peace process. They and senior officials like them could appeal to the president of the time to adjust US policy toward the conflict so that it met the needs of whatever Israeli coalition happened to be in power.

This approach is better understood from reports of a conversation between Obama and Egyptian President Hosni Mubarak in June 2009, when Obama was in Cairo to deliver his reconciliation address to the Muslim world. Obama apparently told his hosts that in a White House meeting with Netanyahu shortly before, the prime minister told the president that a freeze on construction in the settlements and his agreement to establish a Palestinian state based on the 1967 borders would lead to the dismantling of his coalition and early elections. A senior unnamed Palestinian source was quoted as saying Mubarak responded that it was Netanyahu who decided to put together a right-wing coalition in the first place, and that he cannot keep hiding behind the excuse that the fate of his government is in jeopardy.

Today, Netanyahu does not even bother pretending that choosing HaBayit HaYehudi Chair Naftali Bennett and Yisrael Beitenu leader Liberman as coalition partners stems from the refusal of Zionist Camp leader Isaac Herzog and Yesh Atid head Yair Lapid to join the new government. As far as is known, Netanyahu has not offered Herzog governmental guidelines that would include the minimal requirements for a final-status arrangement with the Palestinians, namely freezing settlement construction and basing the arrangement on the '67 lines. This means that the Likud is no longer pretending to advocate an arrangement with the Palestinians.

Throughout Obama's six years in office, the prime minister has learned that in all matters related to the conflict with the Palestinians, Obama mainly excels in talking. But what do the beautiful words in the president's Cairo speech, words like “America will not turn our backs on the legitimate Palestinian aspiration for dignity, opportunity and a state of their own,” amount to? Who remembers that the president committed himself to fulfilling that goal “with all the patience that the task requires?” Who cares about Obama's statement that the two-state solution is in “America’s interest, and the world’s interest,” and that therefore, “It is time for them — and all of us — to live up to our responsibilities?”

Many years have passed since then, and those promises have long been put aside. To assess the chances of the situation changing in any real way during the last quarter of Obama’s presidency, it is necessary to include a discussion of the Iranian issue. During that same summer in Cairo, at the start of Obama’s first term, the president held what Netanyahu considered the most important strategic card. He could increase sanctions against Iran and even pursue a military option. In August 2009, The Guardian reported that a bargain between Obama and Netanyahu was taking shape. There would be a partial freeze of settlement construction activity in exchange for harsher sanctions against Iran. Aluf Ben, who was then Haaretz's diplomatic correspondent, wrote that in a meeting Netanyahu held with Mideast envoy Mitchell in London, the two men “spoke about [the illegal West Bank outpost] Yitzhar and thought about [Iranian nuclear plant] Bushehr.” He added that Netanyahu was presented with an offer he could not refuse. Israel would receive US backing against Iran in exchange for a settlement freeze.

The Lausanne statement removed the Iranian nuclear card from the Israeli-Palestinian-US arena. Netanyahu and his neoconservative friends have made this very serious card the joker in a game of politics pitting Republicans against Democrats. As far as Netanyahu and Obama are concerned, the negotiations with Iran will be the only show in town, at least until June 30, the deadline set for the final agreement. Then, on July 1, it will be payback time. As Obama promised immediately after the right’s electoral victory in Israel, the United States will remain committed to the two-state solution. With Israel about to install the most right-wing government the country has ever seen, the practical meaning of that statement is either that the Palestinian flag will fly outside the UN building in New York or that a white flag of surrender will fly over the White House.