Prime Minister Benjamin Netanyahu’s explanation for his zigzag on the issue of a Palestinian state is that “reality has changed,” but this excuse cannot justify withdrawing from the only possible solution: an agreement based on the 1967 lines. 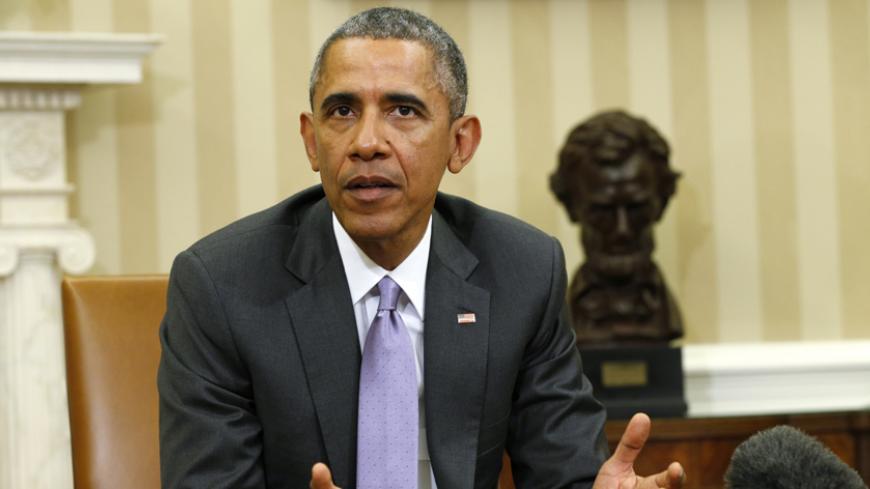 US President Barack Obama speaks about Iran during his meeting with Secretary of Defense Ashton Carter in the Oval Office of the White House in Washington, March 3, 2015. - REUTERS/Kevin Lamarque

It seems that for the first time in a long while, US President Barack Obama believes Prime Minister Benjamin Netanyahu. The interview with Obama published March 21 by the Huffington Post indicates that Obama believes Netanyahu told the truth when he pledged during the election campaign, on March 16, that if elected to another term, an independent Palestinian state will not be established on his watch.

True, after his election victory Netanyahu tried to minimize the damage and claimed that his stance vis-a-vis a Palestinian state had not changed, and that “what has changed is reality,” but Washington doesn’t seem to be impressed. A day before the Huffington Post interview, in response to a question about whether the Israeli prime minister had clarified his position in the phone conversation he had with Obama, White House Press Secretary Josh Earnest said with an undisguised, ironic smile: “It’s unclear which of Netanyahu’s pronouncements about a Palestinian state should be believed.”

Netanyahu’s clarification is reminiscent of the story about a servant who pinched the king’s behind. On his way to the gallows he clarified that there had been a misunderstanding and that he had, in fact, meant to pinch the queen’s derriere. Reality has changed? Of course. It does so all the time. One cannot cross the same river twice. Leaders are required to take advantage of the opportunities offered by changing realities to promote the state’s unchanging interests: security, stability, good neighborly ties, positive international standing and economic well-being. When an unexpected storm hits the boat, this is exactly the right time for the captain to locate the waves that will help him guide his ship and its passengers to safety. This is no time to take a nap.

Not only that, reality in the Israeli-Arab arena has many and changing faces. It includes the demographic balance that forces Israel, if it chooses to continue the occupation, to also choose between becoming a binational state or an apartheid regime. The reality of the occupation strengthens Arab elements demanding abrogation of the Arab League’s Peace Initiative, which will be brought up for debate again at the Arab League summit in Sharm el-Sheikh on March 28. The reality of a diplomatic freeze also threatens the delicate relationships with Jordan and Egypt.

Had the late Prime Minister and Likud leader Menachem Begin adopted the “reality has changed” argument, it is unlikely we would have been marking the 36th anniversary of the peace treaty (signed March 26, 1979) with the biggest and most important Arab state March 26. On the day following the assassination of President Anwar Sadat in 1981, there were those on the Israeli radical right who called for an end to the Israeli withdrawal from the Sinai Peninsula, claiming that the Egyptian regime was about to be overthrown by radical Islam. There were also those who bemoaned the withdrawal when President Hosni Mubarak was deposed in 2011, and reiterated their complaint after the Muslim Brotherhood won the elections.

The commitment to end the occupation of the West Bank, Gaza Strip and East Jerusalem, and to establish a Palestinian state, is not very different than the commitment in the peace treaty with Egypt to end the occupation of Sinai. A permanent arrangement, based on the establishment of an independent Palestinian state, is a central principle in the road map conceived by President George W. Bush, which eventually was accorded the status of UN Security Council Resolution 1515. As mentioned by the White House spokesman, objection to the creation of a Palestinian state contradicts not only Obama’s stance, but also Bush's policy.

Let’s assume the reconciliation between Fatah and Hamas in 2014 constitutes a changed reality, which justifies the freezing of the two-state solution, as mandated by the 2009 Bar-Ilan speech. Does this change justify a physical change in the reality on the ground in the West Bank — a reality that turns the two-state discourse into the search for the key to the gate of a stable after all the horses have bolted? A Peace Now report issued Feb. 23 points to a 40% rise in the construction of homes in that area during the term of the outgoing government. Some 68% of the new buildings were erected in settlements to the east of the line proposed in the Geneva Initiative, meaning in the areas that will make it harder to implement a two-state solution. Some 9% of construction was carried out in illegal outposts. A 10-year peak (at least) of tenders for construction in the West Bank and East Jerusalem was recorded during the same period. In 2014 alone, tenders were issued for the construction of 4,485 new housing units.

The White House and foreign ministries in Washington, Paris, London and Berlin, as well as the headquarters of the European Union in Brussels, are well acquainted with this data. Based on talks with Western diplomats in recent days, it appears that all, without exception, do not believe that the fourth Netanyahu government will advance a diplomatic solution any more than the previous governments he headed. As Ben Caspit wrote here, what is mainly different this time, so it seems, is that Netanyahu will not have at his disposal a fig leaf like those provided by representatives of the center-left, such as former Defense Minister Yitzhak Mordechai, former Prime Minister Ehud Barak and former Justice Minister Tzipi Livni.

Knesset members of the Zionist Camp who spoke with Al-Monitor do not rule out completely that Netanyahu will invite party Chairman Isaac Herzog to join the government, and that Herzog will at least consider the offer. But according to them, the party is unlikely to agree to join a coalition led by the Likud. “Hackneyed excuses such as 'this is the only country we have' or 'the interest of the state supersedes that of the party' will not affect us,” one of them said.

From now on, the international community will be judging Netanyahu according to his deeds, not his words. Sheldon Adelson and his allies in Congress will not help Netanyahu when Obama muzzles the automatic US veto weapon at the United Nations. Netanyahu’s first move has to be inserting the words “Palestinian state” into the basic guidelines of the new government — no less, no more. His next step must be a complete freeze of construction in the settlements and the dismantling of illegal outposts as required by a decade-old government decision, and the release of the Palestinian tax funds that Israel is withholding. The third move should be a release of the Fatah prisoners to coincide with the renewal of negotiations on a permanent arrangement, based on the 1967 borders, without preconditions. First and foremost, Netanyahu must drop the demand that the Palestinians recognize Israel as the nation-state of the Jewish people.

These steps were, and still are, realistic and essential moves for Israel’s security and well-being. Netanyahu’s big win has not changed this reality one iota.