According to his own statements, his openness to the establishment of a Palestinian state based on the 1967 borders threatens to prevent Zionist Camp leader Isaac Herzog from joining a Likud-led government after the elections. 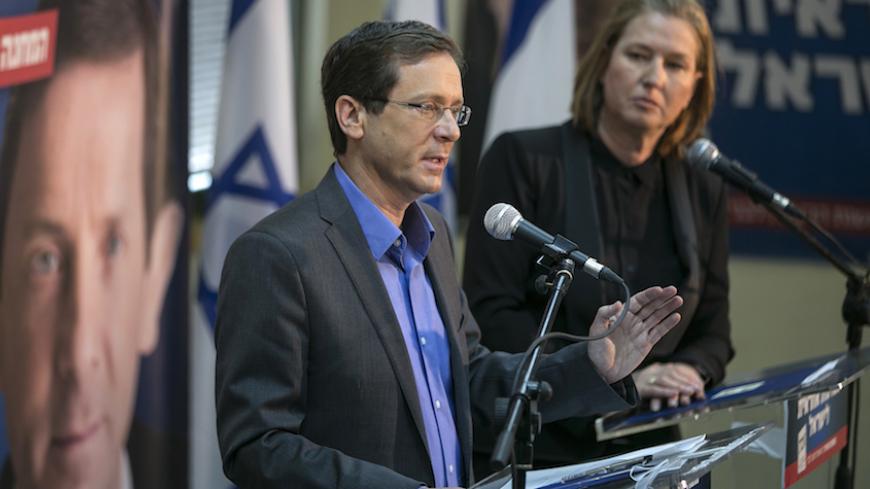 As the date of the Knesset elections draws near, Israelis are setting aside the debate over the country’s future and instead trying to put together the pieces of the puzzle that could form the next coalition government in various configurations. The leading scenario seems to be a national unity government with the Likud, the Zionist Camp and Kulanu, with or without Yesh Atid, with or without a rotating premiership between party leaders Prime Minister Benjamin Netanyahu and the Zionist Camp's Isaac Herzog.

Senior Zionist Camp representatives and veteran commentators note that chairs who relegated the party to the opposition benches in previous elections did not last long. Therefore, they are willing to bet that to be named prime minister, if only on a rotating basis with Netanyahu, Herzog will be willing to make significant concessions. Some even surmise that he would make do with the foreign minister’s portfolio to avoid having to continue in his current position as opposition leader.

The tie between the big blocs may, indeed, force Netanyahu and Herzog to distance themselves from the positions they took on the eve of the elections and move toward ones that will enable the formation of a stable, functioning government. But such steps, too, must have a red line, and it has to be the Green Line — the only point of origin for any negotiations with the Palestinians, under the auspices of the Arab League and the international community, over the establishment of a Palestinian state alongside the State of Israel.

The policies adopted by Netanyahu’s recent governments and the views of Herzog and his friends in the Zionist Camp are far apart. A pamphlet distributed in synagogues in February clearly illustrates this tremendous gap. Referring to Netanyahu’s 2009 Bar-Ilan University speech, it says, “The prime minister announced to the public that the Bar-Ilan speech is null and void. Netanyahu’s entire political biography centers on the struggle against the creation of a Palestinian state.”

Not only that, the belief that Israel must not allow the establishment of a Palestinian state and must not hand over any territory has become the Likud’s stated public position. In an interview with Israeli TV Channel 2 News March 6, Netanyahu’s close associate, Knesset member Yuval Steinitz, reiterated the claim that any land vacated by Israel would be taken over by the Islamic State. He denied recent reports that Netanyahu agreed to return to the 1967 lines, saying, ''Despite agreement in principle to the two-state formula, we say very clearly that under current circumstances here in the Middle East, any withdrawal from Judea and Samaria or from Jerusalem does not constitute a formula for peace but for disaster.''

Herzog laid out his views about the establishment of a Palestinian state and the 1967 lines in a September 2011 article in Foreign Affairs. Surprisingly, Herzog suggested that Israel refrain from thwarting UN recognition of a Palestinian state and even vote in favor of it joining the organization. In his view, Israeli rejection of such a UN resolution could result in violence on the ground and drag Israel into a response that would deepen its international isolation and pave the way for more calls to boycott Israeli goods and businesses. In addition, a confrontation at the UN at a time of historic change in the Middle East would weaken Israel’s strategic position.

Herzog presented a detailed diplomatic plan with a well-reasoned and cogent argument. The Palestinians would be required to renew negotiations over a permanent agreement as soon as possible, backed by the international community. Negotiations would be based on the parameters set out in 2000 by US President Bill Clinton and repeated by President Barack Obama in May 2011, recognizing the right to self-determination by the Jews and the Palestinians (contrary to recognition of the nation-state of the Jewish people), the establishment of a Palestinian state based on the 1967 lines, security arrangements responsive to Israel’s needs and land swaps enabling Israeli annexation of the settlement blocs and Judaism’s holy sites. The UN resolution recognizing Palestine would reflect these positions.

Herzog went even further, suggesting practical steps during the interim period until a permanent arrangement is signed: transferring additional security powers to the Palestinian Authority, freezing construction in the settlements located on the eastern side of the security barrier, compensating settlers who ask to be evacuated and releasing Fatah prisoners.

The political platform of the Zionist Camp also stipulates that two states are the clear solution to the conflict. The secretary-general of the Labor Party (now renamed Zionist Camp), Knesset member Hilik Bar, heads the two-state Knesset lobby, which has adopted the Arab Peace Initiative.

Herzog, as well as Yesh Atid leader Yair Lapid, Kulanu leader Moshe Kahlon and even Foreign Minister Avigdor Liberman have been talking a lot in recent months about a regional arrangement that would include moderate Arab states in resolving the conflict. They have on their desks a study by the HaGal Hadash Institute pointing to significant public support for such an agreement. The extensive study, conducted for the Israel Peace Initiative organization, shows that 72% of respondents (Jews only) support a regional arrangement for ending the conflict that would lead to separation from the Palestinians and a two-state arrangement. Of those polled, 64% believe that a continued diplomatic freeze harms the security of the state and 60% are certain that a regional defense arrangement with Arab states on fighting terrorism and Iran would make Israel much safer.

Based on the comments of a senior White House official quoted in the top Israeli daily Haaretz's front-page story March 6, the Obama administration apparently does not intend to wait for a new announcement from Jerusalem. Immediately following the formation of the new government, the United States is expected to push forward a diplomatic initiative to further the two-state solution. The formula will be based on an Israeli withdrawal to the 1967 lines and land swaps, Jerusalem as the capital of the two states and an agreed-upon solution to the refugee problem. This formula is the "separation fence" between a Jewish and democratic state and a binational or apartheid state, between an enlightened and admired state to a boycotted and ostracized one.