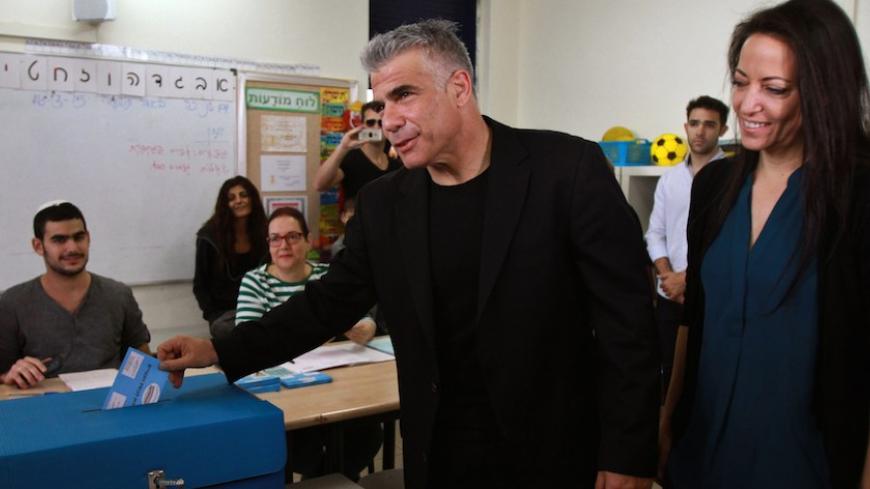 For the first time since announcing his entry into politics in January 2012, Yesh Atid leader Yair Lapid finds himself leading Prime Minister Benjamin Netanyahu in the polls. A survey taken Sept. 6 and reported on by Channel 2 gives Lapid 24 mandates, if elections were held today, compared to 22 for Netanyahu and Likud.

While this does not automatically turn Lapid into the next prime minister, it does show that Lapid has successfully completed the most important mission he has faced in recent years: to become a legitimate candidate for the position of prime minister of Israel. Lapid is already there, in a big way. His place in the ring as rival contender to Netanyahu is assured. As they say in the world of sports, Lapid has made it to the finals.

On Aug. 28, Lapid organized a pro-Israel demonstration in the Swedish capital of Stockholm. Israeli media followed the event with glee. Lapid stood at a podium, opposite a handful of protesters, and forced people to repeat after him, “I love Israel,” over and over. He sharply criticized Sweden's foreign minister, Margot Wallstrom, who has accumulated quite a number of anti-Israeli statements under her belt. After that he begged the audience to post remarks on the Facebook page of Czech President Milos Zeman to protest Tel Aviv, and not Jerusalem, being identified as Israel’s capital on official Czech maps.

The media made mincemeat of Lapid over this, but it turns out he has the last laugh. Only about a year ago, Lapid was a dark-horse candidate with single-digit support in polls probing the suitability of candidates for the premiership. He has now become Netanyahu's only challenger to the throne.

How did he do it? The answer is quite simple: Lapid is the new Netanyahu. He doesn’t attack Netanyahu from the left. Instead, he tries to outflank him from the right and criticize him from the center.

In the final stretch of recent election campaign, one candidate would always emerge as the quintessential “anti-Bibi.” In 2009, it had been Hatnua leader Tzipi Livni; in 2013, it was Lapid in his premiere performance; and in 2015, it had been Zionist Camp leader Isaac Herzog. Then Lapid, buttressed by effective, in-depth surveys by the American pollster Mark Mellman, understood that Israelis are not looking for an “anti-Bibi.” Under the best of circumstances they will look for another Bibi, an alternative who constitutes an upgraded version of the current Bibi. This is exactly what Lapid is doing.

The current poll was conducted at the conclusion of a tough week for Netanyahu, who capitulated to demands by the ultra-Orthodox parties and halted maintenance work on the Israel Railway system scheduled for Sept. 3 during the Sabbath. The issue turned into a public relations disaster for Netanyahu because it forced the shutdown of major rail lines on Sept. 4, creating huge traffic jams across large swaths of the country. It took the public back to the dark days of Netanyahu in the twilight of his first term of office, when the ultra-Orthodox “bear-hug” suffocated him and led to his defeat in the 1999 elections.

The 22 seats Netanyahu would garner in this week’s poll constitute a low point in contrast to Likud's current 30 seats in the Knesset. One may, however, assume that Netanyahu will find a way to recover and recoup some lost votes. What he may not know how to do, on the other hand, is cope with the new challenge embodied by Lapid.

Netanyahu will have a hard time casting Lapid as an “Arab-loving left winger,” as he has done to other rivals, in particular Herzog. Lapid was brought up and educated in a right-wing household. Negotiations with the Palestinians are not on his agenda. He sidesteps the diplomatic issue at every opportunity and obscures his real positions while viewing Jerusalem according to the Israeli consensus. Lapid speaks the language of liberal, hip Tel Aviv, but infuses it with right-wing content.

Thus anyone tired of Netanyahu’s public conduct, his tricks and sleights of hand, his attacks on democracy and the media and his emperor-like demeanor will find refuge in Lapid. He is somewhat similar to Netanyahu, but without the chaos and hysteria. Lapid is a younger, vigorous politician who will rehabilitate Israel’s status among nations and usher in a different type of politics. This is what Lapid offers, and this is his goal. He is programmatic, disciplined and an excellent campaigner. Netanyahu knows how to spot a threat, and Lapid, for now at least, is at the top of Netanyahu’s list of dangers lying in wait.

The new survey, which generated a stormy political discourse, was conducted by Mina Tzemach and Mano Geva, two of Israel’s most reliable and seasoned pollsters, and contains another interesting finding: Out of 24 seats that Lapid theoretically would win if elections were held today, three of them would come from the Likud. This, too, is a precedent, and a dangerous one from Netanyahu’s perspective. Until now, it was clear that Lapid had lured voters primarily from the center-left electoral pool, especially Herzog’s Zionist Camp pond, which is rapidly drying up. Now it seems that Lapid’s turn to the right is starting to mature and bear fruit. The question is whether Lapid will succeed in strengthening his right-wing momentum without losing the charisma that has attracted the center-left. This will be his main mission for the next elections.

After the poll results were broadcast, the Likud issued an announcement stating, “There is no reason for agitation over the survey.” The announcement itself testifies to the agitation the findings generated in Netanyahu. In the statement, the Likud tries with all its might to brand Lapid a “leftist” and concludes, “The slander against the Likud is designed … to produce a left-wing government, which like all previous left-wing governments … will also create a coalition with the ultra-Orthodox parties, will make no changes on issues of religion and state but will make dangerous and irreversible concessions vis-a-vis the Palestinians. This is what has already happened in the past and is something that a Likud government headed by Netanyahu will never, ever do.”

While this statement was vibrating the cell phones of diplomatic correspondents, Netanyahu met with Mikhail Bogdanov, Russia’s special envoy to the Middle East. This concerned part of the prime minister’s effort to advance a summit between himself and Palestinian President Mahmoud Abbas in Moscow. In the meeting, Netanyahu repeated his commitment to a two-state solution. It does not bother Netanyahu at all that this diplomatic commitment is incompatible with the political proclamation that was simultaneously released heralding that concessions will never be made to the Palestinians. He has managed to outmaneuver everyone and juggle all his balls in the air for many long years. This is his special talent, one that he has elevated to an art form. No one can compete with Netanyahu in this field.

One question, however, remains unanswered: How long will Israelis continue to believe him? For the first time in a long time, a suitable, worthy political rival is emerging against Netanyahu, vying for his slot. Lapid has charisma, silvery hair, a captivating yet determined air about him and is 15 years younger than Netanyahu — and far more accepted overseas. This will be interesting.