Israeli center-left leaders' adoption of rhetoric to appeal to the right instead of crafting credible policy alternatives indicates that they have not learned the lessons from their March electoral loss and will be unprepared for early elections. 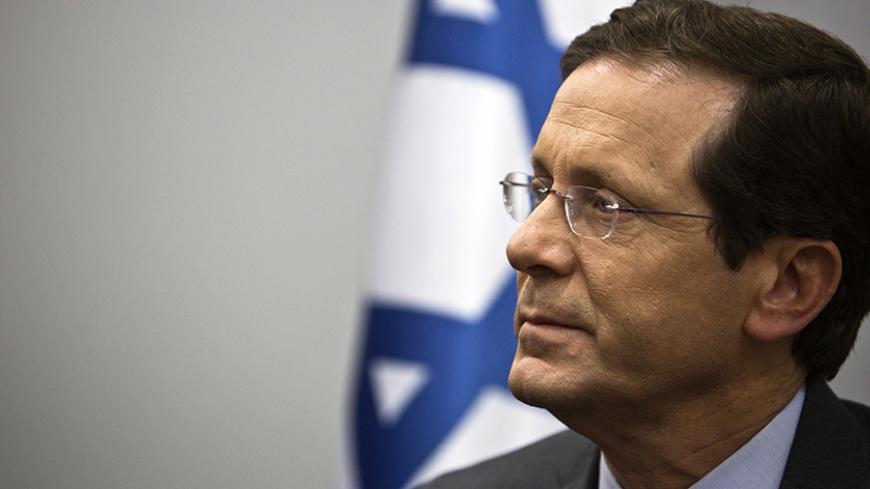 Isaac Herzog, co-leader of the center-left Zionist Camp, is seen at his party's headquarters in Tel Aviv, March 16, 2015. - REUTERS/Nir Elias

You don’t have to be an expert strategist or a specialist in political branding to recognize what is happening. Over the past few weeks, the chairman of Yesh Atid, Yair Lapid, has launched his campaign to become the next prime minister. Lapid’s moves are transparent and obvious to everyone. He seems to be following a planned strategy backed by in-depth research and polling and dependent, of course, on the lessons he learned from the last elections.

By attacking the “unpatriotic left,” Lapid is trying to bolster his appeal to the right. At the same time, he is trying to shed his image of someone who gobbles the ultra-Orthodox for breakfast. He is, therefore, making a show of drawing closer to them and making sure that it is all documented. So, for example, he was photographed wearing a prayer shawl and yarmulke at a symbolic bar mitzvah for Holocaust survivors. Lapid’s success in the 2013 elections, in which his party won 19 seats, was largely attributed to his campaign against the ultra-Orthodox, insisting that they share the public burden of military service and labor market participation. Now, however, he is using every opportunity to give interviews to the ultra-Orthodox press, to which he expresses deep regret for the way he treated that community.

Lapid’s strategy is based on the idea that it is impossible to be elected Israeli prime minister by the center-left alone. To win the support of the soft right, he has to shake off the left, demonstrate his patriotism and show a connection to Judaism and tradition. Politically, Lapid believes that he cannot put together a government without the ultra-Orthodox, explaining his efforts to cozy up to them.

Actually, Lapid’s campaign to take over the prime minister’s office shares quite a few motifs with Prime Minister Benjamin Netanyahu’s past campaigns. A Facebook post from July 24 opens with, “Here is more proof, for anyone who needs it, that there are people on the Israeli left who have gone off the rails.” He goes on to describe how representatives of Breaking the Silence, a group of IDF veterans seeking to “expose the Israeli public to the reality of everyday life in the occupied territories,” participated in an event sponsored by the Kibbutz movement and says that the group’s members “roam the world with the help of foreign funding and slander the state of Israel using anonymous testimonies.”

If the Yesh Atid chairman had not signed the post, it could easily have been attributed to Netanyahu. The opening sentence was actually reminiscent of the time Netanyahu met with the Kabbalist Rabbi Kaduri right before his loss in the 1999 elections and whispered the ingratiating and polarizing statement, “The left has forgotten what it means to be Jewish."

The last elections, held March 17, left the center-left battered and bruised. Netanyahu managed to pick himself up from the ruins of his third government and, against all predictions, win 30 seats. With a focused message that placed Arabs and the left in his crosshairs, Netanyahu succeeded in convincing voters that he was a true patriot who knew how to ensure the security of Israel.

With a combined total of 36 seats, the Zionist Camp and Lapid were left behind in the opposition. They could use this opportunity to draw conclusions and build a new strategy for the next time. In the case of the Zionist Camp, it seems that its leader, Isaac Herzog, has only recently abandoned his dream of a unity government and has now begun putting together a real plan of action. Like Lapid, Herzog believes that his ability to win the next election depends on whether he can move toward the right.

Using his considerable talents during the 2015 campaign, Netanyahu was able to stick the Zionist Camp with the moniker “Anti-Zionist Camp.” Focus groups from both parties found that Netanyahu had hit the bull’s-eye. The Zionist Camp was wounded. Although senior members of the party visited the country’s markets and periphery development towns, far away from the Tel Aviv bubble, and reveled in the warm receptions they received, when election day came they learned that in the periphery, the Zionist Camp is still considered too left and too Ashkenazi. It did not matter that it is a socially oriented Zionist party.

These days, Herzog is talking openly about how he is moving the party to the center. Like Lapid, his actions are transparent, as was his surprising, headline-grabbing remark that the 2005 disengagement from Gaza was a security mistake. This came in addition to his denouncing of the Marianne Gaza flotilla and, of course, his harsh attack on the Iranian nuclear deal, competing with Netanyahu and Lapid over who could be more aggressive in attacking the “bad agreement.”

In a July 19 speech to the Labor Party Conference, Herzog described what the Labor Party must do if it wants to return to power. He said, among other things, “Only if the next few years we succeed in proving that we are not and never have been in opposition to Israelis, and never in opposition to the state … only when we can prove that when it comes to security issues, we are aggressive, we do not compromise.”

Efforts by Lapid and Herzog to win votes from the right by using right-wing rhetoric prove that the center-left has drawn the wrong conclusions from its electoral failure. This really stuck out after the July 14 announcement of the Iran nuclear deal. Lapid and Herzog joined the chorus of Netanyahu, Education Minister Naftali Bennett and Yisrael Beiteinu leader Avigdor Liberman, screaming that it was a terrible agreement that put Israel in danger, although they also blamed the situation on Netanyahu’s shaky relationship with US President Barack Obama. The Israeli public could rightfully ask what the difference is among Netanyahu, Lapid and Herzog. What alternative do Lapid and Herzog offer, other than claiming that Obama would talk to them? That is hardly a convincing argument, and more importantly, it's not an alternative.

There is a lack of clarity on the diplomatic front as well. Both Herzog and Lapid know that the Israeli public is exhausted with the Palestinians and nervous about its safety. Lapid and Herzog talk about regional negotiations, the need for a diplomatic process and how the current situation endangers the Zionist majority. Even Netanyahu, however, does not reject negotiations and has expressed a desire for real peace. In a July 9 interview with Al-Monitor, Zionist Camp Knesset member Eitan Cabel said that one of the conclusions that could be drawn from his party's loss in the last elections is that it should adopt the language of the Likud and stop telling the public what concessions it is willing to make to the Arabs. Rather, it should explain the danger faced by Zionism if there is no agreement.

The feeling is that the center-left lost its self-confidence in the last elections. That is why it is trying to imitate the Likud’s success instead of offering an alternative.

By the way, senior Zionist Camp members have noted that despite repeated talk of investing in grassroots work on the periphery, there is still no outlined, organized plan to open branches there or to enhance party activity in periphery towns. That is too bad, because if Herzog’s prediction comes true that the winter session of this Knesset will be its last, the Zionist Camp will find itself unprepared for the next round. It is still disconnected from the more traditional Mizrahi public and trying in vain to compete with Netanyahu and the Likud by using right-wing rhetoric. Most of all, it is doing all that instead of presenting an unapologetic and detailed alternative that could appeal to right-wing sentiment from a different angle.