Is Israel breaking left under Bennett?

The decision to evacuate the West Bank Evyatar outpost suggests that the new government is further left than right. 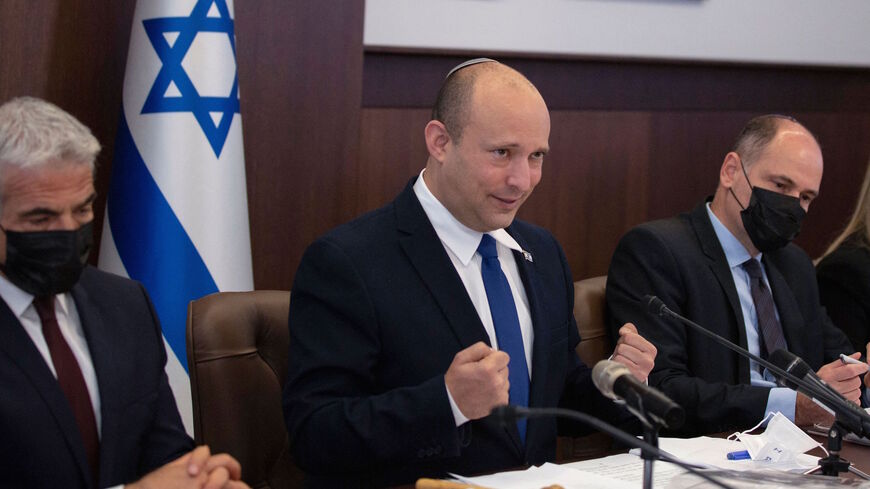 “The outpost will be evacuated. It is illegal. It is not at all a question of right or left. It is an order from the army and the civil administration,” declared Alternate Prime Minister Yair Lapid at a June 22 press conference.

Evyatar is an illegal outpost in the domain of the Samaria Regional Council, close to the Palestinian villages of Beita and Yatma. The Israel Defense Forces has ordered its evacuation and now it is the center of a political storm. According the security establishment, the outpost has fueled conflict. The IDF has long kept tabs on the activities in the outpost and the site has been built up in recent years, including structures inhabited by dozens of families in violation of the law. Reports this evening say that Defense Minister Benny Gantz reached a compromise with the settlers, but no official decision has been published.

Though even former Prime Minister Benjamin Netanyahu could not ignore orders from the IDF and ultimately would have been forced to evacuate the illegal outpost, his government postponed dealing with the evacuation. It left the hot potato for the new government to deal with, portraying the new government as a leftist body that is intent on harming the settlers and Prime Minister Naftali Bennett as trying to destroy the settlement movement.

That Bennett had served as head of the Yesha Council and was viewed as the settlers’ inside man, had created expectations that the government would have a right-wing orientation. But it is the center-left parties and Ra’am that are setting the tone. The fact that Lapid spoke so clearly and decisively about the evacuation of Evyatar shows the direction the new government will take.

During the election campaign, Bennett had promised not to join a government headed by Lapid. Three days before the March 22 election, Bennett was interviewed by Makor Rishon, a right-wing newspaper identified with the settlers, and confidently said, “I’ll tell you our conditions [for coalition partners] – any party that declares itself to be Jewish and democratic and is not against IDF soldiers. Regretfully, Meretz for example operates against IDF soldiers when it supports the International Criminal Court in The Hague. Thus, they are no longer with us in the Zionist boat.”

But though Bennett was initially unwilling to ally himself with Meretz and Ra’am, calling them anti-Zionist, he was sworn in as prime minister of Israel due to their votes and is now dependent on their support.

Therefore, most observers believe that the Bennett-Lapid government will evacuate Evyatar's 50 families, exactly like the police evacuated the illegal Oz Zion outpost on June 23, despite the protests of the settlers. Bennett said this evening the compromise with the settlers was not yet a done deal.

Meretz Knesset members, who have protested illegal construction in the settlements for decades, arrived to the Itamar settlement on Tuesday and praised Lapid. Former Peace Now CEO and current Knesset member Gaby Laski, who was also present, commented, “The path to ending the occupation begins with putting an end to the settlement project. The Evyatar outpost must be evacuated, the sooner the better.”

While Laski is known for making such statements, this time she did so as a member of the ruling coalition under Bennett, who before the elections also swore that he would never sit with Meretz.

The leftist partners of the coalition clearly have no intention of giving up their agenda. For example, legislators Mossi Raz of Meretz and Aida Touma Sulieman from the Joint List put on a controversial event last Tuesday called “After 54 years: from occupation to apartheid.”

The event embarrassed the right-wing members of the government. In normal times, Bennett and Interior Minister Ayelet Shaked would lead condemnation of the session and argue that it undermined Israel’s Zionist foundations. This time, however, they said nothing. The atmosphere was stormy; legislators on both sides cursed and yelled at one another.

Another explosive subject is that of extending the temporary provision known as the family reunification law. The original law that was enacted in 2003. It was intended to stop Palestinians from entering Israel and gaining residency after marrying Arab-Israeli citizens. Israel was in the midst of the second intifada, with hundreds of Israelis injured or killed in terror attacks in city centers. It emerged that some of the Palestinians involved in the terror attacks had lived in Israel due to marriage. Therefore, the law held security significance.

Since then, the law has been automatically extended every year. Again, Netanyahu left this issue for the new government to deal with, knowing that it would embarrass the right-wing coalition members when legislators from Meretz, the Labor Party and Ra’am argued that the law is discriminatory and racist.

The Likud legislators announced that they had no intention of coming to the rescue of “a dangerous left-wing government.” Under these circumstances, a compromise solution started to take shape in recent days under Ra’am chair Mansour Abbas and New Hope's Ze’ev Elkin: only Palestinians who married Israelis before 2003 will receive resident status.

On June 30, the law will be brought to a vote. But whatever happens, it seems that the Likud faction has already painted Bennett’s administration as Israel’s first left-wing, post-Zionist government.