The deal made with settlers on the evacuation of the Evyatar outpost and the upcoming Knesset vote on the controversial citizenship law are already destabilizing the coalition. 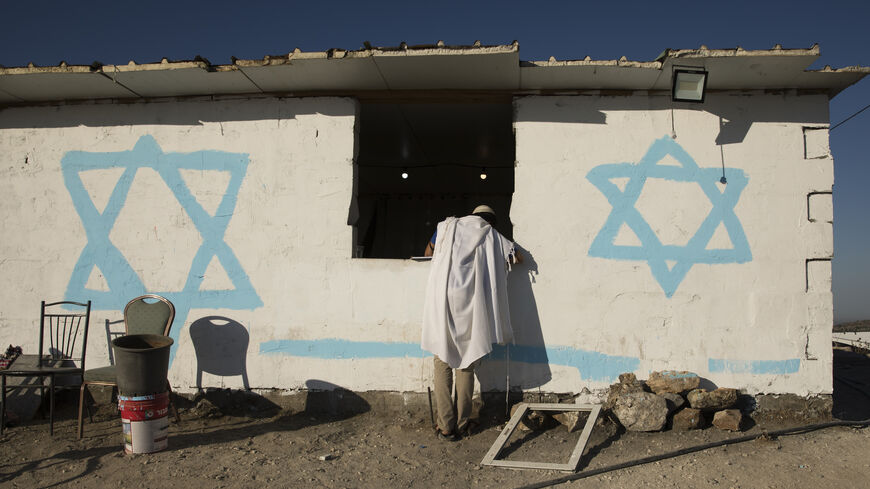 A Jewish Israeli settler prays at the outpost of Evyatar on July 2, 2021, near Jabal Subeih, West Bank. - Amir Levy/Getty Images

“Terrorists,” Knesset member Mossi Raz of Meretz described the settlers in the illegal outpost of Evyatar. His sharp remarks in an interview this week came in response to a compromise that the government reached with the settlers living in the outpost.

The Israeli Defense Forces initially ordered the settlers to evacuate, but later on the government reached a compromise with them to be evacuated by 4 p.m. today in exchange for the government looking into the status of the land and verifying if it would be possible to regularize it. In other words, the residents would be removed, but their homes would not be demolished for the time being. The outpost was evacuated peacefully today.

“Bennett has just promised a government that is 10 degrees to the right of the previous government. It is insanity, plain and simple. It is letting criminal terrorists decide where a new military base will be located,” Raz raged.

If Raz had not been a member of the new coalition and if the leaders of his party did not hold key cabinet positions, little media attention would have been paid to his remarks. After all, Raz is a former head of Peace Now, a movement founded in 1977 to oppose the Israeli occupation of the territories. Now, he and the other members of Meretz find themselves in an impossible situation, expected to ignore their own banner issue.

Like Raz, Knesset member Gabi Lasky also once led Peace Now and has waged a long campaign against the occupation. She is also opposed to the compromise, calling it “whitewashing.” As a lawyer, Lasky frequently represented Palestinian plaintiffs in court cases targeting the wrongs of the occupation. Now she finds herself part of a coalition that is normalizing illegal Israeli outposts in the West Bank.

This pocket of opposition within the Bennett-Lapid coalition has created a volatile situation that has the potential to blow up the most polarized coalition in Israel’s history. After achieving its overriding goal of removing Benjamin Netanyahu from the prime minister’s office, the coalition must now confront the serious ideological divisions that were always expected to threaten its stability. It's only surprising how early it has begun, just three weeks into the government's term.

The members of Meretz are particularly infuriated by the way Prime Minister Naftali Bennett and his right-wing allies tried to turn the compromise into a public relations victory for the settlers. They did so to win back supporters on the right, who abandoned them for forming a government with the left and the Islamist Ra’am Party.

The truth of the matter is that the compromise does look like a major victory for the settlers. The state folded and overturned an evacuation order issued by the IDF, which determined that Evyatar is an illegal settlement that must be removed. Sources in the IDF explain that the settlers provoked the local Palestinians, causing tension.

While Raz has referred to the people living in the illegal settlement as “terrorists,” Interior Minister Ayelet Shaked, who is Bennett’s number-two in Yamina and negotiated the compromise agreement, refers to them as “the pioneers of Evyatar, who take pains to show us what Zionism is all about.”

The compromise indeed suggests the government has surrendered to the settlers. After the reassessment of the land upon which it was built, it reads, “land deemed eligible will be declared state land, and the remaining land will be evacuated. Boundary orders and orders to remove existing structures will not be implemented until then.”

The compromise agreement also states that if the territory is declared state land, interested parties will be allowed “to establish a yeshiva on the site, with residences for its staff and students and their families.” Then, once “the requisite property and planning processes” are completed, the government will permit a permanent civilian presence at the site.

The agreement runs counter to everything Meretz stands for. The Evyatar outpost was established on land that makes up part of three Palestinian villages. In the last few weeks, four Palestinians were killed protesting the outpost. Furthermore, the legal status of the land upon which it was established is unclear, meaning that it is entirely possible that it was built on privately owned Palestinian land.

Although it is unlikely that the Evyatar compromise will escalate to the point that it brings about the collapse of the coalition, it makes it harder for the coalition partners to work together. It is certainly increasing tensions before July 5, when a bill on citizenship and entry into Israel is scheduled to be voted on by the Knesset. It's one of the first hot-button issues facing the new government, because of its clause preventing family reunifications for Israeli Arabs who marry Palestinians from West Bank. The rule, which was first introduced as a temporary measure, has been confirmed annually by the Knesset since the law was first passed in 2003. The legislation is another major issue for Meretz, which petitioned the Supreme Court to overturn the law when it was first passed as discriminatory and racist.

Yesterday Meretz' leader, Health Minister Nitzan Horowitz, informed his Knesset faction that Meretz would be voting against the law. The party is currently considering having some of its members actively oppose the extension while others absent themselves from the vote.

“Meretz has always opposed the citizenship law. We demonstrated against it, we voted against it and we filed suit against it in the Supreme Court,” the party responded on Twitter. “A law that discriminates against a sector of the population for racial reasons and that was born of sin should not be brought before the Knesset. If, despite all this, it does come up for a vote, Meretz will oppose it. This reflects the values of Meretz. It is our position and will remain our position, regardless of whether we are in the opposition or the coalition.”

Meretz, Ra’am and Labor have all announced that they intend to vote against it. So far, efforts to reach a compromise within the coalition have failed. Thus, for the moment, the government does not have the majority needed to extend the legislation by another year. Nevertheless, Shaked still plans to bring it up for a vote on Monday. The current law expires on July 6.

On Monday, the opposition could toss the government a lifeline. If the law expires, it would be a blow to the coalition’s image. The government will not fall over the matter, but its principled ideological tensions will continue to wear away at it.