A temporary Israeli immigration measure's yearly renewal has put the members of the new government in an uncomfortable position. 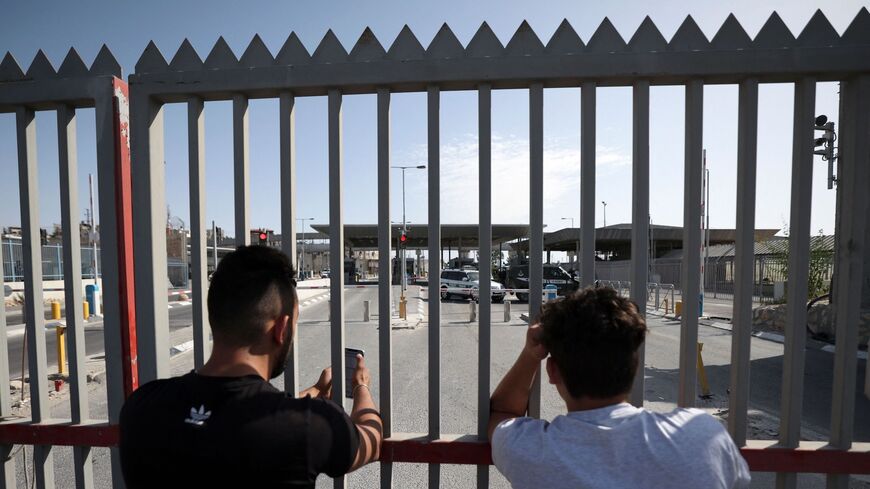 Palestinians wait by the gate of the Qalandia checkpoint between the occupied West Bank and Jerusalem after Israeli security forces closed it following a reported attack, on June 12, 2021. - ABBAS MOMANI/AFP via Getty Images

At issue is the annual renewal of an order than prevents family unifications between Arab citizens of Israel and Palestinian residents of the West Bank or Gaza.

The Knesset vote was scheduled for June 21, but was delayed in view of objections by coalition party Ra’am as well as members of leftist Meretz and Labor. The right-wing opposition parties, although ideologically on board with the order, rebuffed coalition efforts to ensure their support, arguing that their job was to unseat the new government, not help it.

The order, which expires on July 6, exposes inherent difficulties in the makeup of the government that do not bode well for its effectiveness.

The order is a temporary 2003 measure that must be renewed each year. It was prompted by a wave of suicide bombings within Israel during the second intifada, some of which were aided by Palestinians from the West Bank and Gaza. The cabinet of then-Prime Minister Ariel Sharon was troubled by the security and demographic implications of family unifications, which had provided Palestinians with access to Israel. Data presented at the time to the Sharon government by one of its ministries warned that the allowance could pose a threat to the Jewish nature of the state within decades.

Leftist and Arab parties as well as human rights organizations challenged the amendment’s constitutionality on numerous occasions without success and its renewal has been approved with broad support from the right and center-left.

This year, the renewal is exposing cracks in the new government that was voted in on June 13 by a tiny Knesset majority of 60 to 59. Ra’am has already notified Bennett that it will vote against renewal. So did Minister of Regional Cooperation Issawi Frej and his fellow Meretz member Mossi Raz, as well as Knesset member Ibtissam Mara’ana.

Raz has been a leading opponent of the law, describing it on Twitter as “a discriminatory law that imposes restrictions on the Arab citizen, determines who he is allowed and who he is not allowed to fall in love with and considers every Arab citizen a security and demographic threat.”

Knesset members of the Joint List, an alliance of three Arab parties, are watching the mayhem from the sidelines, perhaps enjoying the trap in which their former partner and now rival finds himself. Joint List Knesset member Ahmad Tibi said in an interview that anyone supporting extension of the order “would be complicit in an unprecedented moral and political crime.”

The issue has become a battlefield for the survival of the new coalition. Shaked has been blaming the Likud for torpedoing its renewal.

Last week she promised to bring the amendment up for a vote this week. “I cannot imagine that the opposition would undermine the security of the state in the name of political games. I am sure they will display the required maturity and support the law,” she tweeted. In a dig at former Prime Minister Benjamin Netanyahu, she added that she hoped he would keep his promise that when it comes to the security of the state, "There is no opposition, and no coalition. On such matters we are all on the same front.”

Ze’ev Elkin, a former Likud stalwart appointed by the coalition as its point person on the crisis, said in an interview that he was under no illusions regarding the complexity of the governing coalition. “I hope Netanyahu and his people come to their senses, put security above all and vote with us. A terrorist who comes along and carries out an attack will not differentiate between Netanyahu supporters and opponents.”

The Likud says the entire affair is an outrage and ridicules the coalition. Knesset member Miki Zohar responded to Elkin in a tweet, “You have established a dangerous, irresponsible government composed of those who reject Israel as a Jewish state. Extinguishing the fires you have lit is not one of our goals.”

Meanwhile, under instructions from Netanyahu, who is now the opposition chair, the Likud has turned its back despite its previous ironclad support for the order. Last week, the Likud ratcheted up the pressure, with the support of the Religious Zionism party, by introducing legislation anchoring all aspects of immigration to Israel in a quasi-constitutional Basic Law. In its announcement, the Likud said security considerations “oblige us to advance a basic law. We expect every Zionist party to vote in favor and put Israel ahead of all coalition considerations.” Such sweeping legislation would be far more controversial for the coalition and would greatly embarrass its right-wing parties.

There is no telling whether the opposition will eventually vote along with the coalition. In the meantime, the Likud insists its task is to unseat the anti-Zionist government imperiling Israel's future. This saga is far from over. Behind closed doors, Netanyahu is apparently betting that this government will not survive more than a year.