Acting from the opposition benches as a shadow prime minister, Benjamin Netanyahu succeeded in blocking the approval by the Knesset of the Citizenship and Entry into Israel Law amendment. 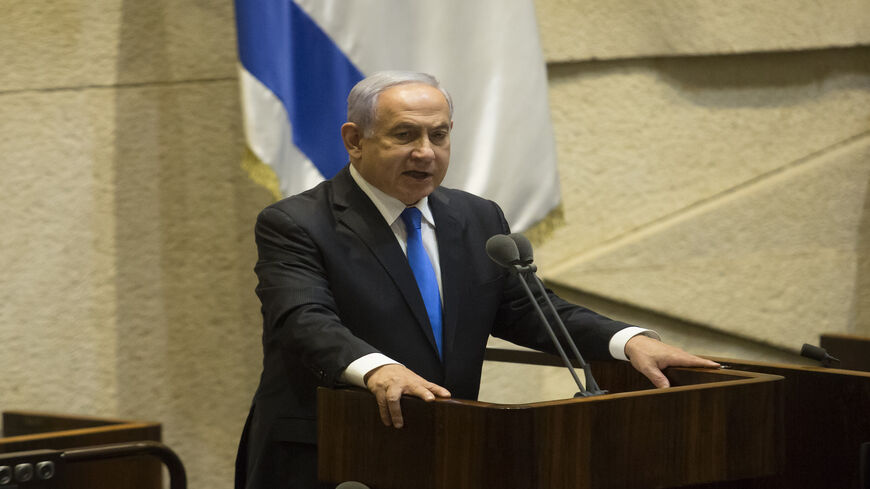 Cheering and applause accompanied the new leader of the opposition, Knesset member Benjamin Netanyahu, when he left the plenum this morning, July 6. It had been a long, hard night, and in the end the coalition suffered a stunning defeat by failing to extend the amendment to the Citizenship and Entry into Israel law, targeting Palestinians married to Israelis and preventing family reunions.

“You’re our prime minister now and forever,” someone in the chamber called to him. Netanyahu waved back in victory before leaving to catch a few hours of sleep. He still had a full day of exhausting parliamentary squabbles ahead of him, and he had been up all night. Perhaps he wanted to serve as a personal example to the other members of the Likud, or perhaps he wanted to instill a fighting spirit in them. The new government did not fall. It can continue to function, at least for the time being. Still, there was no doubt that it suffered a serious defeat.

Netanyahu, now 72, served as prime minister for 12 consecutive years, and another three years, from 1996 to 1999. Last month, he began his third term as leader of the opposition. Although he is fighting criminal charges in court, he still believes that in another year or two, he will be back in the prime minister’s office.

Anyone who expected Netanyahu to resign, or at least to slip into a state of melancholy after losing his job as prime minister, is discovering yet again that this is one man who never gives up. It is the secret of his survival.

Just an hour after leaving the prime minister’s office, he was already hard at work in his old-new office as leader of the opposition. His first job was to rally the ranks and unite the right-wing and ultra-Orthodox parties around him. And, of course, he needed to ensure his standing in the Likud, not least by toning down the frustration and anger that some members of the party felt toward him.

After his defeat, Netanyahu met with all 52 members of the opposition and spoke with each individually. He let them vent before signaling to them that he is “here for the long haul.” He knew that all eyes were on him, as if he was some great military commander, fighting for the great comeback after the Likud and ultra-Orthodox parties lost control of the government and were sent ignominiously to the opposition. He knew that he had to counter their despondence with optimism and convince them that they were on the right path.

Since then, Netanyahu has held frequent meetings with the leaders of the opposition and makes a point of working closely with them. He has, in effect, created a shadow government, with himself at its head. Former ministers now challenge the current government in their areas of expertise.

This strategy has proved effective. The right-wing, ultra-Orthodox coalition has been busy ever since the new government came to office, using every parliamentary tool at its disposal to humiliate the coalition, which is already polarized ideologically. In practice, this means many long nights. Knesset members and ministers can’t get the sleep they need. But the opposition has time, not to mention strength, experience, motivation and a craving to avenge themselves after their defeat.

As aforementioned, the Citizenship Law was the first big test facing the new coalition. It was also its first big failure. The new government had little chance of winning a majority after Ra’am and Meretz announced that they would vote against the law, because it was racist and inhumane. Interior Minister Ayelet Shaked of Yamina was hard at work up until the last moment, applying pressure on those Likud members who seemed reluctant to oppose the law. Chief among these was Avi Dichter, a former director of the Shin Bet, who argued that the Likud should support the law.

Shaked exuded confidence. She was certain that she would succeed. Meanwhile, Netanyahu was waging a relentless battle of wits with the coalition. Rather than show his hand, he left them in the dark up until the last moment.

By early morning, Shaked finally realized that the opposition would vote against the law as a unified front. In a last-ditch effort, she decided to turn the vote on it into a vote of no confidence — thereby forcing Ra’am and Meretz to vote for it. Even this didn’t work. Two members of Ra’am abstained, while Knesset member Amichai Chikli of Yamina, whom Netanyahu regarded as a “personal project,” voted against extending the law. Chikli had already voted against the formation of the new government, arguing that the inclusion of a non-Zionist Arab party was dangerous, and that it ran counter to his promises to the voters — and to the Yamina party’s promises as well.

It wasn’t easy for Netanyahu to defeat the Citizenship Law. After all, he himself had spearheaded the extension of this law during all his years in office as prime minister. In the past, Zionist parties on the right and even from the center had voted in support of the Citizenship Law automatically, ever since the second intifada (2003). The reasons they cited for this were always demographic and security concerns.

Over the last few days, the leaders of the coalition, headed by Prime Minister Naftali Bennett, accused Netanyahu of acting against Israel’s security and his own right-wing ideology for personal and political reasons. “Netanyahu read the Shin Bet’s position on the matter as far back as a month ago, and he is fully aware of it. As such, if he and his fellow members of the opposition vote against the law, they are harming Israel’s security knowingly.” Bennett launched this attack on Netanyahu just hours before the vote, hoping that this would increase public pressure on the opposition and force it to support a law that would otherwise expire that night.

Just 10 days earlier, the right-wing, ultra-Orthodox coalition proposed its own Emigration Law to close all the loopholes in the Citizenship Law and eventually, to enshrine Israel’s emigration policy as a Basic Law. Netanyahu then asked Bennett, Shaked and New Hope party leader and Minister of Justice Gideon Saar to support the opposition’s proposal instead. This appeal to the ideological right wing of the coalition was a sly move, since it offered an alternative to the government’s own law. Furthermore, Netanyahu and all the other members of the opposition argued that since it was their job to bring down this “dangerous” and non-Zionist” government as quickly as possible, it would make no sense to toss them a “lifesaver.”

Netanyahu also served as the leading advocate in the public and rhetorical debate for toppling the legislation proposed by the government. He seemed to be enjoying himself, when he addressed the Knesset July 5, especially when he lashed out against the government’s right-wing ministers: “They turn to us after they have cooked this porridge and tell us, ‘Help us eat the porridge we cooked ourselves. They say, ‘Find responsibility.’”

It was Netanyahu himself who decided on the strategy to take down the Citizenship Law. He worked day and night on it, convincing his allies and rallying the ranks of Likud and ultra-Orthodox Knesset members. In general, ever since he left the prime minister’s office, he seems to be enjoying his new job as head of a shadow government. He has already challenged the inexperienced new prime minister on issues surrounding security, foreign policy and the coronavirus.

Now he plans to go back to the Likud’s huge base across the country, to ensure that his supporters do not abandon the party. A former Likud minister who spoke on condition of anonymity told Al-Monitor, “Netanyahu has a plan to go from city to city, from the north all the way to the south, in order to spur the right and the Likud into action. That way, when there is an election, he will be ready.”